A football player survives in the NFL on the average only three years. The careers of top chess players last 25 years or even longer. They can challenge the world's best already as teenagers and can continue for six, seven decades until they turn into ageless warriors. At what point do they play the best? What is the optimal age for success in chess?

Two major events this year demonstrated how top players, a generation apart, could perform well at high level. When Vishy Anand, 42, defeated Boris Gelfand,44, in the World Chess Championship match in Moscow last June, their combined age of 86 made them the oldest players of this traditional event. Magnus Carlsen, 21, and Fabiano Caruana, 20, shared first place in the Sao Paolo/Bilbao Grand Slam Masters final in October. Carlsen won the tiebreak and the trophy. Let's see some remarkable achievements at different ages.

Bobby Fischer stands head and shoulders above any player age 15 or younger. In 1958, Fischer, 15, qualified from the 1958 Portoroz Interzonal for the 1959 Candidates tournament, securing a place among the top nine players in the world. Nobody ever beat that record. The benchmark is too high. But as a byproduct of his excellent result, Fischer automatically became the youngest grandmaster in the world. That was a different story.

The title and the age attracted many young players and the race was on. Judit Polgar, the all-time best woman, described her drive in her recent book How I Beat Fischer's Record, published by Quality Chess. Judit was rated number 93 in the world when she became grandmaster, overtaking Fischer by 35 days. Another Hungarian, Peter Leko, beat Polgar's record by six days. Sergey Karjakin is the only player who got the GM title under the age of 13 in 2003.

"The grandmaster title is like a driver's licence," the late Yugoslav grandmaster, dr. Petar Trifunovic, once told me. "You can drive a car, but you still need some experience to do it well." He said it in the late 1960s, when there were only 70 grandmasters. The 15-year-olds show talent, but it is still raw and in need of development.

In America, the kids can drive at the age of 16. In Europe, they can drink alcohol. While in 1959 the 16-year-old Fischer played his first Candidates event, three talented Soviet players had only their first experience in international tournaments abroad at that age. Boris Spassky shared fourth place in a strong event in Bucharest in 1953. Anatoly Karpov, shy of his 16th birthday, won in the Czech town of Trinec in 1967. Garry Kasparov won in Banja Luka in 1979. All three became world champions.

Magnus Carlsen became the world's top rated player at 19. This month he turns 22 with his highest FIDE rating of 2848, just three points shy of of Kasparov's record from 1999.

Garry Kasparov became the world champion in 1985, the youngest ever at 22. For the next 20 years, he was rated number one in the world.

Other memorable achievements at the age of 22:
Paul Morphy (1837-1884) returned from his victorious European tour as the unofficial world champion in 1859.
Harry Nelson Pillsbury (1872-1906), scored his greatest victory at the 1895 Hastings tournament, one of the all-time strongest.
The exceptional AVRO tournament in 1938 was won by Paul Keres, 22, and Rueben Fine, 24.

The age of 22 seems to be significant. Professional players are often born at this age and chess becomes a major part of their lives. They begin to stabilize their play. At the same time, a lot of talented players leave the game. They usually finish their studies and look for jobs.

Some very talented players became world champions in their early twenties: Mikhail Tal did it at 23, Anatoly Karpov at 24, Emanuel Lasker and Vladimir Kramnik at 25.

Around the age of 30, top chess players consolidate their play and may achieve their goal combining experience with energy. Fischer became world champion at 29. Spassky was considered the world's best player in 1966 at the age of 29, but failed to beat the world champion Tigran Petrosian in their match.

This is the age, plus minus three years, when chess careers peak.
Alexander Alekhine was 35 when he became the world champion by beating Jose Raul Capablanca in 1927 in Buenos Aires.

We see Jose Raul Capablanca and Tigran Petrosian clinching the world title at 32. Max Euwe did it at 34. Two old rivals, Mikhail Botvinnik and Vassily Smyslov became chess kings at 36.

Everything above this age is a bonus. The players begin to think about retirement and some of them depart from the spotlight. Kasparov left professional chess shortly before his 42nd birthday in 2005.

Some grandmasters in their forties are still hanging on and perform well. Anand is the current world champion at 42. Vassily Ivanchuk, 43, was in the Top Ten on the FIDE list most of this year. Boris Gelfand, Anand's challenger, shared first place at the FIDE Grand Prix in London in October at the age of 44. Motivation is key.

Karpov played his best tournament in Linares in 1994, at the age of 42. He finished 2.5 points ahead of his next rivals, Kasparov and Alexei Shirov, scoring 11/13. But six years later, Karpov dropped out from the Top Ten FIDE rating list for the first time in 28 years.

After being considered the world's strongest player for 20 years, William Steinitz finally became the official world champion in 1886 at the age of 50.

Botvinnik played his last tournament in Leiden in 1970 at 58.

At the age of 63, Smyslov was just one match away from playing at the 1984 World Championship, but he lost the Candidates Final to Kasparov.

The players are not expected to triumph anymore, but they can have fun. At the age of 72, Miguel Najdorf, the late Polish/ Argentine grandmaster, scored a decent result in a super-tournament in Bugojno in 1982. Kasparov won the event and it was his first victory in an elite tournament. After it was over, Najdorf came to me.
"Kavalek, today is your lucky day!"
"Why, Miguel?"
"Because today you shared place in a wonderful chess tournament with the great Najdorf!"

Viktor Korchnoi, the two-time finalists in the world championship matches (1978 and 1981) still competes with fervor. He is ageless.

Rook and Knight vs. Rook

Last Saturday Karpov won the Trophy of Anatoly Karpov in Cap d'Agde, France. It was an elimination rapid event and in the final match Karpov, 61, narrowly defeated Ivanchuk, 43, with a 4.5-3.5 score. Karpov played well against Ivanchuk in the past, but his victory was surprising.
A mating attack in one of the games reminds us of a game played by Mikhail Tal in 1968. 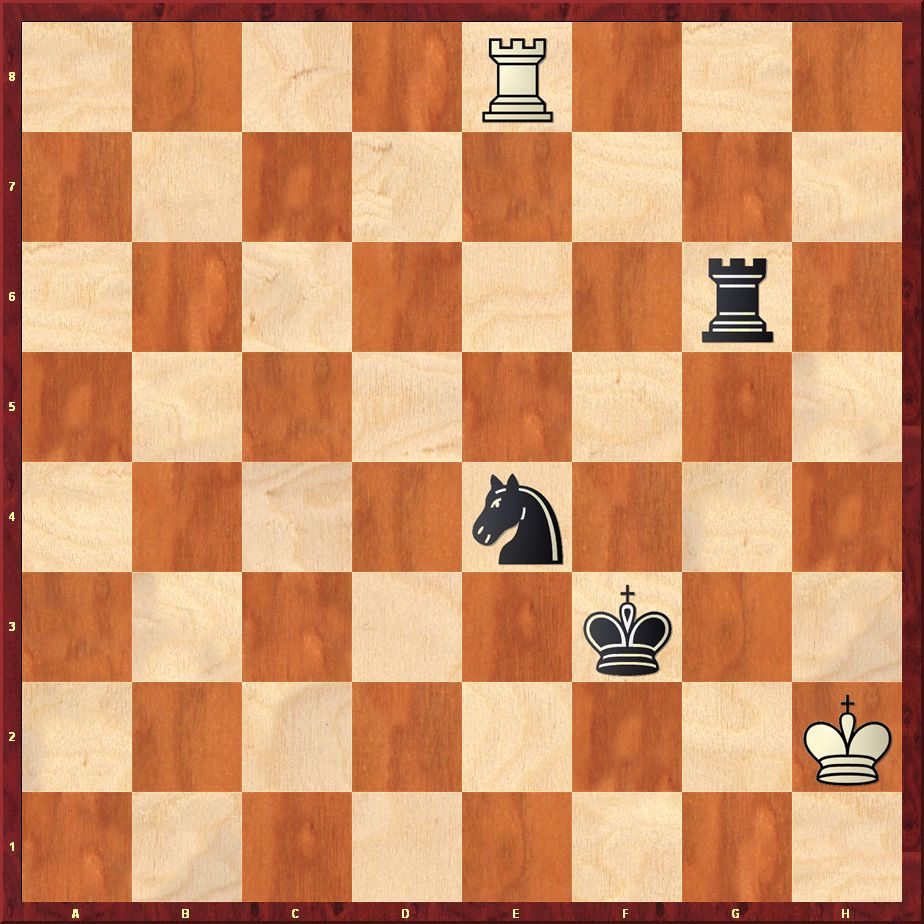 Karpov has Ivanchuk's king in a mating net. He makes sure the king doesn't escape.

In 1968, Mikhail Tal played against the readers of Komsomolskaya Pravda, a Soviet daily. They reached a position where only one knight move led to a win. 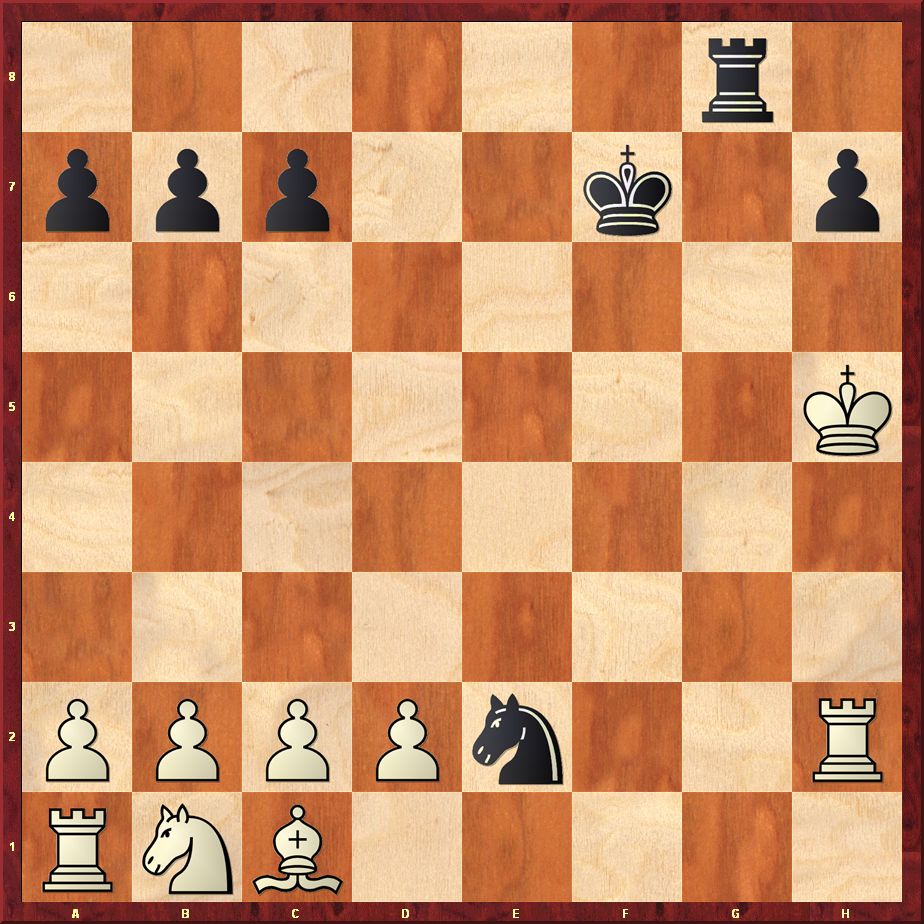 Solutions to Chandler's puzzles from the last column: