What is Santa's backstory?: originally appeared on Quora: The best answer to any question. Ask a question, get a great answer. Learn from experts and access insider knowledge. You can follow Quora on Twitter, Facebook, and Google+.

Answer by Bill Petro, been writing "History of the Holidays" online articles since 1984 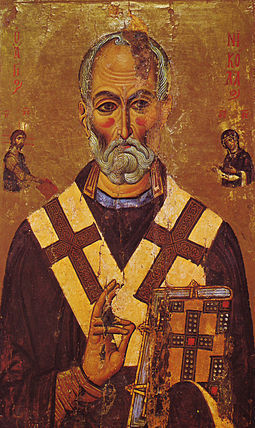 December 6 is "Saint Nicholas Day." Santa Claus, a contraction for Saint Nicholas, was born in the 3rd century, perhaps in A.D. 270. He became a bishop in Greece and gained distinction in the councils of the church, being especially famed for unexpected gifts, and later associated with the giving of presents during the season at the end of the year. "I am Nicholas, a sinner," the old saint would say, "Nicholas, servant of Christ Jesus."

He was imprisoned during the great persecutions under the Roman Emperor Diocletian in A.D. 303 but freed by decree of Emperor Constantine. Thereafter, he served as Bishop in Myra for another thirty years. Nicholas participated in the famous Council of Nicaea in 325. He died on December 6, about 343, and the Feast of St. Nicholas is now held on that day.

Many stories are told of his kindness, such as the one of the poor man and his three daughters. To save the daughters from being sold into prostitution for want of dowries, St. Nicholas dropped a bag full of gold down the man's chimney. It landed in one of the stockings the eldest daughter had hung up to dry. Now she could be married. The other two daughters quickly hung up stockings for St. Nicholas to fill with gold, so that they, too, could soon be married. By the way, the three gold globes of the pawn shop are attributed to this story.

He seems to have been adopted by the Netherlands as the patron saint of children, and there, on St. Nicholas Eve, they leave their wooden shoes, or sabots, filled with hay for the Saint's white horse. He is real to children the world over, under various names as Kris Kringle, La Befana, Yule Tomten, and Christkindli.

In 1809 the American author Washington Irving, under the pen name Diedrich Knickerbocker, wrote "A History of New York," wherein Saint Nicholas, a jolly personage smoking a Dutch pipe, skimmed over the treetops in a wagon and dropped presents down the chimneys. 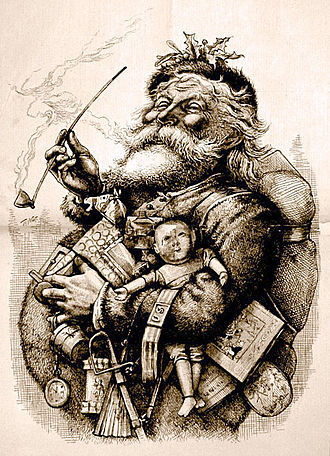 A few years later, in 1822, Clement C. Moore reputedly wrote a poem for his own children which is most often called "The Night Before Christmas." However, Don Foster in his book Author Unknown, makes a case that Henry Livingston actually penned it in 1807 or 1808. But whatever the case, the correct title of the poem is "A Visit from St. Nicholas." Many are unaware that never once in the poem was used the term Santa Claus, although the reindeer are there, a part of the legend undoubtedly developed in America, probably by Scandinavians in the United States.

During the Christmas season of 1862, Thomas Nast, the cartoonist, drew a picture of Santa Claus for Harper's Weekly at the time of the Civil War. Nast combined his own native German traditions of Saint Nicholas with other German folk traditions of elves in creating the image, seen at right. His various pictures of Santa Claus ran through 1866, firmly cementing the image in the American mind. The name Santa Claus also became more familiar to American ears than the German Sankt Niklaus or Dutch Sinterklaas.

Finally, in the 1930s that the now-familiar American Santa image solidified. The artist Haddon Sundblom began Coca-Cola Santa advertisements running for thirty-five years which finally established Santa as an icon of contemporary commercial culture. This Santa was not an elf, but a man -- jolly, and wearing the now familiar white fir-trimmed red suit.

There is an alternative view. Some believe Santa Claus was originally Polish. North Polish.