"My dream is to be a stay-at-home mom and wife."

Those were the words uttered to my loving husband more than 10 years ago.

First, laughter (and I mean the gut-wrenching belly laugh type). Then, a look of utter confusion.

"Honey, I'm not trying to be funny but you're not built to be a stay-at-home mom. Every day, I'd come home from work and the kids would run up to me, 'Daddy, please save us from mommy! She's trying to turn us into another one of her projects!'"

The pure horror expressed on his face while pretending to do what he envisioned our children would do instantly flipped a light switch on in my head.

He was right. OH SO very right. I would likely drive our children insane as a stay-at-home mom.

I know this, in part, because early into our marriage my one attempt at being a stay-at-home mom quickly went down in flames.

It happened in 2004, shortly after an abrupt resignation as the business manager of an award-winning restaurant.

Following my decision to give back my minority ownership stake, Keith thought it would be a good idea if I took off a few months before returning to work.

That sabbatical was short lived. (Keith jokes it was so quick it's like it never happened.) Within weeks, I was consulting on various projects and working to free a death row inmate in Texas I'd stumbled across online. (Long story...)

Before the end of the month, I'd hired private investigators, consulted famed defense attorney Tom Mesereau (who happened to be thick in the middle of a trial defending Michael Jackson), began giving the defense attorney instructions, and in less than 12 months that young man was off death row.

Within the first week of my so-called sabbatical, I realized being a stay-at-home anything is simply not the way I'm wired. At least not then (and even now, a decade later).

Somewhere along the road of life, I'd bought into the notion that I'd be a better wife and mom if I remained at home. My husband freed me from that thinking and encouraged me to embrace the woman God created me to be.

My friend, Courtney Joseph, author of Women Living Well, absolutely LOVES being a homeschooling stay-at-home mom and wife with sole responsibility of domestic duties. It's been her desire since she was a little girl and she's now living out that dream. The first time I met Courtney, I found it incredibly refreshing to see the pure joy in her eyes when she talked about being a stay-at-home mom and wife.

The same excitement I feel when teaming up with my husband to flesh out a business idea or start a new company is what Courtney feels after completing her daily domestic routine of cooking, cleaning and serving her family.

Courtney is the perfect example of the proper role of a 21st century wife.

Courtney loves her life and is the perfect wife for her husband, Keith.

I love my life and am the perfect wife for my husband, Keith.

(Yes, we really do have husbands with the same name who both love, honor, adore and respect us.)

Radical feminists have long tried to define the role of wife. So have conservatives, liberals and the media. When I released my book, Happy Wives Club earlier this year, media across the pond pounced on it and said I was returning women to the 1950s. (Clearly, the press in the UK had not actually read the book.)

So what is the proper role of a 21st century wife? Whatever you want it to be. Whatever brings the most joy to you and your spouse.

You are beautiful. You are wonderful. You are unique. So don't make your role as wife look like a cookie cutter image of anyone else. Don't allow anyone outside of your home to define the roles within it.

Free yourself from the judgement of others. Follow your passions. Don't be afraid to dote over your spouse or to give everything to your marriage. There are only two people in this world who should define the proper role of husband and wife in your household: You and your husband.

QUESTION: How do you define your role as wife? 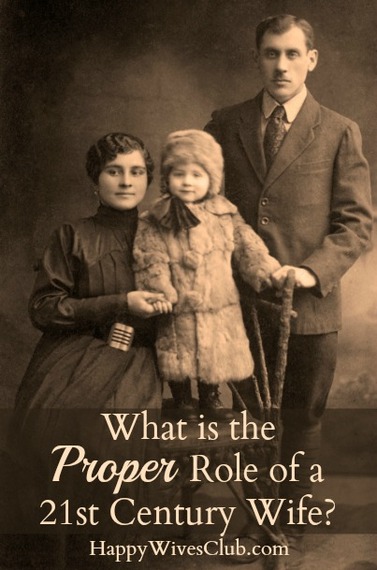