What would happen if the wage gap finally disappeared? We know women would be making more money, but how much more would they be bringing home?

By now, you've probably heard depressing statistics like this one: For every dollar a man earns, a woman makes 77 cents. You might even be sick of hearing it. Until you add all those pennies up, the gender gap will cost the average American woman more than $400,000 over the course of her professional life.  What could that buy? What could you save? What could you invest in?

With that money, a woman could buy a house, put two kids through college, buy more than 21,000 gallons of gas and feed her family for almost seven years. Care about the gender wage gap now?

What can this difference buy in your state? Let's take a look at Virginia, for example. The gap in Virginia, according to National Partnership, means that a family headed by a white male can purchase almost two more years' worth of food, six more months' worth of utilities, two and a half years more insurance payments and a full year's rent.

Now that we know how much the gender gap costs women, lets look at how it affects men. Thanks to the gender gap, life is 33% cheaper for a full-time, year-round male worker than it is for the average woman. In other words, men have 33% more spending power. And that's a big deal. And it's unfairly impoverishing millions.

More important than what these funds can buy, however, is the amount of money they can save. The pay gap helps some people accumulate wealth and achieve long-term financial security. In fact, it's a critical part of the wealth gap, the unequal distribution of assets. In the United States, a woman who has never been married typically owns .06 cents for every dollar owned by a never-married man.

If you think those numbers are outrageous, they are even more drastic when placed in the context of single mothers and single fathers. In 2006, just under 18% of single fathers fell below the poverty line. That number was more than 33% for single mothers. Women, especially single and divorced and widowed women, are more likely to be what Stanford Professor Mariko Lin Chang calls "wealth poor," someone possessing no assets or suffering from debts that outweigh the value of their assets.

The commonly cited .77 cents to the dollar number oversimplifies a gap that reflects several factors impossible to encapsulate in a sentence, for example, sex segregation in the workplace and the long-term impacts of working part-time or full-time. The gap differs by occupation, by race and ethnicity and within ethnic groups.

It is indisputable, however, despite the fiction of a "debate." 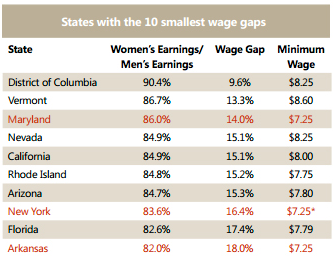 Wage gap deniers, who, let's be honest, often happen to be white males (can someone please start a Tumblr called "White Guys Who Don't Know The Gap Exists"?) will tell you that women just choose professions that make less money. The Bureau of Labor Statistics catalogs 534 job types. Men make less than women in precisely seven of them. Last week, Tennessee Republican Lamar Alexander demanded to know what gender gap legislation would do to help them.

Sure, OK, if you want to call systemic institutional forces that shape our decisions, career focuses and opportunities from the moment we step out of the womb a "choice." With that logic, you might as well call the fact that women make up more victims of sexual assault and domestic violence choices. Women choose to win lower wages just as much as they choose their gender, ethnicity or race. Given the choice, I'm sure African-American women would choose to make more than 64 cents and Hispanic women would prefer to make more than 54 cents, for every dollar that a white man receives. Making the assertion that the wage gap is somehow women's fault is not only sexist, it's racist too.

Another popular misconception is that women's wages are increasing every year, when in fact, rigorously documented annually by organizations such as the American Association of University Women, the wage gap hasn't budged since 2002. In fact, the workplace still looks like a lot like a typical "Mad Men" episode (minus the day drinking). The top jobs for women today are the same as they were in 1950: secretaries and administrative assistants -- 96% of whom are women. Since equal pay was signed into law in 1963, average wages for women have only increased by 18 cents.

So, what can we do? One of the single most effective strategies to reduce the gender pay gap would be to raise the minimum wage, something that Senate democrats will be voting on today along with Paycheck Fairness Act. Although it's projected to pass the Senate, it probably won't pass in the Republican-controlled House. Clearly, only one side of the aisle gets it.

Your typical minimum wage earner is not a pimple-faced teenager flipping burgers -- it's an adult woman. Since more than two out of three primary minimum wage workers is a lady, increasing the minimum wage would actually result in a raise for more than 15 million female workers. Women, especially women of color, make up 66% of jobs involving "tipped wages." Do you know what the minimum tip wage minimum wage is? It's $2.13 an hour. It hasn't been changed in more than 20 years.

Another key intervention that has the potential to lower the wage gap is paid paternity leave, something that's still (somehow) the focus of derision. After two radio hosts mocked a baseball player for being a total pansy for like, you know, wanting to help his wife with his newborn baby (what a wuss!), it gave way to an long-overdue conversation about the importance of paternity leave.

The reality is, nations who have implemented paid paternity leave like Quebec or Sweden have seen a dramatic increase in men's share of domestic and child care tasks. Studies also show that when women aren't slaving away over the family stove every night, they happen to have more time to focus on their careers. Shocker! The same logic follows for the minimum wage. States that have increased it, show the smallest disparities between women and men's wages. These two policy interventions, that are largely backed by the American people, but largely blocked by Republicans, could help us finally make the wage gap ancient history.

The U.S. ranks No. 1 in Miss Universe wins, but, look at that: we only rank 67th for "wage equality for similar work" between men and women among 135 countries representing most of the world's population. Clearly, we need to put our priorities in the right place. Let's send a clear message to politicians and policy-makers, by reminding them what the wage gap costs us all.

Use the #WithoutTheWageGapIWould hashtag to share what you would buy or invest in if the wage gap didn't hold you back.

What You Can Do About The Pay Gap 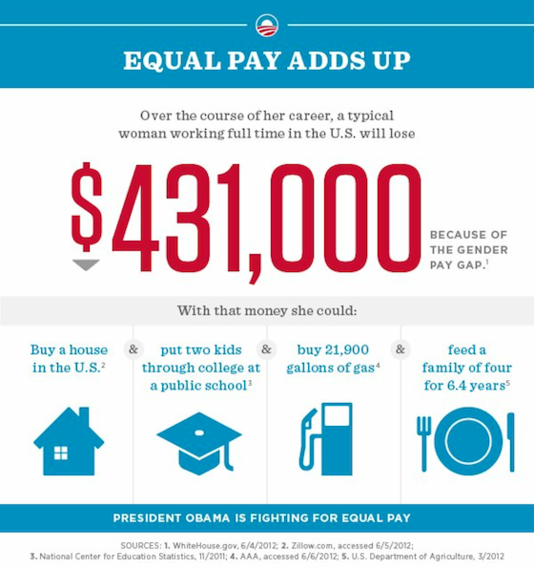