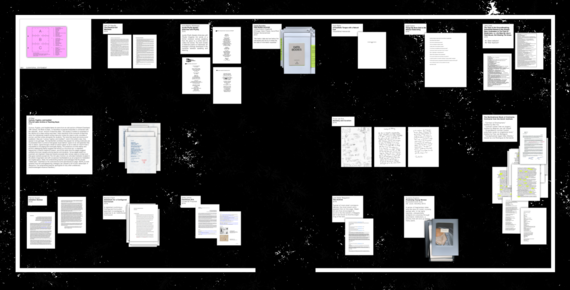 Waste defines modern existence. A globalized culture of consumerism ensures that trash undergirds and oozes into every facet of our lives. Detritus haunts us and props us up. The presence and impact of physical trash is (by now) easy to grasp, but what does it mean when filtered through the digital?

Caroline Picard and Lara Schoorl decided to pose this question back to us, and the result is Institutional Garbage, an exhibition rooted in the praxis of waste, presented by Chicago's Sector 2337 and The Hyde Park Center. Installations range from complete poetry manuscripts to emails to webcam videos. The space itself ran from September through the end of this year, and when the clock strikes midnight on January 1st, the exhibition disappears forever (at least in this particular iteration...but more on that later). 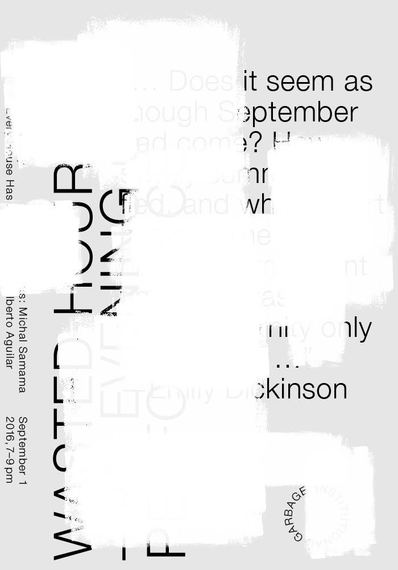 Struck by the avant-garde approach to the very notion of art and its display in the metamodern era, I communicated with Schoorl several months ago. And then, in the meantime, life got ahead of me (in part rooted in the very garbage the two set out to examine). Still wanting to shine a light on one of the year's most fascinating exhibitions with the timer ticking, I reached out one more time last week with questions that I hoped would re-instigate the conversation (and atone for my tardiness). The response I received was (somewhat expectedly) unexpected, so, bearing the ethos in mind, I'm reposting it in full here.

Lara Schoorl: Jesse, thank you for finding time for this correspondence! I think we all wish we were one of these writers.... Or not. Often the things that keep me from writing are the things I need to write about and for. Also this delay and slowness suits both the in-process format you suggested and the exhibition we are here to talk about. Since it's an in-process interview, can we keep the message that prefaces your questions? My first response is to that message:

Lara, hi, hello! I'm so sorry the time has evaded me. I wish I could be one of these writers that just dashes off articles. BUT In the interest of having a piece of capstone press, I was thinking, let's do a process interview? I tried to make the questions sassy...let me know if it worked. Also, if you have other thoughts to add outside the questions, answer them in the "other trashy thoughts" section and we can reverse engineer questions. Oh, and feel free to split duties with your co-pilot. Either way, holler 'em baaaccckkk.

From our prior correspondence, I know you considered asking me questions to guide you through a review of our on-line exhibition, Institutional Garbage. I think it is interesting how that prospective review becomes an interview after all. It makes me wonder about the accessibility of Institutional Garbage as well as about writing about non-tangible art and spaces more generally. Some of the technical aspects of our online space ask visitors to take their time and have a bit of patience--demands that seem anachronistic to the internet which typically prioritizes speed. Nevertheless, I'd like to think that an online exhibition might be more accessible than some gallery exhibitions, even if you need access to the internet. 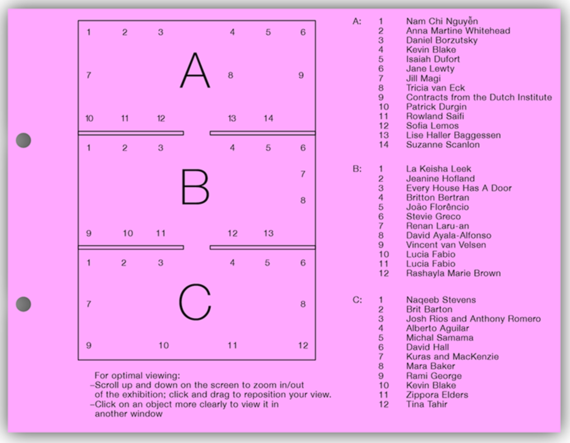 Jesse Damiani: What is all this garbage, huh?

Caroline Picard: I know, right? My namesake in print is an editor for Good Housekeeping and as such I am constantly getting her press releases--for instance IKEA's 2017 Pantone color of the year is the "trans-seasonal shade" Greenery. Or Soleil Moon Fry's latest line of Easter Decor. Or the fact that each press release encourages readers to save the environment and not print it out, while encouraging the production, consumption, and discard of material goods. It brings me back to a newspaper job where I printed out press releases and compiled my favorites in weekly shopping calendars for readers. The office printer was right next to a staff kitchen that smelled permanently of microwave popcorn and I used to sift through failing budget reports to find my own documents. Recently, I ran into the Ayn Randian who joined the work force right before I left; he has somehow maintained his rule to never bring anything to a potluck. Perhaps what's most depressing is that he said our old boss wants to take an all-expenses paid trip to Macedonia and interview people behind the fake news headlines that claimed Pope Francis forbids Catholics from voting for Hillary, or how 300 buffalo allegedly joined the protest at Standing Rock.

LS: Last May, my friend Zoë and I walked around looking for morning glories. We found them wrapped around chain link fences and sprouting through concrete, in the darkest places of the neighborhood. They are one of Zoë's favorite plants and we planned to re-pot them; we thought they would thrive in a sunlit space with fresh soil and water, but they died within an hour of their transplant. 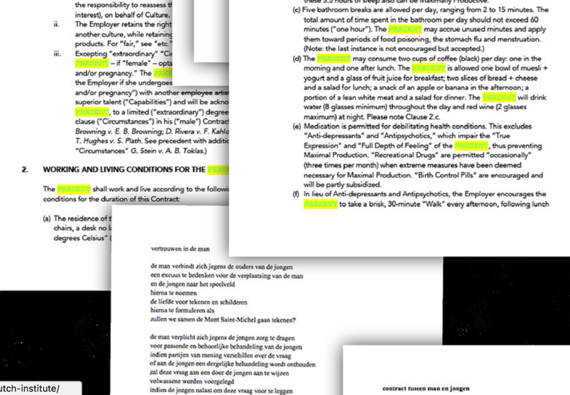 JD: Why even bother?

CP: Sometimes I dream that I'm at work looking at the blank wall of my office. And then I go to work and stare at the same wall. Once I discussed plans for an art space with a prospective landlord. His son ran the bar upstairs and came down to ask what kind of business my friends and I wanted to open. The dad said poetry, "They want to have poetry readings," and the son starting heckling us in Spanish -- the gist of which was like, "Check out these nerds!" We didn't rent the place but I did open a gallery down the street and we host poetry readings all the time. I think it's easy to ask what is the point of art but I'm not sure it's a useful question. Would you ask that of something like Spring Break? I'm suspicious of anything that claims to be direct, on message, and without ambiguity.

LS: Caroline's dream is my reality also. I am writing this secretly at work staring at a grey wall of my cubicle while contemplating your questions and Caroline's responses. Over the last few weeks I have asked myself, why do I sit here underpaid at a for-profit company while there are people murdered or left dying in Palestine, in Syria, in the streets of Los Angeles, all over the world? I could be underpaid -- even un-paid -- at a place that does more. In mornings and evenings I volunteer for The Green Lantern Press to work on projects and collaborations like Institutional Garbage. An equally non-productive answer is just; "Why not?" 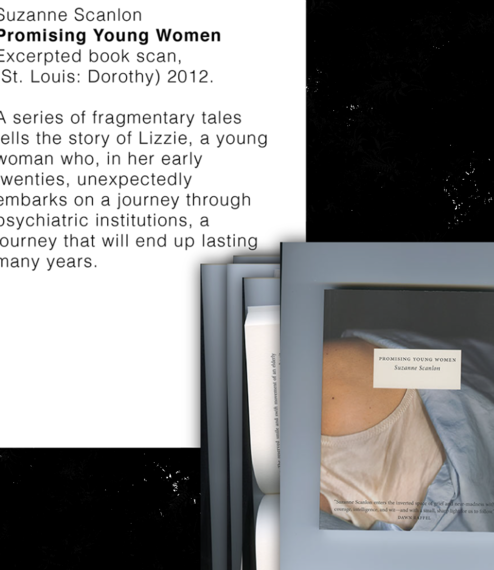 JD: Why should I care about this trash? (What will I, Joe Audience, get from IG?)

CP: This sounds like another iteration of the last two questions, but maybe you are being clever. Are you illustrating the limitations of the interview form? Where every question is the same as the last? And since we are discussing imaginary trash, your question is also a kind of trash? A gesture toward empty convention? I saw a Mabou Mines production of Ibsen's DollHouse years ago. All of the female parts were played by very tall actors. Because the leading men were around four feet, the women had to contort their bodies in hysterical ways to maintain eye level with their partners. But maybe you're tricking me with this generic archetypal viewer: Who is Joe Audience? Is this the same imaginary plumber politicians defer to? What's their click-bait? And what about all of the data trails you leave behind wherever you go? Isn't that another example of institutional garbage?

LS: For his installation, Stand Alone, Thomas Hirschhorn takes sourced images of mutilated, decapitated, and violated male bodies and places so many on cardboard boxes that you can hardly focus on any one individual. Initially installed in Berlin, he points out the unacceptable violence done to humans by humans in the Iraq war, critiquing structures that would normalize such violence. Seen here, in Los Angeles, the piece inherently refers to harm done to marginalized groups of people in America. In each location, the individual body is second to the systemic injustices that led to their unjustifiable death. In an accompanying text to the exhibition Hirschorn asks, "Where do I stand?" followed by "Where do you stand?" So I understand, he is not looking away from violence, but I wonder: what are the politics of these images? Can anyone use the bodies of individual people to let an art audience know that you don't close your eyes?

JD: How has the community (digital, person-al, or otherwise) dealt with the garbage?

CP: I don't believe humanity has dealt with its garbage. This is the point of the Plastic Trash Vortex, the film Containment, or the dark web shopper-bot exhibition from 2015. 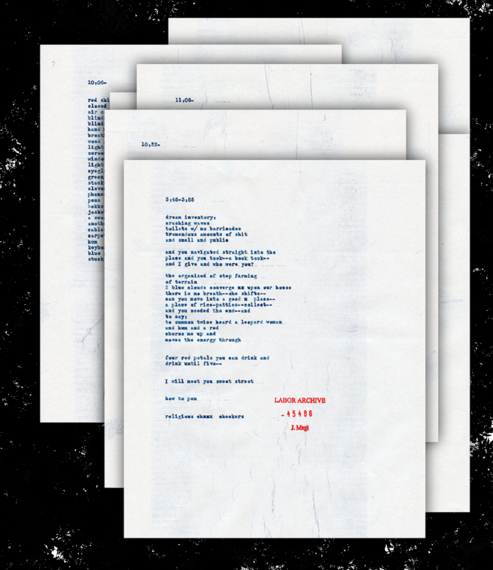 JD: What are snippets of advice you would pull from Institutional Garbage for handling a dark future? Or to address the nature of love and the cosmos?

CP: Join the women's march and protest on January 21. Make a lot of noise. Practice radial openness. Pay attention. Resist the easy way out; it's rarely interesting or long lasting. Resist clean narratives with singular heroes who triumph at the end (especially if they claim to save everyone else). Listen to those who tend to say less. Oppose rugged individualism. Undermine bullies. That's advice I'm following but I don't think it necessarily comes from Institutional Garbage.

LS: Perhaps words like "success" and "winner" should be reconsidered. 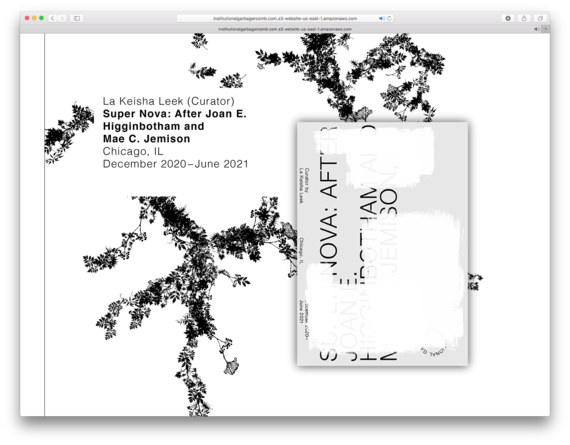 LS: The exhibition will disappear from the Internet on December 31, 2016. But will it really be gone?

CP: We have decided to make a post publication of Institutional Garbage that archives our no-longer existing imaginary institution. This will be published with The Green Lantern Press in 2017. 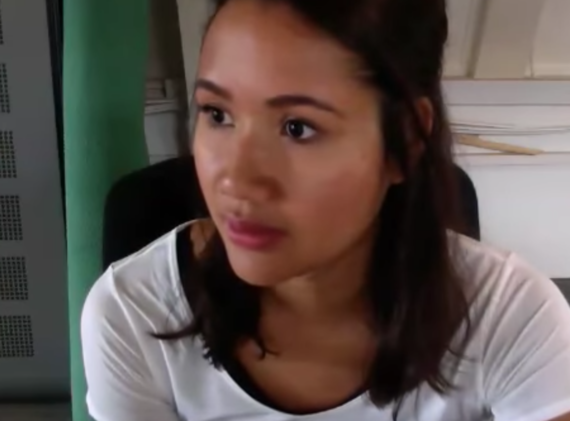 LS: I want to repeat a sentence that one of the contributors of Institutional Garbage, Zippora Elders, shared in an article about gender and art. It was whispered into here ear by an artist: "If you reject heteronormativity and embrace the darkness, you will find your brothers and sisters within." Perhaps we can whisper that into the ears of those conflicted about asking "Why?" 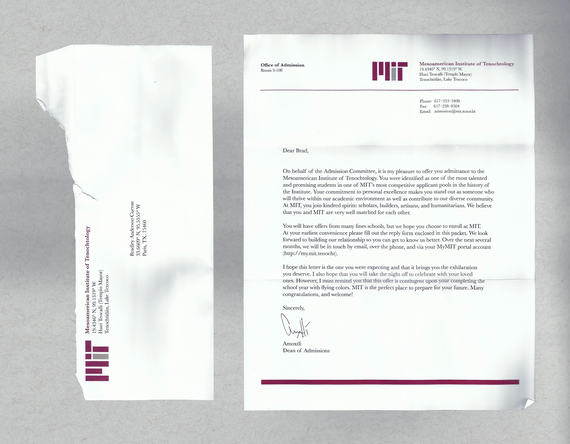 Institutional Garbage is here for a few more days. Don't miss it.