I started to define travel while hanging freely in a forward bend during yoga in Ljubljana, Slovenia.

I've taken yoga classes all over the world -- from Tulum, Mexico where the teacher taught in a barely-audible whisper causing my friend and I to immediately launch into can't-breathe-it-hurts-laughter following class, to Buenos Aires, where the entire class was taught in Spanish and the only word I recognized for 90 minutes was "respira" (breathe).

But that's why I love practicing yoga outside of my element: While the word for "breathe" may be spoken in the native language of whatever country I'm in at the time, I'll eventually recognize it as it's used frequently throughout and the only audible direction I need to guide me through the asanas. The breath, as most yogis will tell you, is the universal link in all that we do on -- and off -- the mat.

Go on. Try living without it.

The class in Ljubljana was intimate; there were just eight of us. It was a standard Vinyasa flow, and while I wasn't dripping with sweat, it was challenging enough to loosen me up and stretch me out. Ironically, it was taught in English.

And so the best part of the class was the teacher's use of a certain verb.

As we spread our arms up above our heads, she said, "Inhale look up," and then just before we dove back down, "exhale and travel down."

Did you catch it?

I hung there, my head in between my legs, my ears tickling my inner thighs, and noticed a smile forming upside down on my face.

Then, toward the end of class, she used it again: "Feel the energy traveling through your spine."

How apropos, I thought. There I was on day five of a three-week journey that'd take me from Ljubljana to Zagreb, Croatia, to Split, Dubrovnik and Hvar, followed by Tel Aviv, Israel by way of Stockholm, Sweden.

Energy is always traveling through my spine -- especially as my spine allows me to travel the world.

At the end of class, as I lay on my back, arms stretched in Savasana, I attempted to quiet the mind. Key word being "attempted." Really, I was fixated on that word: travel.

What is it anyway? It's relative, that's for sure. Journalists and traveler bloggers, present company included, share recommendations and suggestions in the hopes that other people will benefit from their own great experiences, but the bed they may have found comfortable at that St. Germaine hotel in Paris, you may find too hard; and the rooftop airport lounge that provides great views of Zagreb may not be open when you pass through. (True story.)

In my inhaling and exhaling around the world through the years -- from Bath, England to Bangkok, Thailand -- I've accumulated a host of experiences that define the great privilege of worldwide travel for me:

Travel is...
...seeing the same group of tourists you shared a pletna boat with on Lake Bled two days later on the train to Zagreb.

...crawling into what you thought was a lush king-size hotel bed at the end of a long day, only to realize in the middle of the night it's too twins pushed together. And not caring.

...walking through the pouring rain, with all your luggage, but without an umbrella, for an early train to somewhere.

...getting lost, giving up, and then finding exactly what you weren't looking for straight ahead.

...happening on a packed street concert of a popular local band that had been rescheduled twice due to rain -- and getting a front row seat.

...leaving your hotel at 9a.m. and not coming back until midnight -- or the following day.

...listening to an album so many times in one place that whenever you physically leave and listen to it again, you're right back where you first pressed play.

...communicating with locals through hand gestures.

...having anywhere between two and five currencies in your wallet at any given time.

...being so tired you can still fall asleep after having coffee at 10p.m.

...having an internal alarm clock.

...constantly struggling with the 24-hour one.

...getting a ride from fellow hikers back to your car, which is parked at the beginning of the harder trail you don't have the energy -- or the courage -- to repeat.

...realizing you've lost your sunglasses as soon as the rain lets up.

...buying an umbrella and seeing the skies clear 15 minutes later.

...entering the Picasso Museum in Paris only to be told it's closed for renovations and then happening upon the entire roving collection during a 12-hour layover in Zagreb two weeks later.

...staying awake the whole ride just to finish your book and start another.

...flipping through your passport immediately after being stamped to see what it looks like.

...having to buy a bathing suit because you've been away so long the seasons have changed for what you packed and where you're going.

...talking to yourself. A lot.

...talking to strangers. A lot.

...getting proper excited when your hotel room comes with shampoo and conditioner.

...asking for extras. And extras of the extras.

...thinking you've broken the window in your hotel room when really you're just doing it wrong.

...getting a free ride because you were supposed to "validate" your ticket on the last one.

...having way too much time to kill at an airport half the size of your high school football field.

...seeing them shut the lights at the only food and beverage option at said airport. 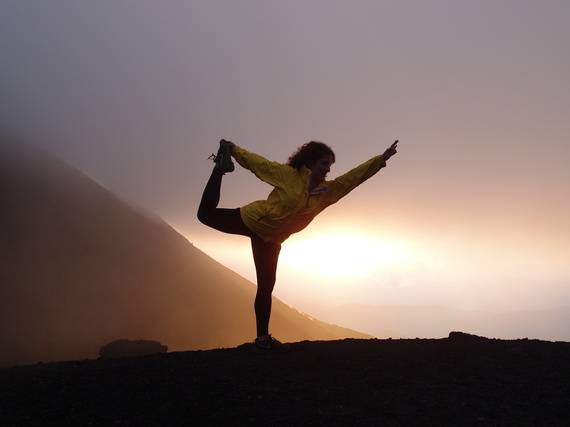 More:
yogaSloveniabenefits of yogaadventure travelLjubljana
Newsletter Sign Up
An essential daily guide to achieving the good life
Subscribe to our lifestyle email.
Successfully Subscribed!
Realness delivered to your inbox