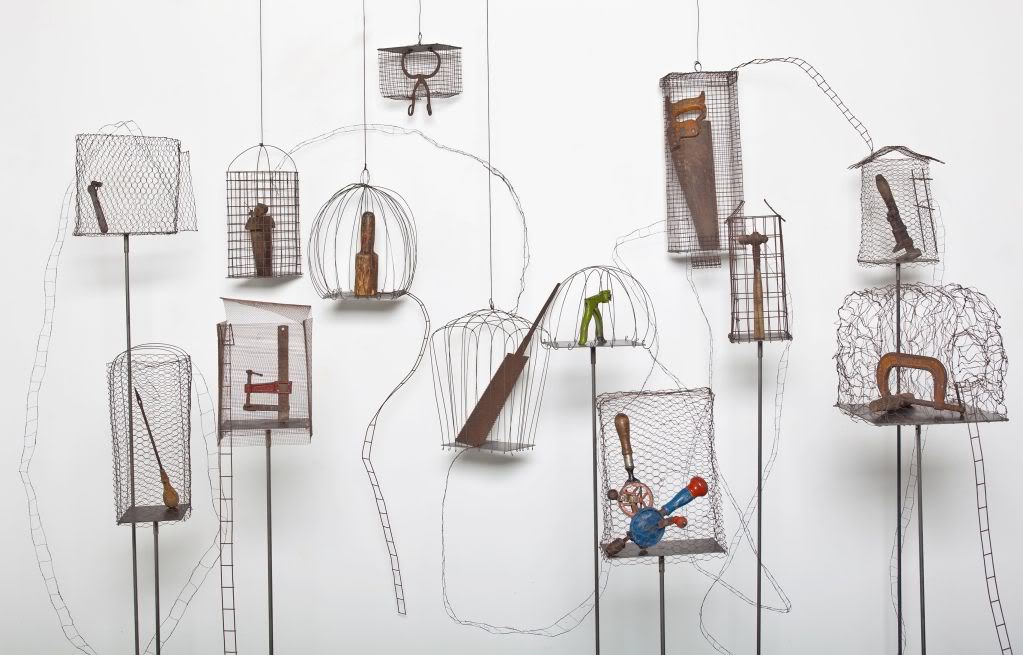 Maddy LeMel: Suspended States | LeMel has been called a "scavenger poet," and is known for mixed-media constructions incorporating found objects that are reclaimed and given second lives in pieces created with wire, screen, thread, paper, metal fragments, and a deft articulation of light and space.

LeMel's new pieces for Suspended States are spare yet animated wire and metal cages containing vintage tools, which exist as almost anthropomorphized characters contemplating the nature of entrapment. These characters also seem to be sizing up exit strategies presented by openings in each cage that allow for escape. Connected by winding ladders, the works form a cohesive installation, suggesting that situations and relationships between individuals can cause patterns of restraint to ripple into society as well along with opportunities to transcend such limitations. In a catalogue essay for LeMel, art critic Constance Mallinson wrote, "This uncomfortable limbo signifies the stage between possibilities, prompting us to ask, as LeMel has, what is worth saving or discarding, and ultimately how we can be transformed." 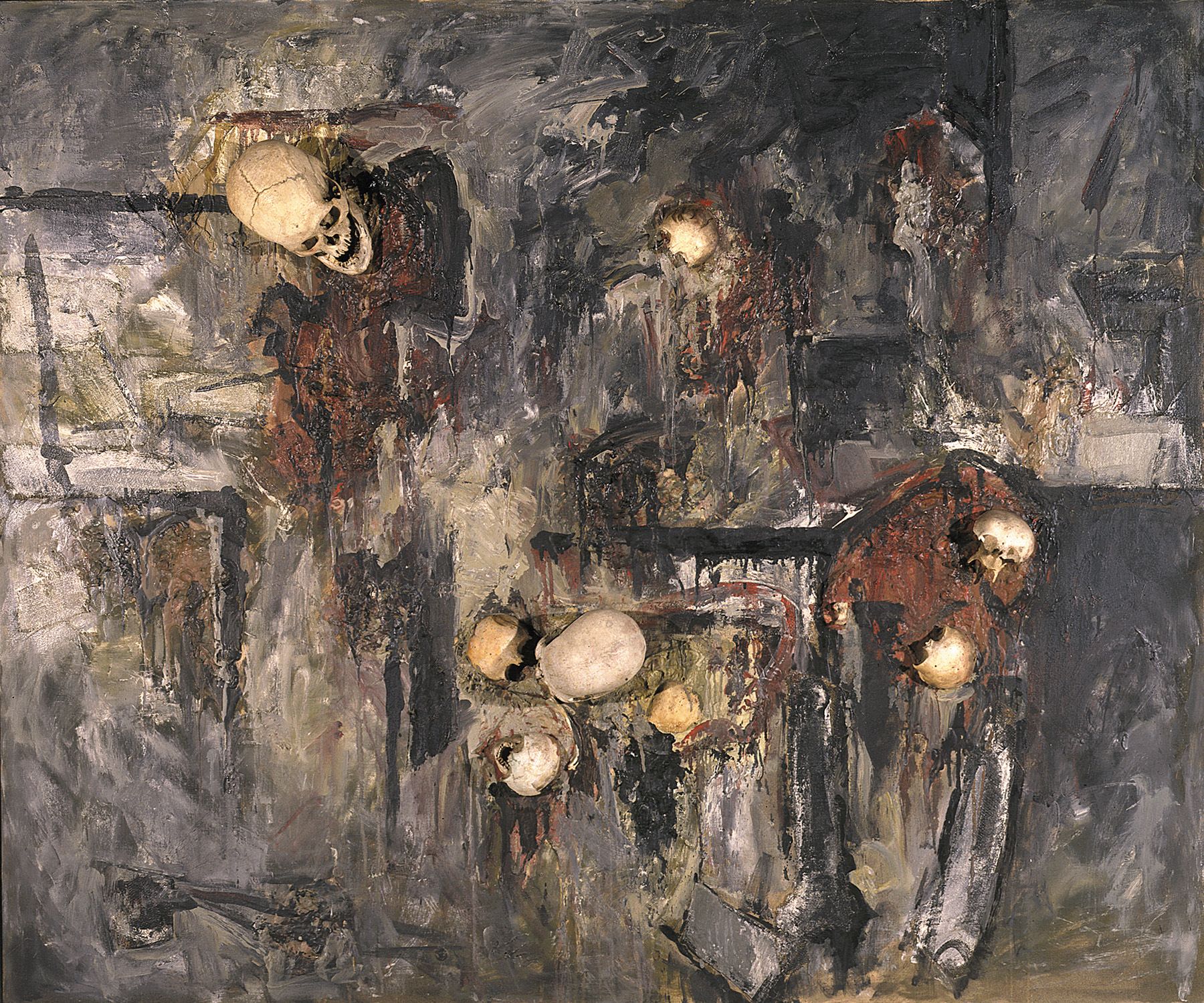 Hans Burkhardt: Within & Beyond The Mainstream | Burkhardt represented the most significant artistic bridge between New York and Los Angeles. When he moved to Los Angeles late in 1937, he forged an independent course, pursuing an abstract expressionist style; often anticipating the work of his contemporaries and later artists in the both the East Coast and Europe.

In the 1960s, Los Angeles art was seduced by California Light, Hard Edge, Minimalism and Pop Art. In contrast to the cool aesthetic of L.A., Burkhardt, in typical independent manner, created paintings of unprecedented emotional power. Among them is a masterpiece, My Lai, where real human skulls are embedded into a scumbled painterly surface so poignant as to represent the consummate altarpiece. Works of this period predate paintings by later artists such as Anselm Kiefer by some twenty years. Art historian Donald Kuspit states: "Burkhardt is a master - indeed, the inventor - of the abstract memento mori."

Hans Burkhardt: Within & Beyond The Mainstream runs through December 24 at Jack Rutberg Fine Arts 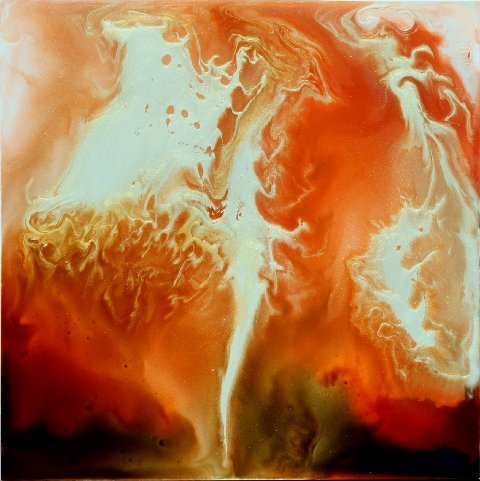 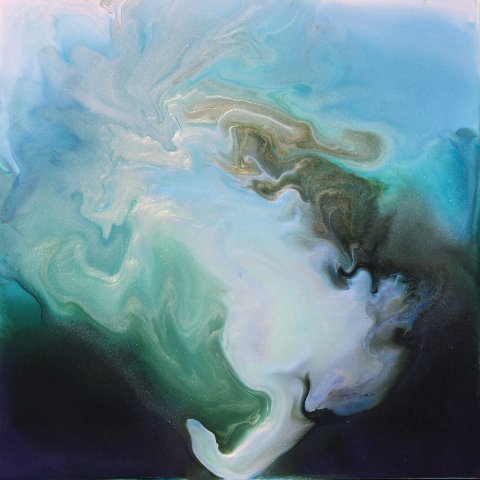 The Gleam in the Young Bastard's Eye: Finish Fetish & the Continuing Fascination with Sensuality of Surface in Contemporary Art | In the early 60's, artists such as Billy Al Bengston, Larry Bell, Craig Kaufman, Kenny Price, and John McKracken among others began working with materials which were uniquely evocative of those associated with the Los Angeles car and surf culture. Many of the objects had a unique, high gloss allure that engendered the term "Finish Fetish" to describe this nascent period in L.A.'s emerging contemporary art scene.

Some 50 years later, a fascination with materials and surface continues to define work as uniquely Southern Californian and drive a significant number of Los Angeles artists. This exhibition will examine artists from this era, but will focus on a younger generation of artists whose work is informed by, and a direct descendant of, this "Finish Fetish" sensibility. 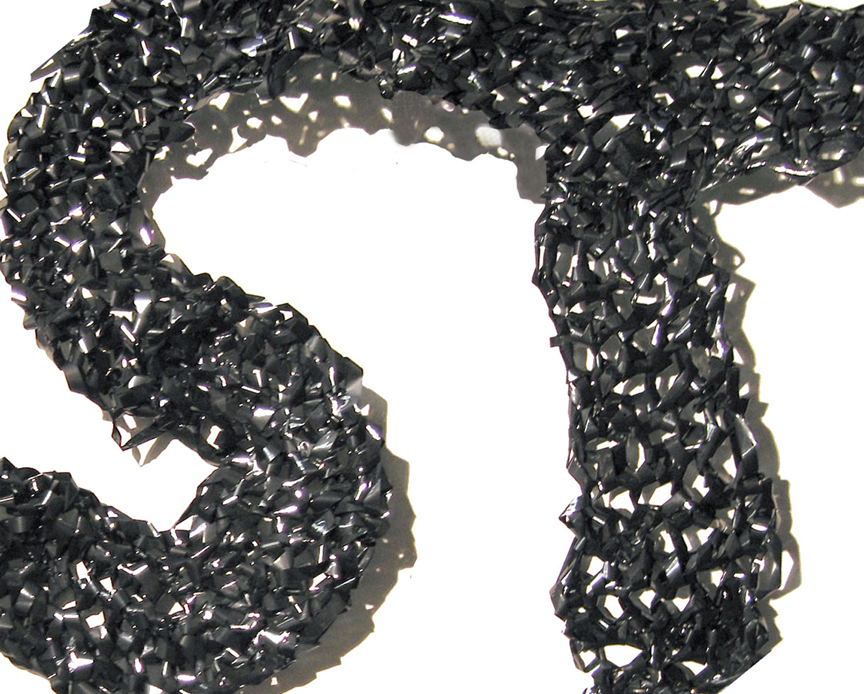 Transmit. | The visual focus of Transmit is at once the use of text, however, the six artists featured also draw attention to societal shifts in the various methods used for transmitting information, ideas, and images, exploring the nexus where art and words meet technology.

The informational landscape is changing with an increasing use of computerized devices, substituting the physical with digital-based replacements. Transmit gives a nostalgic nod to the hand-scripted, the published type, and the spoken word in traditional popular mass-produced media and machines. The exhibition also presents art in various media, which has been created as a result of the artists' assiduous handiwork. 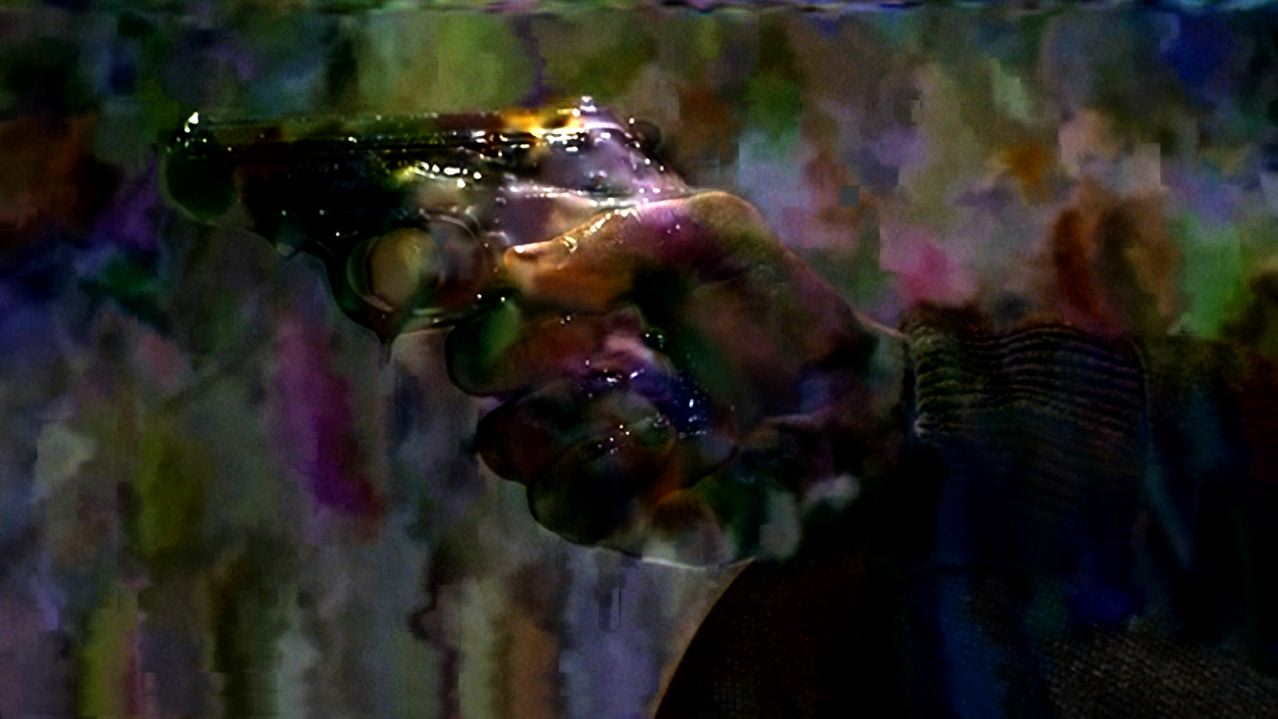 Nicolas Provost: Eight Film Works | "My field of interest is to question the phenomenon of cinema," says the artist. "My work is a reflection on the grammar of cinema and the relation between visual art and the cinematic experience. Foremost, I try to grasp our collective film memory and make poetry." Indeed, for much of his career Provost has been interested in breaking down and exploring various cinematic forms through his short-to-medium length works. In the process he has created an extraordinary body of work that ultimately remains critical of the medium, while at the same time offering a wide range of truly cinematic experiences--from the intensely psychological to the distanced and the expressive.