Having a child with special needs also feels jealous, sad, and a little bit cheated.

It means that you have a baby -- just like everybody else -- and your moods and your boobs are elated and deflated. You're overwhelmed and in awe. Just like every new mother. It also means that at some point, you realize that your child is different.

And because of that, so are you. 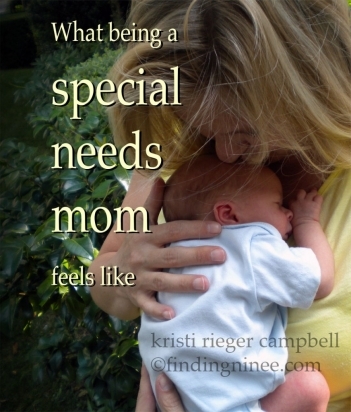 Having a child with special needs means that you'll spend days, months, and (sometimes) years pretending. Pretending that everything's fine. That he's "normal." You'll talk about delays, and pretend to feel relieved when family and friends tell you not to worry about them. You'll want so badly to believe that every baby develops at his own rate that you'll try. You'll try to believe. You may run with that for longer than makes sense because you don't know how to make sense of the fact that you know. You know something's wrong.

You'll have friends with children who are mere weeks apart from yours when it comes to biological age. When they're tiny, you won't see a lot of differences. You'll try not to focus on the small things and on the milestones. Your friends' kids will get older, as will yours. And, all of a sudden, you'll see more and more. You'll notice differences. You'll see your friends pretending not to see. Reassuring you that your son "will catch up," meaning well and trying to say the right thing. Again, you'll pretend to believe them.

You may waver between devouring every developmental milestone checklist that you're able to find and pounding the delete key on your laptop when one of the new baby emails enters your inbox with the subject line of "He's 18 months and is saying these words now!"

At some point, the lack of language brings you to professional evaluations. You'll receive devastating news from a doctor, from Early Intervention, from a therapist, from a school. They'll confirm that you were right. That your child is not typical.

And you will only refrain from falling to your knees because your son is watching you.

You'll realize that not only have you been reading the wrong parenting books -- you're in the wrong library.

You'll mourn for the baby you thought you'd have. You'll cry for the injustice of being dealt an unfair hand.

Finally, maybe, you'll understand that your baby is delayed. Is not "typical." And you'll do what you have to do. You'll seek therapy. All of it. You'll pay much too much for a few hours of social interaction therapy in a single week, knowing that it makes a difference.

You'll have met and fallen in love with your friends' children. Your nieces and nephews. You'll have spent years marveling at the precociousness and hilarity of young children and their incessant chatter.

You'll think about the child you might have had. You'll grieve for him, and feel awful for it.

At some point, you may shed bitter-hot tears over the fact that you miss this little person who was almost-fully formed, if only in your dreams.

One day, you'll realize that you're rarely grieving for that might-have-been son any longer. You'll forgive yourself and know that it's OK to grieve the child that you'd imagined raising. That little boy that you can almost-maybe-see, sometimes.

You'll reach a point where you want to come out to friends and family because you're lonely. And so you do. They say they're OK with it, but they don't really get it. A part of you doesn't want them to get it because you don't want their pity. More than anything else, you don't want pity. But you also understand that it's hard for them not to offer a bit of pity when it's a situation that actually warrants some.

In searching for answers, you look at your cards and realize that others are dealt a much more difficult hand. That some hands involve birthing babies fighting for their lives, who die, who were "incompatible with life," and you feel blessed.

You are blessed. Every mother is. Every parent is.

And then, you'll realize that maybe you're the lucky one. That having a 2-year-old call you fat makes for some funny blog material, but having a 4-year-old who still thinks you're the best person in the history of time is pretty perfect.

You'll see that although his language sucks compared to his peers', when you say, "You're my favorite person in the whole wide world!" and he pushes your face away with a silly grin, in his heart, he's saying, "I know, Mommy. And you are mine."

You'll see love that's bigger than you are.

Life will be different than you imagined.

But ya know what? It's going to be just fine.

Watch Kristi read this post at Listen to Your Mother":

You can also find Kristi on Finding Ninee and on her Facebook page.