"How would you feel if you ran across some of the kids who used to bully you at school?"

I usually tend to have an idea about why kids ask me whatever it is they ask me when I'm at their school talking with them about my YA book on bullying and anorexia.

Sometimes they ask because there's something they find hard to believe or, on the contrary, very easy to.

At other times, they ask because something I say sounds oddly close to their own experience. Or because they desperately want to help somebody whom they love and who they know is having a hard time.

Or they ask because they just want to provoke me or some other adult who is listening.

Or they ask because my bra strap is showing and some kid has already started laughing, in the way 12-year olds laugh in front of an exposed bra strap, and there's someone in the class who feels awkward when their classmates laugh with that kind of stuff (it's just a bra strap, for god's sake), and they feel the urge to ask something -- anything -- just to spare the whole class some embarrassment, really.

There was absolutely no bra strap showing that day, because it was cold in the classroom, so I hadn't even taken my coat off, and I had no idea why the boy at the back had posed that question. 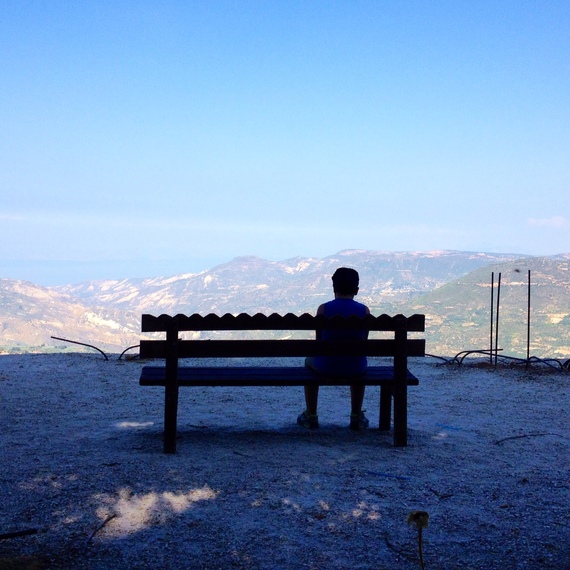 Maybe it should be easy for me to understand but I couldn't.

My mind had gone numb and suddenly I found myself -- I observed a part of myself -- a million years back, at another school, in another classroom. I was cold again and I reached for my coat because my new bra strap was showing, and I didn't even like wearing a bra. It felt too tight, but my mum said that I had to, because my breasts had grown, goddammit -- why should anybody's breasts feel the need to grow that much before they even become 10? Why should mine, anyway? -- so I reached for the damn coat, only to realize that I was already wearing it.

And there I was again, a million years later, in another classroom, where I was the one to be talking from the teacher's seat, holding a book with my name printed on it, while 20 children were staring at me, waiting for me to answer. "How would you feel if you ran across some of the kids who used to bully you at school?"

Now, I have vowed to always tell them the truth -- I don't know of any other way to talk to them -- so I did. I told them that my mind would go numb, exactly as it did the moment they asked me. I told them that I would feel my stomach clench and my whole body shrink, trying to get smaller --as small as humanly possible. Because my feet, as much as they wanted to run fast, knew that they couldn't run fast enough. They would run faster, as soon as the teacher got out of the classroom, and they would grab me again, and they would pick up the kicking and the punching and the pulling and banging my head against the wall, where they had left it the day before.

That's why I would try to become smaller -- as small as humanly possible -- and, from that place of maximum economy of size, I would try to hit them hard, as hard as my anger would allow. Because I was angry and my anger was so vast it could swallow everything, even though I can see now, a million years later (maybe I could see it then too, I don't know, because sometimes I was mature and full of understanding and at other times I just wanted to be left alone and not be hurt by anybody) that it wasn't me those kids were trying to hurt, it was their own demons, because, out of that classroom, they were hurting terribly too.

What would you do if they approached you?

They have sent me friend requests on Facebook -- the attacker usually sees as insignificant what the victim sees as pure trauma.

"What if you saw them on the street -- would you talk to them?"

"Would you ask them why they hurt you then?"

No, I already know the whys that matter.

"Would you like them to apologize for what they did to you?"

No, I would like them to take back the fear.

I would like them to find a way for me to relive my high school years, free from that uncontrollable urge to skip the last hour of class and disappear, every single day, because who knew whether they were going to get up again and pick up banging my head against that wall where they had left it all those years before?

I would like them to give me back the mornings when I was afraid to eat a proper breakfast because it might weigh me down and I might not be able to run fast, should I need to. Can an apology accomplish any of that?

In the first grade, there were two girls: one was tall and full to the brim with the wild joy that comes with proving that you are the best and the strongest. The other, faltering, became my first port of contact with the huge class of people who don't feel like bullies at all, they just feel too terrified or plain needy to stand up to the ones who do.

They would take my glasses off in between classes and they would threaten to smash them -- so what, you'd say, but there it was again, that clenching feeling, the fear that makes your legs buckle and wish you were a nobody, nowhere.

And then everything gets a bit fuzzy: six years of elementary school all woven into an ugly mess of violent cornering during recess times, name-calling ("you leper/slut/huss"), banging my head against walls, kicking me when nobody was looking, of me fearing that if I spoke up things would get worse and if I didn't, they would simply remain the same.

The kids ask me what it was that made me into a victim and then I ask them why would anybody feel such an overwhelming need to hurt others.

Their answer: violence breeds violence and when somebody feels helpless they usually try to find a way to feel in control again. I feel thankful for their maturity and their perceptiveness too.

My answer: it was probably because of my psoriasis (even my friends would sometimes refuse to take my hand in theirs) and premature puberty (I had to wear a pad and a bra before I even learned how to solve second-degree equations). And because I was unusually good in class and unusually introverted out of it, I'm afraid I don't have the necessary knowledge or self awareness to explain to them what bullying victims are really made of. I can only encourage them to try and find what is precious within what is different.

They ask me what bullying has to do with anorexia and I find that I need months before I can come up with a decent answer.

For me, many years after the bullying had stopped, anorexia became a new way to get smaller, quieter, less intimidating, non-existent, so that my life would be less risky -- or, at least, less painful. I didn't become anorexic because of the bullying, but anorexia has indeed been for me some kind of self (destructive) defense against the abuse.

And here's the thing: if you feel that you can't really control many things in your life, you will definitely try to find some thing that you can. What you are going to choose depends on who you have learned to be while growing up and on how your parents used to control their uncontrollable life. And you may try to control others or your own self but you will always do so through the most basic of urges: pain and survival. Through attack or deprivation. And that's while you are still just a kid.

Journalist, writer and co-founder of Women On Top mentoring network