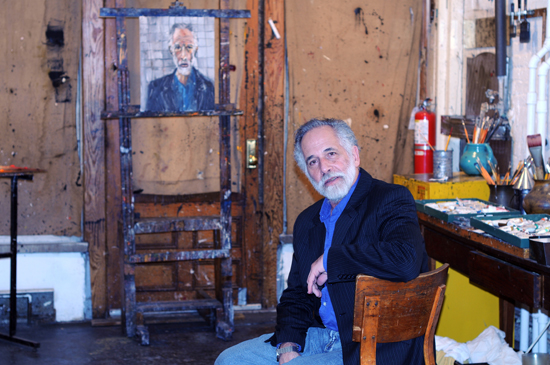 I was introduced to Ira Sadoff at a dinner after a reading by a mutual friend, the poet Gerald Stern. I came to the reading to get a better sense of Gerry for the portrait I was going to paint of him. Gerry said to me "after you paint me you should paint Ira, he is a fine poet." That's how my series of poets got pushed alone by the generosity and friendship of one great poet towards another. I started reading Ira Sadoff's poetry before he came to my studio. I had a good sense of him because he is very open and straight forward. Sadoff has characterized himself as "one poet among a decreasing minority who is trying to resist the return to formalism, the sterile, conservative, aesthete academicism of the nineteen-fifties."

I identified with him immediately. I see my paintings as straight forward also, resisting a return to formalism, sterile, conservative, aesthete academicism of some contemporary art. Poetry meant a lot to me over the years while I was working in a non-verbal medium. I read poetry because a poem allows full concentration for a short while and then it releases you back to your own art. Also, by immersing yourself into someone's deepest most compact and private thoughts, you escape yourself. It provides me with the opportunity to have a dialogue with another artist. In the case of Ira, I admire his work and voice, and we discovered we had a lot in common. Painting Ira was a dialog, and afterwards, when I took a photo of him looking back at me beside the painting, I felt I ought to ask him what it was like to be painted. His answer is below. Thank you Ira! 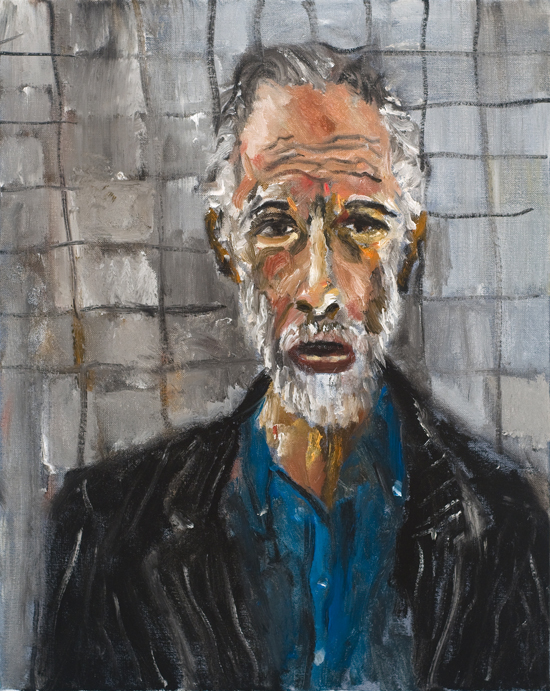 Ira Sadoff on being painted by Michael Hafftka:

How do you get to know someone well enough to paint them? Surely a painter with a good eye can read the way a person's formality or informality reflects in his body language; he or she can tell what's written on a face in its scars and silences. Judging by the paintings of Michael's I'd seen before I agreed to be painted: he had that eye. At first I thought of him as a kind of minimalist (A few gestures said a lot), but then there was something Bacon, something a little twisted about some of the faces and that interested me.

Before we set up a date for the portrait we'd met only once. We sat across from each other at a very long restaurant table after a poetry reading and exchanged only a very few sentences. So it was something of a surprise how at ease Michael made me feel the afternoon I visited his Brooklyn studio (the borough where I was born). We shared a love of jazz -- I was impressed that he knew and had played with Jemeel Moondoc --, we came from similar working class and lower-middle class backgrounds, we were both ironic urban Jews who'd learned early how to defend ourselves and fend for ourselves. We took different paths as artists, but we were both fiercely independent, undiplomatic and primarily self-taught. We spent a lot of time discussing our troubled family histories. Michael's loomed larger, his family had been touched by the Holocaust; in our past we had both survived complicated marriages and relationships with children and stepchildren.

I sat on a chair, asked Michael several times if my talking distracted him from the painting, but he said he liked to work quickly and enjoyed the talk. I liked it too: it was funny, intimate, casual and for reasons I can't fully explain, we were both relatively undefended. Three or four hours later the work was done. Nothing I'd seen of Michael's before could have prepared me for my portrait: he saw something melancholy, but more something tortured and wounded in me, something fierce; he saw something probing in my expression.

It's an odd experience to see how someone sees you. Even more so someone you don't know very well. But there's a way in which the painting wasn't about me. I was its subject, the way a landscape was a subject, and it's the artist's job to create a vision, something coherent and artful in what he saw. And I was glad to be there for it, to be part of the pantheon of poets Michael painted. When they appear in a show sometime in the future, I'll hold a drink up to him with praise and thanks.