Like many women, I saw the two pink lines on the pregnancy test and felt an array of emotions. Shock, fear, panic, a bit of underlying happiness -- but mostly fear. In my last pregnancy I suffered from Hyperemesis Gravidarum (HG), a severe and debilitating disease often described as acute morning sickness. For five days after I took that pregnancy test, I felt like a ticking bomb waiting to go off. I was terrified. Then, on the evening before Thanksgiving, just after returning home from my first doctor's appointment where we had a sonogram with a tiny fluttering heartbeat, it happened. I threw up. I knew it was the beginning.

Less than a week after Thanksgiving, I ate the last meal I have eaten up to this point. I was seven weeks pregnant. Three days later, I was hospitalized for 11 days. During my hospital stay I was given IV fluids and several of the medications most frequently prescribed for HG -- Zofran and Reglan -- through my IV. One day after several nurses attempted eight times to put in a new IV, the doctors decided to give me a PICC line, essentially a permanent IV in my upper arm, since it was obvious I would need long-term IV hydration and medication.

Although I was still unable to eat more than a few bites of food at a time, and only occasionally would they stay down, I was discharged. Now at home I receive home health care where a nurse visits several times a week to check on me and change the dressing on my PICC line. I am also on a pump that gives me a continuous flow of Zofran through a subcutaneous needle inserted in my stomach. Because I have a strong needle phobia, my husband has to stab me with the needle every other day, as well as administer the different bags of medicine and fluids because I am too weak to change them myself.

I have two daughters, ages 4 and 19 months. HG has taken me from them, although they do not understand why. Mommy lies in bed all day and cannot play with them. I can barely muster up energy to read a book before bed with each of them, although I try to do at least that to stay close to them. My husband has been a saint, adding to his already busy schedule of work and parenting. He has become essentially their sole parent the past six weeks, with the help of his mother and mine, who have come to stay and be with their granddaughters and help nurse me. The girls are doing well enough; my little one is too young to understand what is going on, and now calls out for "Daddy" instead of me when she wakes in the night or needs something, which breaks my heart a little bit, but also makes me glad she has a strong relationship with him. My 4-year-old has been acting out a bit; she knows I am sick and why, but it doesn't make it any easier. We have a book called Mama Has Hyperemesis Gravidarum (But Only for a While), which explains the condition in a child-friendly way, and I think it has helped a great deal.

One of the worst things about HG is how isolating it is. I cannot go out, cannot even talk on the phone for a long time because it makes me feel sick. I cannot cook, everything smells terrible to me, and even walking to the bathroom makes me vomit most days. I also have ptyalism, which is hyper-salivation, and swallowing it makes me vomit too, so I am constantly spitting into a cup. I feel disgusting.

I have found a wonderful community of HG sufferers and survivors online that provides the comfort and wisdom of other women going through the same things. I mostly lie in bed, watch movies or TV shows on my computer (when the noise and movement don't increase the nausea), and I cry and sleep a lot. The only time I'm not nauseated is when I am asleep, although sadly I am also experiencing insomnia. My friends have been kind, checking in to see how I am every few days, but it still makes for a lonely existence. I miss being able to take my kids out, go grocery shopping, even clean our apartment!

I am fortunate that I have a flexible job where I am my own boss and work from home. I am trying to stay on top of my job, but like everything it has been slipping. During my last pregnancy I was still working out of the house part-time, and ended up having to leave my job at the end of my first trimester because I simply could not do it anymore. In that pregnancy I started to feel better around 18 weeks, and for the second half of my pregnancy I was able to enjoy being pregnant, but it took until after my daughter was born for me to realize that my "new normal" was a very skewed version of true normal. I could not eat meat, handle many smells or drink water for the entirety of my pregnancy. I'm hoping I can get to a relative level of "normal" sometime soon in this pregnancy. I am now nearly 13 weeks pregnant.

I am more fortunate than many women afflicted with HG. I have a supportive husband and family, and flexible job situation. We can afford additional child care and have decent health insurance that covers most of my medical care. I was saddened to learn that at least 10 percent of women suffering from HG turn to termination because they are so miserable and unable to handle the disease, or they do not receive adequate medical care. Many obstetricians are unfamiliar with HG, so they often classify it as a "mental condition" and women are told they just need to "get over it," or that they must not want their babies. This is simply not true -- HG is a physiological disease, one that must be treated aggressively and compassionately.

Unfortunately, there is no known cause of HG, and no proven cure. For many women the variety of medications only help take the edge off the worst of the symptoms -- and some women with severe HG are hospitalized for the entirety of their pregnancies. HG takes a mental toll, but it is not a mental illness. Trust me, no one wants to feel as miserable as this, especially not during what should be one of the most joyous times of life. I am a survivor and my children are too, and while HG is robbing me of life right now, I know in the end we will come out strong.

Update: On July 22, I gave birth to my beautiful son, who at 9 pounds 11 ounces was by far my largest baby. My OB described him as the world's most effective parasite, given how large hew grew despite my inability to eat for months. My illness lasted severely until I was 22 weeks pregnant. After that point I started getting gradually better; I was able to have the PICC line removed and eventually go off all medication in the last weeks of my third trimester. I even had a few moments of enjoying being pregnant and feeling mostly "normal." My daughters got their mommy back and are now ecstatic big sisters to their baby brother. I am one of the lucky ones whose HG got better in the middle of my pregnancy. Far too many sufferers are severely ill until they give birth. When I heard that the Duchess of Cambridge is expecting again and suffering from HG, I wanted to share my story in the hope of bringing more awareness to this miserable condition. I hope she recovers quickly and is able to have a good pregnancy despite the intense media scrutiny, which is the last thing a seriously ill woman needs to be dealing with. HG is NOT just "bad morning sickness." I am thrilled to have three beautiful, healthy children, and I hope other women suffering from hyperemesis can be as lucky. 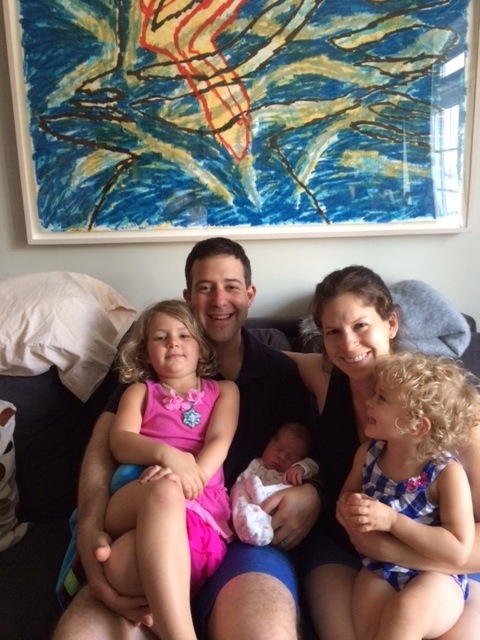 For more information on Hyperemesis Gravidarum, visit www.helpher.org and beyondmorningsickness.com.