Richard Ben Cramer's book about the 1988 presidential campaign -- What It Takes -- was a classic about the psychology and talents required to climb the greasy pole. Time to update it in this political year.

During our greatest crises, fortunately, Washington, Lincoln, and FDR all knew themselves and their times. In the modern era, political genius is rare but usually easy to spot. Harvard and Yale law school classmates of both Barack Obama and Bill Clinton would nudge each other and say, "That guy's gonna be president someday."

But for mere mortals, politics has become what Thomas Jefferson feared -- a business. That's the conclusion of Alan Ehrenhalt's 1991 book, The United States of Ambition, which described a brutal Darwinian process which requires, in Liam Neeson's signature line in Taken, "a very particular set of skills."

Whatever the motives -- power, service, money -- there are still right and wrong ways to do it. So for all those thinking about entering the fray, below are seven valuable skills in 2016 that still can make the difference between first and Palookaville.

1. Have Relentless Drive and Focus. "What it takes" is a level of immersion seen in Jiro Dreams of Sushi and Whiplash. It's LBJ whose cousin said of him, "Days meant nothing, nights meant nothing, weekdays, weekends, they meant nothing. He could not stand to lose, just couldn't stand it. "It's Ted Williams swinging hundreds of thousands of times in front of mirrors until it becomes as natural as breathing. "The way the inevitable came to pass," said Justice Holmes, "was effort."

The essential golf skill, according to a popular book, is "Take. Dead. Aim." Which is why John Kennedy chose Lyndon Johnson for VP. His brother and key labor supporters opposed LBJ because he was no liberal and said that JFK's father was a "Nazi sympathizer." But none of that mattered once Kennedy realized that the choice increased the chance of winning Texas electors and therefore the presidency.

Last, a relentless drive means being insatiable. It's Chuck Schumer continuing his local Sunday press conference habit even as he conquers the national Senate and Bill Buckley knocking off his twenty-fourth book while on a two-week boating trip. As was said of the anti-hero trader in Showtime's Billions, such individuals "are more like a nation-state than a person."

2. Always Optimistic / Never Defensive. What Teddy Roosevelt, Woodrow Wilson, Franklin Roosevelt, Ronald Reagan, Bill Clinton and Barack Obama had in common was a molther who let them know they were beyond the moon and had to reach for the stars. A deep belief in yourself is a political essential because every candidacy is daily poised between a triumph and an embarrassment and no one's a prohibitive favorite in his/her first race. Fifty reporters covering the 1948 presidential campaign were asked that summer whether Truman could win -- not one thought so.

The late, irrepressible Lee Atwater memorably explained the best approach when you appear to be slipping: "Attack, attack, attack.. if you're explaining, you're losing." The trick is how to turn an apparent defeat into a Dunkirk, even a win. Stories about a slush fund jeopardized Nixon's place on the ticket in 1952 until he figured out the right tone, images, and words in his Checkers Speech -- end of story.

3. Maintain Flawless Discipline. When his wife loses her temper publicly on House of Cards, the venially brilliant Frank Underwood lectures her that "courage is knowing when to shut up because the stakes are so high." In public life, you're only as strong as your worst gaffe, your stupidest mistake that can be incessantly advertised so a voter can't think of you without thinking of it.

"The clearest discoveries of virtue or vice in men" comes not from their great exploits, wrote Plutarch, the great Greek historian. "Sometimes a matter of less moment, an expression of a jest, informs us better." Especially in our era of cell phone videographers, voters are attentive to that betraying moment -- George Allen's "macaca" and Mitt Romney's "47 percent" come to mind.

To order or learn more about Green's book, go to BrightInfiniteFuture.net. 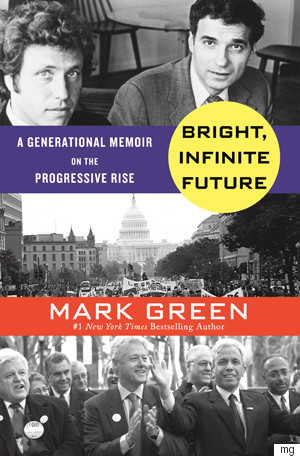 4. Find Your Voice. "A rendezvous with destiny" ... ""I have a dream" ... "Mr. Gorbachev, tear down this wall." There's no formula to predict what precise sequence of words will move audiences, but certainly the ability to draw vivid word images can promote political success. At the risk of oversimplification, there are three keys to language that soars and connects. It has to fit the occasion, be fresh, and convey an image or story that endures. King could have said at the Lincoln Memorial, "I have an agenda" and Reagan at the Brandenburg Gate, "This wall divides us." But who'd remember that?

5. Stay Calm. Calm was when John Kennedy and Lyndon Johnson revealed not a trace of anxiety to observers when, respectively, a) he received the news in October 1962 that the Russian freighters carrying nuclear missiles to Cuba had turned back and b) LBJ oversaw the transition of government from Parkland Hospital and Air Force One on November 22, 1963.
People want to know that a principal can concentrate on results because, according to New York Mets manager Terry Collins, "When the manager panics, everyone panics." On most days, a candidate will hear both terrific news and awful news that would clobber most people -- or would lead a rational candidate to believe either that s/he can't lose or can't win . . . when in fact neither is almost ever true.

6. A High EQ. One needn't be the smartest person in the room to succeed in politics, only "smart enough," as the often ridiculed Eisenhower and Reagan surely were. Far more urgent than a big bandwidth is a superior EQ -- for emotional quotient -- the intuition of being able to interpret signals from your immediate environment. It is as easy to imagine playing tennis blindfolded as to believe a person can survive public life without being able to successfully read people and situations. The best description of this kind of intelligence comes from the young John Maynard Keynes, observing British prime minister Henry Lloyd George at the Versailles Conference in 1919: "To see [him] watching the company, with six or seven senses not available to ordinary men, judging character, motive, and subconscious impulse, and compounding with telepathic instinct the argument or appeal best suited to the vanity, weakness, or self-interest of his immediate audience" was to feel sympathy for the high IQ Woodrow Wilson.

7. Balance Egotism and Empathy. While a strong ego is necessary to survive the political gauntlet, if it's too large then a person can plunge over the cliff into narcissism if not solipsism, a place where others exist only for your enhancement. And extreme self-absorption is inconsistent with the public good or maintaining public support. According to Craig Malkin, author of a book on the subject, they key is "to love yourself but not too much." An example of the right balance was FDR post-polio; an example of a severe imbalance is Donald Trump.

So, you up for either the greatest show on earth with the risk of concession speeches in front of your weeping family ...or satisfied to go into the family business and wonder what might have been?

Mark Green, the first Public Advocate of N.Y.C., is author of the forthcoming Bright, Infinite Future: A Generational Memoir on the Progressive Rise (May, St. Martin's Press).