Despite tremendous progress in poverty reduction over the last two decades, poverty still persists. Along with South Asia, Africa is a region where large numbers of people continue to live in extreme poverty. It is also a region where there is clearly room for higher foreign trade levels (see Chart). Given that trade can generate growth - and thus poverty reduction - focus on trade-related reforms (e.g. lower tariffs, better logistics, and trade facilitation) deserves to be a high priority of the region. 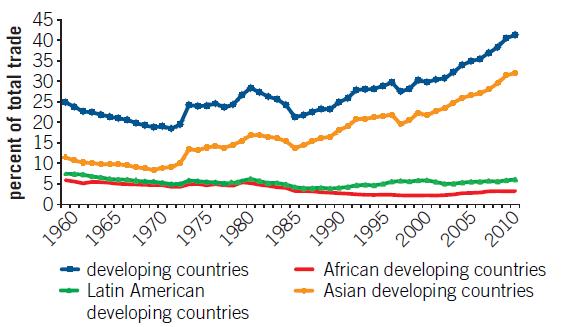 There are particularly untapped gains from Africa trading within itself. African countries are currently losing out on billions of dollars in potential trade earnings every year because of high trade barriers with its neighbors. As stated out in the De-fragmenting Africa report, it is easier for Africa to trade with the rest of the world than with itself.

Trade can lift people out of extreme poverty in several ways. Besides immediate gains from de-fragmenting through regional integration, consider that the relatively abundant unskilled labor force may benefit from higher demand if countries can leverage a comparative advantage in producing labor intensive goods. Freer trade can also enhance the incentives for investment, provide economies of scale, enhance competition in detriment of rent-seeking activities created by trade restrictions, and open the way for technology transfer from abroad.

Notice that I said "trade can reduce poverty". As Maelan Le Goff and Raju Jan Singh noted in a recent Economic Premise - Can Trade Reduce Poverty in Africa? - most analysts recognize that, in the long run, open economies exhibit a better performance overall than closed ones, with development benefitting from relatively open policies. Nonetheless, they highlight, "for comparative advantage to increase the incomes of unskilled workers, workers need to be able to move out of shrinking sectors and into expanding ones". If there are too many barriers to labor mobility and the entry and exit for firms, the potential for poverty-reducing impacts of trade may remain untapped.

Another challenge to consider is when the demand for labor generated by trade does not match the local availability of unskilled labor and production processes turn to more skilled labor and imported equipments. This can create dualistic structures in the local economy. Natural-resource abundance may also tilt local comparative advantages toward non-labor intensive sectors.

The authors see a way forward: highlighting the need of complementary reforms to allow a bigger poverty-reduction bang from the trade buck. They report results from a research with 30 African countries showing how deepening local financial sectors, raising education levels, and strengthening governance facilitate the reallocation of resources from less productive sectors to more productive ones - the essence of the transition of an economy from low- to middle-income levels:

"A more developed financial sector, as measured by the private sector credit-to-GDP ratio, allows banks and investors to quickly identify new and promising sectors and to redirect credit. A more educated population, as measured by primary completion rates, would be more able to acquire the new skills sought by growing sectors and adjust more rapidly to the new conditions of the labor market. Finally, better governance, as measured by the rule of law, would facilitate the entering into and dissolution of contracts and make conflict resolution easier."

Their research also finds that many African countries already meet the thresholds of financial deepening and levels of education above which the impacts of trade tend to be positive, while institutional strengthening has relatively more room to grow. Special attention should be given to countries currently below those thresholds. After all, adequate policies and institutions, human capital, and a financial system capable of transferring resources are in themselves favorable to poverty-reduction efforts in Africa and elsewhere, and gains from trade are just one of the factors.

Follow the latest from Otaviano Canuto at twitter.com/OCanuto and keep up with the World Bank's efforts to help countries fight poverty and close gaps in income and opportunity at twitter.com/WBPoverty. For more Economic Premise notes, go to worldbank.org/economicpremise.