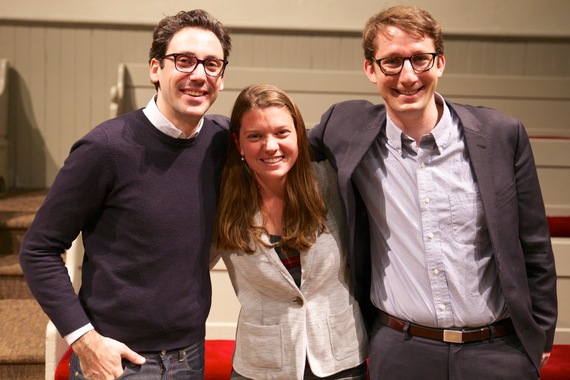 See yourself in the "other"

After top student Maggie Doyne graduated from high school in New Jersey, she set off on a "gap year" to travel the world. She arrived in Nepal as the country's civil war was ending and witnessed the destruction firsthand. Schools were closed, temples were burned, and hundreds of thousands of children were uprooted from their homes.

After trekking for three days into a remote Himalayan village, Maggie came face to face with an orphaned child who was working as a porter, carrying over 150 pounds of weight on her back.

"We locked eyes, and at that moment I felt that she was me and that we were the same exact person. It was surreal. I remember myself at her age, on the soccer field, going to my first dance and studying for my tests. But this was her reality. The stark contrast of the difference of our lives -- yet being like the same person -- it really hit me then that I had to do something."

Eight years later, Maggie is the legal guardian of forty-four children. Through grassroots fundraising -- and the money she earned from babysitting back home -- Maggie built the Kopila Valley Children's Home and School, which educates over 350 boys and girls. Kopila Valley is the only school in Nepal without a corporal punishment policy. "Our goal is to create a model that the government can adapt," she says.

Maggie has been featured on the cover of the New York Times magazine and won $100,000 for her continued work from the nonprofit DoSomething.

"It's the most addicting job in the entire world," she says.

Don't immediately assume that you have the answers

Oliver Rothschild's first job out of medical school was training local health workers to assist HIV patients door to door in Rwanda. One day he listened as a community health worker responsible for a remote area talked about his job. The man walked 10 miles each day to visit patients, successfully ensuring that they took their medications in a timely manner. The health worker recounted the most difficult part of his day-to-day work:

"His biggest challenge, he said, was carrying a bag of rocks with him up and down hills. We sat back, a little blown away. We told him 'We don't want to tell you how to do your job, but you don't actually have to carry a heavy bag of rocks with you.' He smirked at us and said, 'If you know a better way to keep away hyenas, I'd love to hear it."

With a new sense of humility, Oliver realized that pre-packaged "answers" don't always work. His next venture after community health was examining the education system in Rwanda. During visits to schools, he observed that teachers were relying almost exclusively on rote memorization and drills. As a result, students were not developing adequate critical thinking skills necessary for employment in a modern economy.

Oliver began to carefully test a new style of higher education with the local community. He initiated a program called Kepler to make available free on-line classes, known as Massive Open Online Courses or MOOCs, from some of the top universities in the world.

But, by listening carefully to the community's needs, he knew that technology wasn't going to be enough. Kepler now offers these on-line tools with a twist: Rwandan students live together in wired group houses, meet for in-person seminars and receive intensive career counseling. They graduate with specialties in business management and finance, computer science, and engineering.

In Africa, where only five percent of the population is able to afford a college education, Kepler is now offering one for $1,000 per year. Oliver has plans to open a second program in Nairobi, eventually spreading across Africa and other regions of the world.

It's been over seven hundred years since the invention of eyeglasses, yet nearly one billion people worldwide still need them. In practical terms 15 percent of the global population cannot effectively work or learn because of this lack of access.

Although Peace Week speaker Neil Blumenthal spent five years working in the nonprofit sector on vision care worldwide, it wasn't until his friend lost a pair of glasses in the seat pocket of an airplane that a light bulb went off for Neil and his business school friends.

"We were standing in a computer lab between classes, asking Dave why he didn't just buy another pair. He said, 'They're expensive.' And I said, 'They really don't cost that much to manufacture.' Andy said, 'Why doesn't somebody sell them online?' We had to run off to class, but at 2:30am I sent out an email to Jeff, Dave and Andy saying, 'Wow, we had a really interesting discussion.' At 2:35am they all responded."

Warby Parker (the name was inspired by two Jack Kerouac characters) was born from that exchange. By selling glasses directly to consumers through their website, they have managed to circumvent the traditional brick and mortar stores owned by a few large companies that had kept prices for eye-wear artificially high. Warby Parker glasses start at $95.

Warby Parker is a B Corporation, an official certification for private enterprises committed to focusing not only on profit, but also on rigorous social and environmental performance.

Warby Parker has teamed with Neil's former nonprofit employer VisionSpring to ensure that for each pair of glasses they sell, a pair is distributed to someone in need. Over 500,000 pairs have been donated in 36 countries from Afghanistan to Sierra Leone to Costa Rica.