What do the most successful people have in common?

What is the force that drives excellence?

In Michael Wardian's case, what did he possess that allowed him to attempt an impossible world record, not once but twice, in under 36 hours? 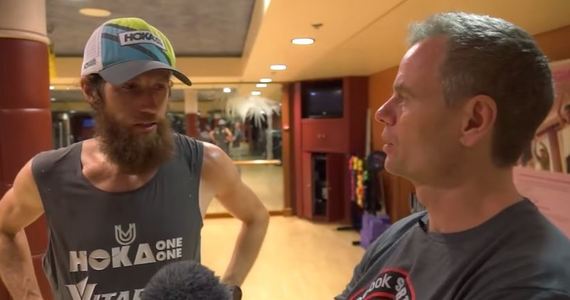 Being an accomplished ultramarathon runner, Mike's goal of running the fastest 50K on a treadmill became an obsession. His story -- one for the record books (literally) -- began with a Spartan Race and ended with a world record.

Mike was on the Spartan Race cruise to Great Stirrup Cay to compete in a race and vacation with his family. He ran the course, then ran the perimeter of the gorgeous island, and then he had the urge to keep on running. After hearing about a woman who set a 50k treadmill world record, Mike decided to go after the men's record. When I got word of the idea, I suggested we meet in the gym at 7 p.m. Mike, without hesitation, was in.

That night Mike stepped on the treadmill in front of a large group of Spartans, including myself, and finished the 50k in 3:06:24, earning a place in the record books. Well, that's what he thought until 2:04 a.m. when he saw a tweet from London that read: "Awesome effort as always! We have a 3:05:37 over here..."

"I was so mad at myself...I could have beaten it. I just didn't know," Mike recalled. He missed it by 53 seconds. "I knew I could do it. I had to try it again," he told me when I saw him in the morning.

I thought I'd take it one step further and suggested that he run it at 3 a.m. Again, Mike was in.

Early the next morning, Mike stepped onto the treadmill in front of a smaller crowd to finish in 3:03:56 seconds, finally earning his world record spot.

"A few times I thought it was going to let the record slip away again, but I did it with the help of all the Spartans on the cruise - it was the the Spartan spirit," Mike said afterwards.

The example Mike set here is crucial to success. If you can do something, you damn well should.

Most people are afraid of failure and don't use the fear as a driving force to accomplish something great. I asked Mike if failure scares him.

"Definitely. Every time I step to the line, I don't know what's gonna happen. Uncertainty. That's what drives me."

So, what do the most successful people have in common?

Uncertainty often makes us hesitant, but when used as motivation, it can produce the most outstanding results. The most successful people I've come across have mental discipline, they harness uncertainty and embrace the possibility of failure.

The body thrives on discipline, and by pushing ourselves to extreme limits we develop the mental toughness necessary for success. As Mike has shown, a lifetime of success far outweighs temporary discomfort.

Mike concluded, "Stay after it. Always stay after it. Before I race I think to myself: 'Why not me? Why not today?'"

Only once you stop holding yourself back can you ask yourself: "What will I accomplish today?"

Spartan Up! The Podcast can be found at www.spartanuppodcast.com, on iTunes, Stitcher, and YouTube.

To find a Spartan Race in your area, visit: www.spartan.com.