I'll admit it. When the Steve Grand video "All American Boy" dropped in 2013 with the tagline "first openly gay country artist," my teeth clenched. I had been working on unveiling my band Indiana Queen as the first openly gay country band for months. I felt like I had shown up at the dance wearing the same dress as Steve Grand, but he got there first. And looked hotter. Damnit.

That was just two years ago. At the time an openly gay country artist was unheard of, I'd been at it for a while, and in 2013 I thought maybe I was the only one. In the following months, country superstars came out, country superstars sang pro-gay anthems, and just now I got phone call asking to cast me and my partner (PS we just got engaged) in a major CMT video that shoots next week. New Nashville is about to be New Gay Nashville.

Last week GLAAD teamed with Ty Herndon for a new annual event during CMA week. The first "Concert for Love and Acceptance" was packed. Ty got choked up at the feeling of support in the room. Crystal Gayle sang "Don't It Make My Brown Eyes Blue." Tiffany thought we were alone now. Basically, it was badass. 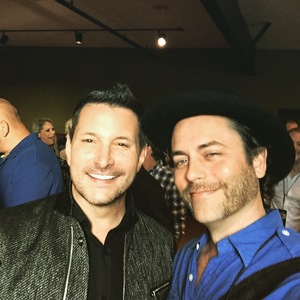 As if it couldn't get any gayer, Kacey Musgraves just held a record release party for her new album "Pageant Material" at a local gay bar and had the drag queens lip sync the entire album! Kacey says, "I've had a lot of people come up to me and say that they can walk a little bit taller because they're a big country music fan and now they have something that really resonates with what they're going through. I see gay couples at my shows and they feel like they can be themselves, like, holding each other and singing, and that just makes me feel really good. I really am proud of that," in an interview with ABC News Radio.

Watch the adorable Musgraves at her record release party in Nashville and a music video featuring myself and newly engaged BF below:

With You (Uncensored Version) from Kevin thornton on Vimeo.