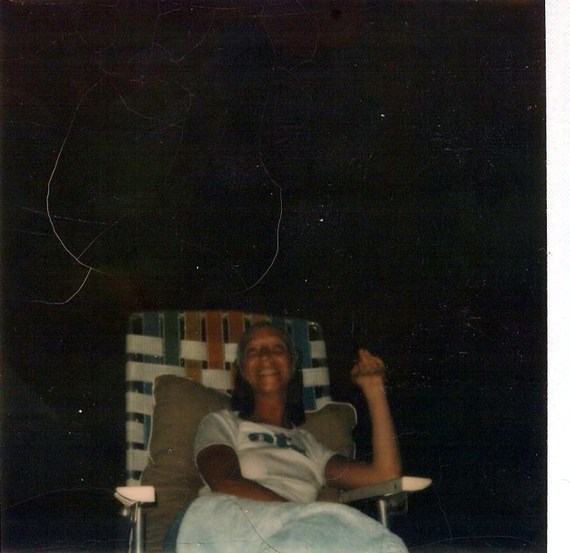 Death is kind of like a bad break-up. There's a lot of ugly crying, fetal position dry heaves, binge drinking and subsequent after-hours spent reaching for the phone. The only difference is that, this time, there's no chance of reconcile in the corner of a crowded bar three Cuervo shots/cries for help deep. There's no 4 a.m. call to say "I miss you" or late-night text turning words like "I still love you" into "I stilk loke tou." (You want to wish they hadn't sent it but really you're just glad there's something in writing that says you aren't the only one riding front-car of this emotional roller coaster.)

There's no "one more chance" or "last goodbye." Goodbye was goodbye and it's actually forever (not just early episodes of One Tree Hill "forever"). The dead can't come back like Hayley does for Nathan, and they certainly won't pick up the phone when you ass-dial them at the bottom of a bottle on a Friday night.

It was Friday the 13th (go figure) and I was one whole White Zin wine-product in at a Christmas party as I caught a glimpse of what should've been my lock screen (once a photo of Jessica Lange, now a shot of my mom riding a bike on a Bermuda beach in 1975). What I saw instead was "Mom" and the seconds ticking slowly.

I ended the call, finished the rest of my "wine" in one sip and slipped into a spiraling panic that prompted stress hives and a refill. I fled from a room full of friends decorating a Christmas tree to "All Star" by Smash Mouth and threw my phone on the kitchen table under loaves of bread and behind a box of beer. I stared at it for what felt like an hour but was probably just seconds and poured myself another glass of Rite Aid brand wine-product.

I took a deep breath and resumed position, hanging one of what had to be a dozen penguin-themed ornaments belonging to the family of the friend whose house we were decorating. A collection of both his mother and his dead stepdad. They both really loved penguins.

There's a quiet comfort in those friends who share a similar loss. It's like getting broken up with the same week as your best friend, both of you left for dead and drastic weight gain. It's not often spoken about but it's assumed and understood. You develop a special Lassie-like sense that tingles whenever the other needs a hand packing up their house, a hard hug or a stiff drink (Everclear, please). You go to them first and they're the last ones standing by your side, no matter how many mid-afternoon margaritas you've both downed. They don't waste their breath with 10 too many "you'll be okay"s because they've been there and they know right now you're not.

Just like when the walls of what you consider "can't sleep, can't eat, reality over dreams" love come tumbling down, death comes crashing in like an eerily similar heartbreak, only it's on steroids and a power trip. It's a jackhammer and your heart's roped off for construction.

This wasn't the first time I'd been emotionally triggered to the point of panic.

Like in the days, weeks and months following a brutal break up, the weirdest things remind you of a person you've lost -- things you never thought twice about when they were still here. A stoop you shared a kiss on. A bus stop you waited at together. A bar you got free buy-backs in. The air.

My first-ever breakup left me with a crippling fear of the sound of skateboards, the second with a year-long disdain for Brand New (thank God that strike is over). The third left me with an eerie sadness during the movie Elf, a six-month hatred for bagpipes and an unhealthy urge to kill off his character in our shared Sims game (I held back for the sake of our two kids and the three-story glass house we built together).

The world moves on around you but you're stuck in between a rock and a fucking boulder and everything feels bigger than you. You'll never feel more alone than at the bad end of a breakup or front row at a funeral. (Maybe at the bottom of a box of Franzia while watching Blue Valentine. It's a close second.)

When my father died, I couldn't listen to Shillelagh Law, eat KFC or even catch a glimpse of golf. I'm still learning what sights and sounds hurt most since mom passed, oftentimes leading to a gruesome display of public depression. To anyone who's ever seen (or been) that girl sobbing on the sidewalk, mascara running down her face faster than she can wipe her nose on her North Face: you know damn well that those displays are even worse than any public display of affection.

Almost three months in and I'm emotionally triggered by Five Guys Burgers and Fries, all 100 seasons of Survivor and the chicken teriyaki Subway sandwich. It's the last meal she ever asked me to bring her and Siri couldn't even find the Subway that was six blocks away from her high-rise New York City hospital. Instead, I brought her a some shitty wrap that someone down the hall stole out of their communal fridge before she could even eat it.

I'm also partial to a travel-sized hotel lotion sample sitting on my desk at work. Bath and Body Works' Rain-kissed Leaves (it was a Hilton, and we could barely afford it). We pocketed two and some conditioner after a family wedding we both got white-girl-wasted at. It was the first and last wedding we'd attend together and actually enjoy. The half-ounce bottle reminds me she won't be at my own.

I'm emotionally triggered by Coors Light, Sister Act (one and two), "Amazing Grace" (bye again, bagpipes) and Google Maps because the satellite image of our South Brooklyn block includes a shot of her pushing a shopping cart and wearing an Iona College Rugby shirt.

"Does your daughter date a rugby player?," asked everyone, always. "No." "Does she date anyone?" "No."

Most of all, I'm emotionally triggered by any walk more than 10 blocks long. It took us 22 years to get where we were when she died. I'd finally shaken off the years of teen angst and general cuntiness, stopped blaming her for what wasn't her fault and reserved coming home blackout for just Thanksgiving Eve. I called because I wanted to, almost every long walk I made, and missed her when she wasn't around.

We fought until she died. About boys. About boobs. About how to spell the word "about" and about her going to the hospital because, come hell or high water and cancer aside, we were just like any other 20-something daughter/50-something mother combo.

Every now and then I reach to call her and, when I don't, my ass does it for me.

Just like moving on from an ex that called it quits, these soft spots grow fonder over time. The skin around the wound grows thicker. The things that once cause emotional (bordering on physical) pain will one day, someday bring even the slightest smile to your face, reminding you of a former love, be it an ex-significant other or someone taken too soon. One day, you'll make it through a saved voicemail without hanging up and reaching for wine. One day you'll keep the TV on for their favorite part of their favorite movie. One day, you'll order their go-to at Five Guys without ugly crying. One day, you'll remove them from your phone favorites and maybe even delete their number.

Some days, you might not even think about them -- and that's okay, because one day, you'll love with your whole heart again while holding close the love that came before. Everything happens for a reason way bigger than us. Every path is an important piece of some fucked up puzzle we may never put together but, finished or not, it'll make a great story.

In my case, she'll always be a part of mine, even after Google Maps sends out the truck for a retake.

Update: Seven months since this was written and I'm still emotionally triggered by Sister Act.