I have been a volunteer clinic escort at an independent abortion clinic in northern New Jersey for almost two years.

In that time, I have been berated, cursed, elbowed and even sexually harassed. I've seen women reduced to tears because grown men stood and screamed at them that they are murderers who are going to Hell.

I've calmed down angry companions who worried for the safety of their girlfriends, wives, and friends as they walked through a gauntlet of hatred. I've blocked cameras from filming teenaged patients without their or their parents' consent.

It's amazing what happens to you when you are swept up into the kind of chaos that exists outside of legal abortion clinics. The noise and the gruesome signs seem to become a blur, and my focus centers on one thing: get the patient in the door.

A few weeks ago, I was walking up to the clinic door to start a Saturday morning shift, just like any other day. I had a full team, a dozen donuts, and the sidewalk was oddly deserted. But as I opened the door to the clinic, I got an uneasy feeling in the pit of my stomach. I put on my vest, glanced out the window, and said to my fellow volunteers, "Something is weird today."

"When the anger and threats from anti-choice protesters fill the air around me, I go into a centered zone."

Call it clinic defense intuition. Soon, there were over 20 people outside the clinic, collecting en masse around the 8-foot buffer zone that guards the clinic doors.

Things quickly became chaotic on the sidewalk. Half a dozen men took turns screaming into a megaphone, pointed directly at the clinic. "God hates sinners and he hates you!" "Don't murder your child, ma'am!" "Stand up for your child, Dad! Be a man and don't let her murder your baby!"

In those moments, it's actually easier than you think to not respond. I've been properly trained, and I know what my job is. I'm not there for the protesters or their vile hatred. I'm there for the patients and their companions. I'm there to show them that they do have support, that it's okay to make this choice. I'm there to be their human shield. 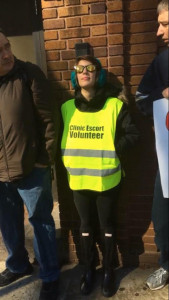 I know this, and my body knows this. When the anger and threats from anti-choice protesters fill the air around me, I go into a centered zone.

So when a cab pulled up to the sidewalk, I did what I know how to do. I walked up, along with another clinic escort volunteer, and tried to explain to the patient and her companion what was happening. We were in the buffer zone, I thought. I have some time, I thought. They can't get in her face here, I thought.

But they did. They rushed the cab, screaming at the patient and her companion. They blocked them both from getting out of the car. They shoved their horrific, offensive signs into the windows of the cab. I told them, "You can't block the car! That is a violation of the federal FACE Act. You are in the buffer zone! YOU HAVE TO MOVE."

Nothing. They just kept coming. I radioed for our security guard, who ran outside and threatened them with arrest if they didn't move away from the car.

I walked with her inside and that's when I noticed: She was just a teenager. Her terrified, tear-stricken face was ghost white. I wrapped my arms around her; I didn't know what else to do. As she sobbed, I just kept repeating "It's okay. It's over now. It's okay. You're inside. It's okay. It's all going to be okay."

"Volunteering as a clinic escort is the most fulfilling, important thing that I do ... Clinic escorting is not about abortion; it's about humanity."

When I went back out onto the sidewalk, I looked around at the cast of bigoted characters who call themselves "Christians" while retraumatizing a teenage rape victim. I often say about clinic escorting that when I do it, I see the best of humanity and the worst of humanity.

The best? The people with whom I volunteer, and the committed and compassionate clinic staff who rise above the threats and intimidation to provide quality care to people who need it.

The worst? The men who stand and scream at women and girls, who call them murderers and sinners, who film them and plaster their images across the Internet.

Volunteering as a clinic escort is the most fulfilling, important thing that I do. It's a true act of selflessness, not just of being selfless but of losing yourself. When I'm on the sidewalk, I'm not Lauren, the writer and activist; I'm a clinic defender, a symbol of support and compassion.

The screams and the shaming and the cruel signs are just a reminder that the work that I do is meaningful and necessary. Clinic escorting is not about abortion; it's about humanity.

As long as there are heartless, hateful people who stand and scream at women for their private reproductive choices, I will do this work. I will continue to wear my neon vest with pride and try to make the world a little more compassionate place, one patient at a time.

If you're a clinic escort and are interested in sharing your story, email A is For board member Lauren Rankin at lrankin@aisfor.org.

This post is part of A is For's Clinic Escort Story Series. To read more entries, click here.