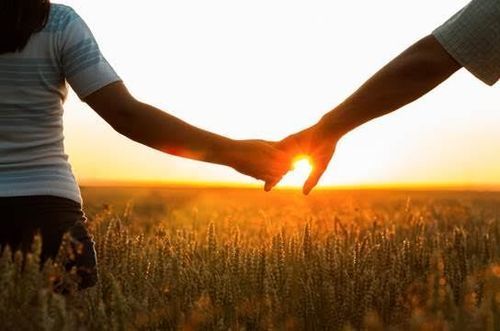 Two years ago, Hope R., 50, decided she was done with relationships for good. Four previous marriages had left her skeptical about the idea of true love, and trying to meet someone online seemed more trouble than it was worth. She had just logged on to a dating website to delete her profile when she received a message from one last would-be suitor. Abe's* timing was perfect, and so was he.

Within a month, emails and texts turned into bike riding and listening to live music together. "He's a hermit at heart and I love to 'go and do,'" Hope explains. "As Tom Cruise said in Jerry Maguire, we complete each other."

Because both had been burned so badly with previous marriages, neither wanted to marry again. But last January, Abe bought Hope a ring and asked, "Will you not marry me and spend the rest of your life with me?"

But this January, a year into their commitment, Abe felt exhausted and rundown. Even a simple task around the house caused him to repeatedly need to sit down. Worried, he went to the hospital. Tests showed severe anemia -- and something else.

Two days later, he started equally aggressive treatment -- high doses of chemotherapy that left him sick and in the hospital for weeks.

He's home now and doing well. But "it's a crapshoot as to whether or not the cancer will come back," admits Hope.

More from The Stir: Sexual Assault Survivors Speak Out to Help Other Victims Find Their Voice

Here, in an exclusive to The Stir, she shares what it's like to have cancer become part of your relationship, and how, despite Abe's diagnosis, their commitment is stronger now than ever before.

The Stir: How did Abe tell you about his diagnosis?

HOPE R.: He called from the hospital and said, "Hey, they figured out what's wrong with me. I have acute myeloid leukemia." The first thought that went through my mind was, "Oh my God, my grandmother died of leukemia." I was floored -- I literally sat down in the middle of the kitchen floor.

The Stir: How has Abe's illness altered the dynamic of your relationship?

HR: We've definitely become closer. Abe has a hard time showing his feelings, a hard time saying, "I love you." Since the diagnosis, he's been saying it more often -- not only to me, but also to his children [both Abe and Hope have adult children from their previous marriages], his sisters, and his mom.

We've also started planning things to do now that we originally thought we would do in the future. We were going to buy a house later but bought now. We went on a cruise. We're planning to take a road trip across America -- something I've always wanted to do.

The Stir: How do you feel his illness has changed you?

HR: I'm learning that I'm stronger than I thought, that I can deal with more than I thought instead of depending on others. For years, I always put other people first and myself last, never could say "no" to anyone I could help -- sometimes to my detriment.

I'm learning that I can say "no" without alienating anyone, that I have to keep my resources for my fiancé.

More from The Stir: Mom Writes Own Beautifully Defiant Obituary Before Dying of Cancer

The Stir: What about Abe? How has he been affected?

He's become even more introverted, moody, and quick to anger. Then he gets mad at himself for losing his temper.

One thing that hasn't changed is he's always been one to "take a backseat" -- a characteristic we share. Despite his illness, he still has a tendency to do that.

On a recent outing for my birthday, he was starting not to feel well but refused to tell me. I kept asking him if he was okay and he kept saying yes, but then he became pale and short of breath. When I asked him why he lied that he was okay, he said it was because he didn't want to spoil my day.

The Stir: What's the biggest challenge you two are facing?

HR: On my side, the hardest thing is his becoming even more withdrawn and feeling like he's shutting me out. One evening, he was especially quiet. When I asked what was bothering him, he looked at me and said, "I would be okay with it if you wanted to leave. This isn't your fight. This isn't what you signed up for."

I told him he was right, I didn't sign up for this, but it wasn't his right to make this choice for me. I was choosing to make it my fight also.

[Another] thing that's been hard for him to deal with is finances ... Since his diagnosis, he hasn't been able to work. He's gone through all his accumulated sick/vacation time and has been placed on short-term disability, which is only a small percentage of his pay.

... I know he's worried about paying his share of the monthly expenses, plus the medical bills. Even though he has pretty good health insurance, it doesn't pay everything.

More from The Stir: 10 Moms Share What They Want You to Know About Autism

The Stir: How do you two keep each other's spirits up?

HR: He says just having me around keeps his spirits up. Plus, when his health permits, I find things for us to do so he's not sitting around, focusing on what's going on. I keep my spirits up for him -- I know the value of keeping a smile on your face around someone who is ill.

Once or twice, I did break down in front of him, and he said, "Hey, we got this. You know we got this." If he can feel that way, so can I.

The Stir: What inspires you to stay together?

HR: Love. After 30 years, I found my soul mate. I love him and will fight for him, even if he gets to a point where he can't fight for himself. I will make sure his wishes, whatever they are, are carried out.

* Name has been changed

Stepanie Booth is a writer for The Stir