On Thursday night, my husband and I were having one of our usual arguments -- I was saying our adopted dog Murray is Jewish because he has a Jewish mom; Ray made the case that this made no sense religiously, spiritually, culturally or caninely -- when we heard a thud from our bedroom closet.

Figuring it was our daredevil cat up to his usual mischief, I got up to see what heavy object Derrick had decided to knock off a shelf this time.

Instead, I found Derrick himself lying on the closet floor, on his side. He was panting. Then, quickly, he stopped.

We thought he must have fallen. We were worried he'd broken his neck. We scooped him up and drove off to the emergency veterinary clinic, where we were told that it was too late. That he had probably died, almost instantly, of a stroke or a heart attack.

The clinic gave us a private room to say goodbye. We kissed Derrick's face and his little pink paws, and cried into his soft orange fur. Then a vet tech carried our boy off, wrapped in a towel, holding him like a baby, which we appreciated, though alive he never would have allowed himself to be held like that; he'd have wiggled and scratched his way out of that towel in a second.

Ray and I came home, and -- even after where we'd just been -- expected Derrick to make a dash out into the hallway when we opened our apartment door. 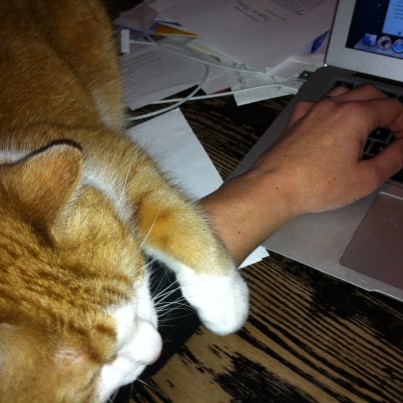 Derrick came into our lives about five and a half years ago. He was 1.5 pounds at the time. He'd been found as a wormy stray kitten, with ticks on his face.

I was a bit of a stray at the time, too -- in my mid-30s, living in a packed group house because I couldn't afford my own place, and working for a charming guy who used to call me into his office every day for a nice long scream.

Ray and I had just started dating a couple of months earlier. We'd been friends for a while, and were talking about moving in together. I liked Ray a lot but wasn't crazy about his apartment; he knew I'd be more likely to agree to stay there, till the end of his lease, if he could offer me health insurance, letting me quit my lousy job to go back to freelance writing, and especially if there was also a pet involved.

The writing's had its ups and downs, but living with Ray was great and we loved Derrick as ferociously as he loved attacking our feet, right from the start.

Yes, we were covered in blood from his razor-sharp claws. He could be such a tough guy he even intimidated my brother's husky -- we found her standing in a corner of the kitchen shaking, after their first encounter.

And despite all the wet food, and the toys, and the love, Derrick never missed an opportunity to make a break for it. We couldn't open the apartment door without him dashing out. Usually we caught him before he got down even a flight of stairs. One time we didn't realize he'd escaped until our neighbors came up in the morning, cat in hand, to say he'd spent the night with them.

But what can I say? He was fun! He was ours. And it was the boring, day-to-day stuff we loved the best.

Derrick's heroic leaps off tall pieces of furniture. Watching him chase a plastic milk tie around the apartment, or jump out from behind the shower curtain to scare whoever was just trying to brush their teeth. His manic sprints up and down the hallway. The hours he spent gazing with sinister intent at the birds with the misfortune to live in the trees underneath our apartment windows.

He stole one of my favorite sweaters, carrying that ever-rattier piece of black cashmere around the apartment in his mouth and having his way with it when an amorous feeling struck. I tried to reclaim that sweater; I tried to wash, then protect it. Derrick always took the sweater back. I finally gave in. The sweater was -- hilariously, if a little disgustingly -- his.

Even watching him eat was delightful. He got this great, stern look on his face, like he was angry with the kibble for being so crunchy.

Long after that first lease was up, and we'd moved into a new apartment -- even after getting married and deciding that we were not going to have human children, me having two novels published, and adding our dog and then, more recently, another cat (also arguably Jewish) into the mix -- I was still filled with joy when I woke up in the middle of the night and found my little feral Derrick sleeping next to me. 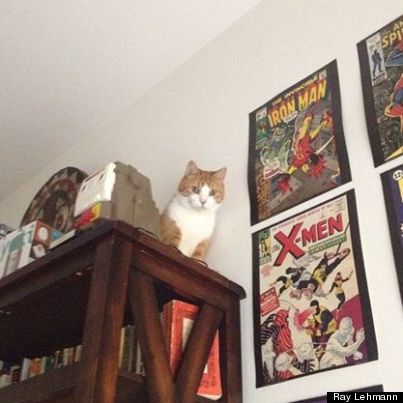 Derrick up on one of our bookcases

My husband describes what we've been going through as a kind of post-traumatic shock -- reliving our cat's death, over and over, "to try to find something we could have done differently, and finally deciding that there wasn't," is how Ray puts it.

That period is starting to end. Eventually, we will be at the point where thinking about Derrick makes us happy; we will have a new argument about if we should have sat shiva -- the Jewish period of mourning -- for our cat.

But it's only been a few days. And my heart is still breaking every single time I carefully open the front door, trying to outwit a cat hellbent on escape, then remembering Derrick isn't there to try.

Even that poor sweater is still sitting on a table, covered in his hair; I can't bear to wash it one last time. We've been talking about burying it with Derrick's ashes, someday, when we are out of this current apartment, if we ever have a house with a yard.

Murray the dog, and Elf the cat -- the newest member of our household -- have been comforting, in the meantime. It is possible they are grieving, too, or that they just know how much we need them. They've let us hold them closer than usual, for longer than usual.

We've been heartened, too, by the many people who have reached out to us, to say how sorry they are that we lost our beloved cat, our precious Derrick; we now live in a world where people take our relationships with animals seriously. Our wonderful neighbors -- the ones who took him in that night he successfully got out -- this time brought us brownies, and a cat sympathy card.

A lot of people have been telling us that Derrick was lucky to have us. That we gave him a great life.

This soon in, still in the thick of grief and confusion, all I am certain of is that we miss our Derrick like mad. And that it's we who were lucky, for the great life he gave us.