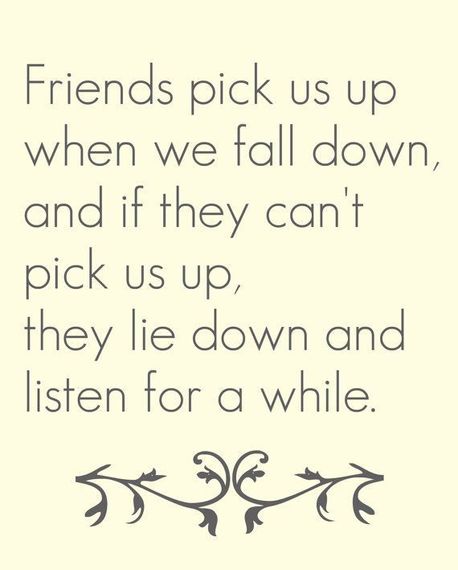 Friendship is so simple when we are small, two babies playing next to each other, aware of the other but not necessarily interacting. Then we get a bit bigger and we both like Cookie Monster and that's enough. Time goes on and we have more things in common and real interaction and even an argument over who got the bigger half of the cookie. We'd still pinkie swear that we are "bestest friends FOREVER!" In adolescence and tweendom parents are hyper focused on alienation and bullying. As the mom of two girls, I spend more time helping them navigate the complexities of friendship than math, science and history combined.

Somehow though, we are taught to believe that we outgrow a lot of this. That as adults we've survived enough catty, backstabbing, gossiping hell for a lifetime. That we will settle into adult friendships with a calm and ease we've earned. And, for many, this is true. It is also true that by the time we are adults, we have learned and grown enough to foster healthy relationships and walk away from toxic ones. That we've lived enough to know the difference.

When you make the decision to get divorced, it's interesting who you choose to confide in at first. It's not always your closest friends, per se. It's like a clown car of people who have the right strengths, views, open arms, who lack judgment and just make sense for some reason you can't explain at all. And then it's out and you wait for the gossip, for the condolence calls and for something you didn't plan on - those you don't hear from at all.

You realize that for some it's a need to take sides - sides that don't exist in your case. For others, it's too much. Your choice makes them look harder at their own relationship and question, wonder and fear. That part hurts, but you are too tired to focus on it for long. The ones you really don't count on though are the people who judge. Those who think you could have tried harder, pushed on for longer or simply that you should sacrifice everything and anything for your children. You resign yourself not to let that hurt - good luck with that.

As time goes on even the best of them move on with their lives. Your brave face is mistaken for a strength you don't actually own and often, you are alone. But, anyone who has been down this road knows that divorce is like a death and the mourning process is slow and seemingly endless. In Judaism there are rules for mourning - Shiva, Shloshim, Kaddish, Yizkor and different lengths of time depending on who the deceased was. There are no rules for the end of your marriage, no specified time or tradition. It's physically, emotionally, financially and spiritually devastating.

Sometimes you wish the phone would ring and the friend on the other side would just be there to check in. There are days when asking for any more attention, support or love seems selfish and impossible. You hear about yourself through the grapevine and try to ignore the gossip or the accusations when you decide to share your journey in this very public sphere. You do your best to remind yourself that until you've walked this path it cannot be understood. You are grateful for those who never waver in their support and you make it your mission to be as good a friend. You remain committed to being "all in."

Often, new friendships form and you feel blessed for that, but you can't help but wonder. You thought you knew all of the changes you'd endure when your marriage was over, you'd considered each one carefully thousands of times. But this one - this wasn't on the list. That there would be friendships irrevocably changed or lost as part of the process. The list didn't consider the fragile and complex nature of female friendships, but it should have.