It's been a little over a year since I rescued my pit bull, Romeo, and the last 14 months can be summed up like this: get good harness, secure garbage before leaving, be patient, expect barking, expect cuddling, expect a few rude comments here and there, be gentle yet firm and remember he was abandoned once, and the memory of his old family is still a big part of who he is. 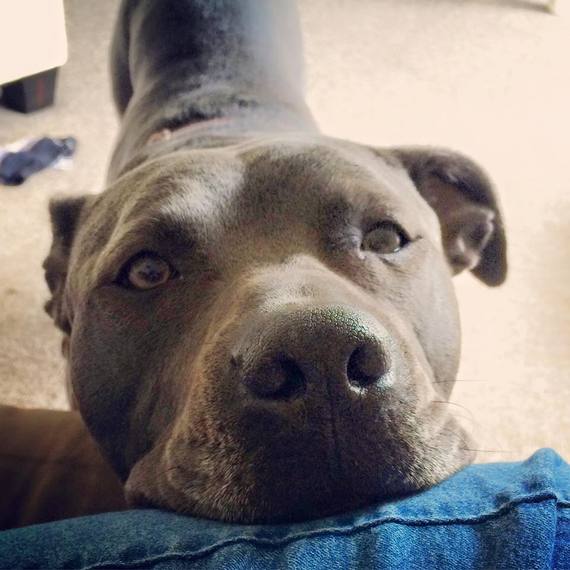 Well, I love him.

I love his big bark and his demanding need to constantly be resting his head on me (or anyone who will let him, for that matter). I love the way he runs and his stance and how his eyes look when I give him a treat and his beautiful steel grey coat. I love that a year ago he showed very little excitement, and now he can't contain how happy he is when I walk through the door. I love that he rarely ducks his head out of the way when he's in trouble, and that I can now touch his back paws and tail with no issues. I love that it took months for us to get to this place, and I love how much he trusts me now.

I also love that he doesn't chase our cat around the house anymore, and I'm pretty sure she's happy about that too!

But honestly, Romeo wasn't an easy rescue. Like a lot of rescues, pit bulls especially, he came with a lot of baggage that needed worked through. There were many moments in the early months when I thought adopting him was a mistake. I questioned my own ability to handle him and wondered if he'd ever learn to listen. I asked questions like, would he ever be able to play with other dogs? Could I walk him down the street without him going bonkers if we saw someone? If he got loose, would he come back to me? Or worse, would he ever attack?

It was in those moments I had to step back and remember all the small details about him. He found himself on death row and when I got him, all signs pointed to him being mistreated and lacking proper socialization. I had to give him a chance and allow him to give me one too. For months and months, Romeo and I went on countless hikes, car rides, trips to the pet store and the dog park together. There were hours and hours trying to figure one another out. I've had to learn his triggers, his needs, and what makes him happy. He's had to learn a new name, not to chase the cat, and that if he misbehaves he won't get hit... among countless other things for both of us as well.

I remember the day I was approved to foster him. He was in Columbus, I was in Cleveland, and at that point he should have already been euthanized. A quick walk down an empty hallway could have been his fate, but thankfully the shelter held out one more day. I had no idea what I was getting myself into but even when he was hours away, laying in a kennel wondering what was going on, I think I knew he was mine. 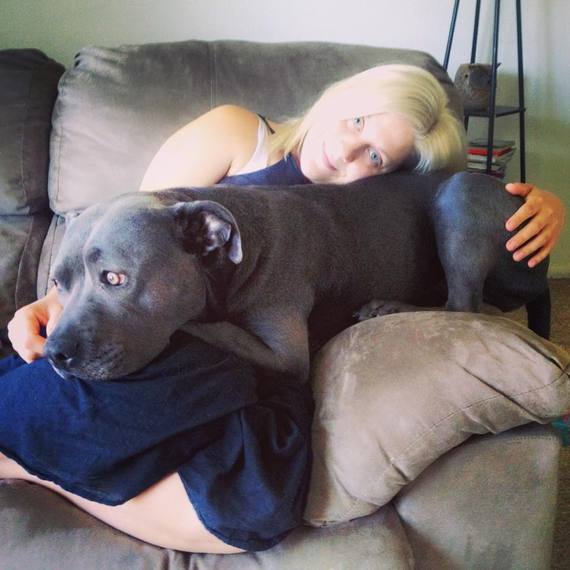 To say it simply, rescuing my pit bull has taught me that love takes time. It's taught me that love is hard work. And that love is worth it. I "rescued" Romeo, but I can't begin to tell you how adopting this big-headed pit bull has rescued my heart and changed the dynamic of our family forever. A family that, without a doubt, he was always meant to be a part of. A family who can't imagine life without him. He's a lover. There are days you can see it on his face that all his gentle soul needs is the comfort of a warm, safe body close to his. Someone who will love and protect him.

Someone who will never abandon him again.