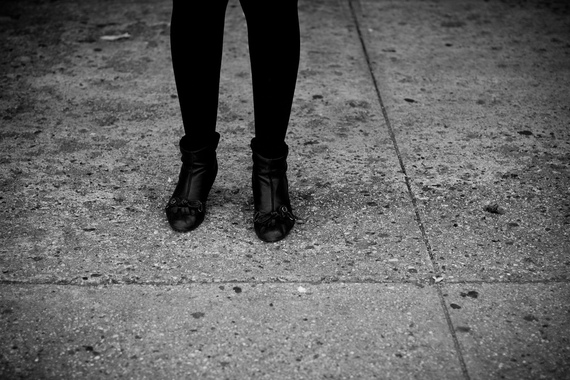 "You're very beautiful," the man on the corner commented as I walked by.

His voice was calm; he might not have meant any harm. But he was just one of many men to have offered their unsolicited opinions on my appearance over the past week, one of whom had stepped into my path and gotten in my face as he delivered his creepy line. I had had enough.

I turned toward him, furrowed my brow and said with irritation, "I don't want your opinion."

"Oh, okay," I heard him say in a sarcastic voice as I turned around. "Well, then have a nice day!" he yelled after me as I started to cross the street. His voice grew louder as I got further away. "Actually, don't have a nice day! Also, YOU'RE UGLY!"

I stared straight ahead and walked resolutely toward the elevated rail station, but my heart rate was up. He sounded unstable, and his disproportionate fury told me that this was not a person in control of himself. I didn't want to become the target of his pent-up aggression about who knows what.

As I sat down on the train, I took a few deep breaths to calm myself down, but I couldn't help replaying the scene in my mind, thinking of what I would have liked to say to him.

But of course, now I had been reminded of why I rarely did respond--because these were unpredictable strangers, and it wasn't worth putting myself in further danger in order to speak my mind. Realistically, a short, reactive confrontation like that was unlikely to change deep-seated patterns of sexist behavior or a man's lack of respect for women. And if men twice my age really thought that their lascivious stares or pronouncements were doing me a favor, then there was more confusion there than I usually had time to sort out on my sidewalk commute to somewhere else.

Still, it doesn't always happen like that. Days later, just a couple blocks away from Tantrum Man, an older man weighed in on my appearance as I made my way home from the grocery store.

I could feel his eyes on me as he began: "What a lovely, beautiful--"

"I'm not interested in your opinion. Thanks." This time I smiled calmly and said this in a neutral voice.

I was not amused to find that he was still walking behind me a block later. He caught up to me as I was waiting to cross a busy intersection.

"Here it is a lovely, beautiful day, and you got your panties in a wad for no good reason," he said as he walked up to stand beside me on the curb. His tone wasn't hostile, but the words were demeaning. (Basic human respect tip: conjecturing on the state of a stranger's underwear is NEVER an appropriate conversation opener.)

I inhaled slowly. "The reason I'm upset," I told him, "Is because I can't walk around here a single day without some guy commenting on my appearance, and I just want--"

"I was just trying to say hi."

"Well then just say hi. That would be fine." I explained that "compliments" like his were threatening because I never knew where they were headed or what he might say next. Plenty of guys went beyond "friendly" behavior.

"Like what do they say?" he asked as the light changed. "How unfriendly can they be?" He seemed genuinely perplexed by my concerns.

In the time it took us to cross the street, I told him how some of the men who have taken an interest in me on the street have been intimidating, or even violent. "You need to be aware of how women feel about your comments."

"Well, I appreciate that," he said as we stepped back onto the sidewalk. "Lesson learned. Have a nice day!" He turned to walk away with a genuinely friendly wave.

I continued down the sidewalk with a bemused smile, taken aback that he had listened respectfully and apparently been able to receive my point of view.

My experiences with street harassment have taught me two things. First, I am not responsible for controlling men's behavior. Often, getting out the situation as quickly as possible is the best thing for me to do.

And second, men are individuals who are capable of change. Despite the prevalence of rape culture, conversations like this one give me hope for a society in which men and women treat one another with dignity and respect as equals.

Ultimately, we are all looking for love and respect. I believe that one or both of these unmet needs have been at the root of every negative experience I have ever had with a stranger. Many of the men who catcall women on the street don't have any social skills in their repertoire for engaging with the opposite sex in a healthy way, and they act (or react) out of their own loneliness and pain.

This doesn't excuse the behavior, or make it any easier to deal with when I'm the target of their dysfunctional efforts at connection, but it does help me to understand it.

Working towards justice and speaking the truth are things that I am still learning to do in love instead of anger. It's easier to do when I remember that my enemies are not other human beings, but destructive behaviors and the belief systems that drive them. Behaviors, beliefs, and people can change.