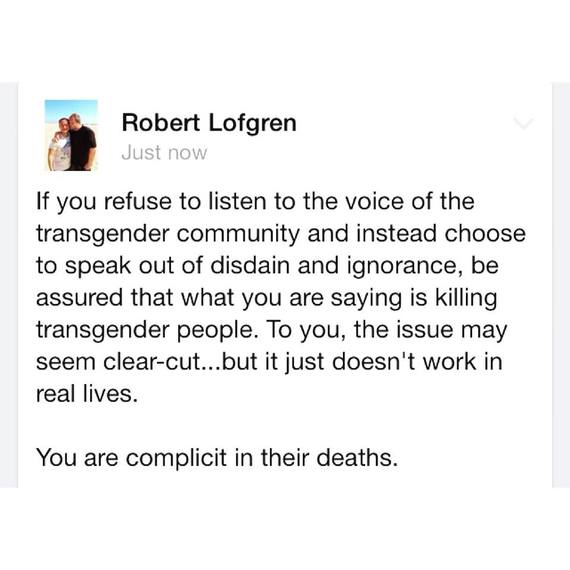 A while back I was called "a special kind of stupid" for sharing the screenshot above in response to a conservative evangelical Christian's post about the Caitlyn Jenner hype.

In the same thread, another person said I was preaching "the Gospel according to Suzanne" because I suggested that when the Bible doesn't speak of an issue (in this case, transgender individuals), we must always approach it with love.

Over the same time frame, my children's picture book, Rumplepimple was launched. This tore open the wound that my relationship with my wife Diane has created with her beloved sister. Rumplepimple is a dog who's family structure mirrors ours; he has a sister cat and two moms. Diane's heart has been sick over her sister's unwillingness to engage in conversation about God's view of same sex relationships. Having come from the same background, she understands the conservative evangelical view because she held it. Given my Catholic background, I also get it. But our attempts to explore the scriptures about the issue with her sister have been met with slammed conversational doors at best, and claims of religious persecution at worst.

So I've been pondering. And as part of these ponderings, I thought about Jesus who was harsh to only two groups: those who turned His father's house into a marketplace, and the pharisees, who blocked the way to the kingdom and bore their religiosity like a golden hammer.

Evangelical Christians tend toward a Bible-alone theology, and tend to believe that the scriptures are evergreen in their entirety. The approach generally seems to be that all the rules presented then still apply. (Except in the case of things like hair cuts, fabric composition, stonings, and dozens of others dismissively lumped into "Old Covenant".) What struck me as I thought the situation through was a new kind of hypocrisy.

It seems as if this particular brand of modern Christians dismisses the entirety of Matthew 23, apparently deeming it as merely historical. Perhaps snickering at those persnickety Pharisees, who counted cumin seeds and nagged about unclean creatures in the meager wine cups of the poor. These moderns seem to feel good about what they believe is a simpler relationship, based on faith alone, and if Jesus' woes apply to anyone, it's to the Roman Catholics.

But this is exactly the kind of viperish hypocrisy which Jesus condemned. Out of one side of the pulpit we hear that all of the scriptures continue to apply to Christians today: all the parables, all Paul's warnings about sin, and most especially those meager mentions of same sex relations.

That same pulpit doesn't seem to think Jesus' woes should be viewed as a warning to God's people today. This is exceedingly odd, given the unprecedented harshness of Jesus' stance, and the sheer force of His derisive disapproval.

Jesus never speaks to anyone in the scriptures that way again. It's to this group of rule-wielding God defenders alone that He unleashes the full force of His verbal condemnation. And remember, conservative evangelicals, this warning is evergreen. He's still unleashing His disapproval on those of you who continue to do it today:

Matt 23:13 "Woe to you, teachers of the law and Pharisees, you hypocrites! You shut the door of the kingdom of heaven in people's faces." 35 "And so upon you will come all the righteous blood that has been shed on earth"