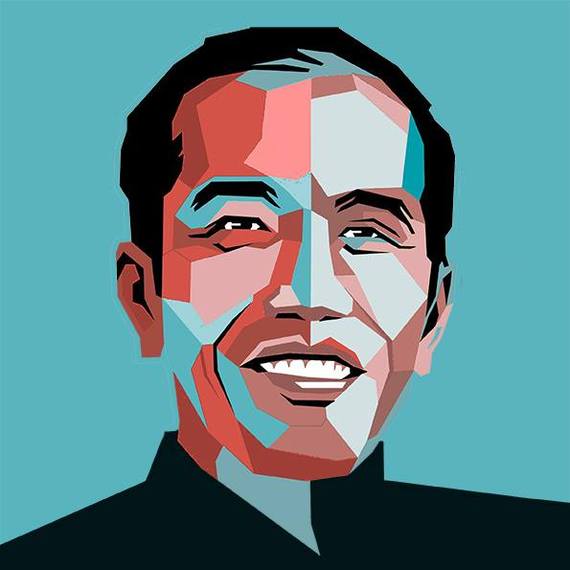 His Javanese fans call him the 'Barack Obama of Indonesia.'

At age 53, the reformist Jakarta governor, Joko Widodo - or 'Jokowi' - is very likely to become Indonesia's next president, with reliable 'quick counts' giving him a margin of around 52% to 48% for his rival, former Suharto-era general Prabowo Subianto in yesterday's fiercely contested presidential election.

Though the final vote won't be announced until July 22, leaving Indonesia in a two-week state of semi-uncertainty, the 'quick count' results from a half-dozen reputable institutions are generally consistent, they were reliable indicators of the final vote results in Indonesia's April legislative elections, and they have been reliable indicators in past national elections. Oxford University's Kevin Fogg, an expert on Indonesia, writes that Jokowi's 'quick count' margin places him safely beyond the realm of 'dirty tricks, challenges, or underhanded moves,' despite Prabowo's alternative declaration of victory, on the basis of less reputable counts from Prabowo-friendly media.

Indonesia, with nearly 247 million citizens, is the world's fourth-most populous country, the world's third-largest democracy, Asia's fifth-largest economy, and it's an important strategic and trading partner for China, the United States and Australia.

Jokowi's apparent victory will be welcomed in Washington, Brussels and Canberra because it gives Indonesia a modern leader whose principles are firmly rooted in Indonesian democracy, not Suharto-era authoritarianism. It will also be welcomed among investors in New York, London, Shanghai and Jakarta, who feared that his rival Prabowo's protectionist and nationalist rhetoric could endanger foreign capital, Indonesia's rule of law and the steady political, legal and economic gains of the past decade under outgoing president Susilo Bambang Yudhoyono.

A victory for Indonesia's democratic institutions

Prabowo, Suharto's former son-in-law, spent parts of the campaign disparaging the idea of 'one person, one vote,' and called into question whether 'Western-style' democracy was an incredibly good fit with Indonesian values. He waxed about restoring Indonesia's 1945 constitution, which would have rolled back direct presidential elections and would more easily allow the president to suspend Indonesia's legislature on the basis of 'emergency rule.' Investigative journalist Allan Nairn, who covered the East Timorese struggle against Indonesian rule, published excerpts from a 2001 interview with Prabowo in which the former general argued that Indonesia wasn't ready for democracy because it still had 'cannibals' and 'violent mobs.' Though Prabowo ultimately tried to assure voters of his respect for the democratic process in the 2014 campaign, and though he was Megawati's running mate in her failed 2009 presidential campaign, Prabowo consistently deployed rhetoric reminiscent of Indonesia's first two authoritarian leaders, the communist Sukarno and the anti-communist Suharto.

The Asian financial crisis of 1997 that swept Suharto out of power after three decades ushered in a new era of reformasi that placed Indonesia on the path to an increasingly robust democracy. Though it's been 16 years since the fall of Suharto, Prabowo's victory could have jeopardized Indonesia's progress. The 2014 election marks just the third peaceful transfer of power since 1999, and it's the first occasion when one directly elected president will transfer power to a second directly elected president. Though the Yudhoyono administration has assiduously respected democratic values, it's easy to forget that Indonesia's democracy is still nascent and not irreversible.

Prabowo launched his candidacy on horseback in March at a military-style rally in a Jakarta stadium, and he spent much of the campaign pledging ' 'firm' leadership with a healthy dose of Suharto nostalgia. A leading military general from the 1970s until the fall of Suharto, he's been accused of human rights abuses while commanding Indonesian forces in East Timor in 1983, and his career ended in 1998 amid accusations that he ordered the kidnapping and torture of nearly two dozen pro-democracy activists. Those charges, which continued to haunt Prabowo's current campaign, were sufficient to prevent Prabowo from receiving a tourist visa to the United States in 2000 to attend his son's university graduation.

Though opinion polls gave Jokowi a 20% to 30% lead just weeks ago, Prabowo narrowed that lead over the past six months on the basis of his stronger presence within Indonesian's television media, his savvy social media presence and his skillful ability to build a wide alliance that included three of Indonesia's four Islamist parties; Golkar, a center-right and still-powerful relic from the Suharto era; his own nationalist Gerindra party; and Yudhoyono's ruling Democratic Party.

Whispering campaigns against Jokowi, which labeled him both a Christian and Chinese, also boosted Prabowo, as did the former general's relentless attacks on Jokowi's national political inexperience. All of this made for an incredibly tight race in its waning days, and it will leave Jokowi's supporters somewhat anxious until the final results are announced. Prabowo's campaign prowess transformed a Jokowi coronation into a referendum on whether Indonesia should continue down its democratic path or return to at least some Suharto-era policies.

Jokowi's apparent victory means that Indonesia won't begin a experiment with Suharto-era 'New Order' policies that would herald a significant backslide. It will also be greeted by a tremendous sigh of relief within the Obama administration, which has enough foreign policy challenges without the diplomatic headache of a Prabowo administration. In south Asia alone, that includes ongoing political crises in Thailand and Bangladesh, tensions between Pakistan's civilian and military leadership and engaging India's new prime minister Narendra Modi. It would have been especially bitter for Obama, who spent four years of his adolescence in Jakarta, to watch the rise of a semi-authoritarian Suharto-era clique in his final two years in office.

A mandate for reform, but...

Jokowi rose to national prominence in September 2012 when he unexpectedly won the Jakarta gubernatorial race. With a technocratic, good-government mien, he quickly introduced an Obama-esque agenda that included universal health care program, a minimum wage hike and greater education spending, though critics argue he's done nothing to calm Jakarta's congested traffic. But it's his common touch, as much as his policies, that have made Jokowi, a self-made man who once sold furniture for a living, such a skilled politician. Both as Solo mayor and Jakarta governor, Jokowi became known for his blusukan tradition -- impromptu visits to everyday Indonesians and government functionaries to gauge his administration's performance.

Yudhoyono will leave office after a decade with a somewhat mixed legacy, with plenty of disappointment in his leadership style and that he didn't accomplish enough in the way of economic reform or anti-corruption measures. But he'll do so having deepened Indonesia's democratic institutions and the rule of law, and investors are generally happy with an economy that has generally grown at an average pace of between 5% and 6% annually over the past decade. But history will also remember him for his graceful response to the December 2004 tsunami, strengthening relations with former Portuguese colony Timor-Leste, signing a successful 2005 peace deal with rebels in western Aceh province and keeping the most heinous of Islamic fundamentalism at bay. He will bequeath to Jokowi an investment-grade, democratic Indonesia that, after years of sluggishness, is now outpacing India and other south Asian economies.

But though Jokowi's mandate is a strong boost for reform, it's not guaranteed.

Jokowi ran a stunningly poor and unfocused campaign long on personality and short on policy specifics. Even worse, as the Prabowo threat increased, Jokowi introduced ever more economic nationalism into his own campaign speeches and in televised debates with Prabowo. The result is that no one knows what Jokowi's priorities will be as president.

We don't know, for example, if Jokowi hopes to bring Indonesia into the ongoing talks for the Trans Pacific Partnership free-trade agreement, introduce reforms to liberalize Indonesia's economy or attempt to reduce Indonesia's famous corruption (Transparency International ranks Indonesia 114th in corruption perception, well behind India and China). But even if he does, he'll face significant obstacles, and he'll lead an administration with baggage from the past 16 years of Indonesian democracy.

Former president Megawati Sukarnoputri, the daughter of Sukarno, Indonesia's first president, still controls the Indonesian Democratic Party of Struggle (PDI-P), and she will wield significant influence in Jokowi's administration. Jokowi became the PDI-P's presidential nominee only with Megawati's consent, and she could ultimately wind up playing a role in the Jokowi government not unlike the role Sonia Gandhi played over the past decade in India.

Jokowi's running mate, Jusuf Kalla, is a wily official well-steeped in national politics. He served as Yudhoyono's vice president between 2004 and 2009 and, as the head of Golkar at the time, commanded more support in the Indonesian legislature than Yudhoyono's Democrats. Though Kalla's experience (and his appeal within his home island of Sulawesi) certainly helped propel Jokowi's apparent victory, Jokowi may find, like Yudhoyono before him, that controlling his vice president will be a difficult task.

Most dauntingly, like Yudhoyono, he'll face an incredibly fractured legislature. In April's parliamentary elections, the PDI-P emerged as the largest party in Indonesia's People's Representative Council with just under 19% of the vote, winning 109 out of 560 seats. In order to accomplish anything, Jokowi, Megawati and Kalla will have to reach out to opponents from the election, including Golkar, the Democrats and the four Islamist parties, all of which could dilute a real push for greater legal, economic and political reforms in a country where voters with memories of the Asian crisis in the 1990s are still spooked by the risks on exposing Indonesia to the whims of globalization. Even under Yudhoyono and a relatively pro-market coalition, Indonesia passed a law placing restrictions on the export of raw mineral ores. So even an earnest reformer will face significant headwinds, and Jokowi will find that the political forces arrayed against him can't be thwarted by taking blusukan to thousands of islands across the Indonesian archipelago.

In the context of what a Prabowo victory might have meant for Indonesia, however, a Jokowi administration represents a significantly more optimistic path for the next five years. At worst, a gridlocked Jokowi administration will nonetheless underline Indonesia's path from authoritarianism to liberal democracy.