Can a sanity rally inspire people to get out against the Sharron Angles of 2010? We'll soon find out. Let's just hope all this energy might dampen the right-wing and make extremists stand out. Whatever Jon Stewart and Stephen Colbert hoped to create yesterday, it was a massive turnout, estimates going as high as 215,000. Having been at the Glenn Beck rally too, all I can say is that everything about the Rally to Restore Sanity rally was different. Anger was out. 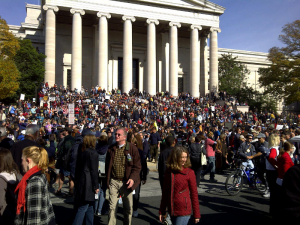 An estimated 215,000 people attended a rally organized by Comedy Central talk show hosts Jon Stewart and Stephen Colbert Saturday in Washington, according to a crowd estimate commissioned by CBS News.

The company AirPhotosLive.com based the attendance at the "Rally to Restore Sanity and/or Fear" on aerial pictures it took over the rally, which took place on the Mall in Washington. It has a margin of error of plus or minus 10 percent.

CBS News also commissioned AirPhotosLive.com to do a crowd estimate of Glenn Beck's "Restoring Honor" rally in August. That rally was estimated to have attracted 87,000 people. Amid criticism from conservatives that the estimate was low, CBS News detailed the methodology behind it here.


One of the best moments of the day was listening to Tony Bennett sing "America the Beautiful." Maybe because I was at home sipping a cold beer by then. The crush of people overwhelming at times.

"Don't tread on my head," said one sign held by a woman, a shot at Rand Paul's thugs who assaulted a woman for simply being an activist.

"Facts are cool. Reality is for adults," said another sign.

"Drinking Age is Too Damn High!"

Not surprisingly, there were a lot of mid-age hipsters.

...and oh, the smell that wafted up in one section of the mall...

Kid Rock and Cheryl Crow sang lyrics, "Screaming on the left, Yelling on the Right, while I sit in the middle trying to live my life." If anything summed up the Stewart-Colbert message this was it. A take off on Bill Clinton's "third way," with a 2010 twist, because it was delivered by a mid-age hipster just under 50, just like Bill when he designed his answer, which progressives hate today, just as Tea Party activists hate the middle of the roader Republicans.

It's the one missing element in Jon Stewart's outreach, because what he's suggesting simply isn't where the political activists today live and breathe, which includes those who hate both big two parties. Missing the mood of Americans and just how disgruntled they are with our political system.

Somewhere in between is the revolution Stewart represented yesterday. The rally more of an ode to Independents; the people with no ideology who sit in the middle and wait for inspiration from one side or the lack thereof from the other.

Politics is about differences, usually stark if the philosophies are worth anything.

That's why Sarah Palin is robocalling against Joe Sestak.

One thing Stewart and Colbert forgot is that modern hate speech began in earnest when Ronald Reagan deregulated the airwaves letting Rush Limbaugh and right-wing radio rise unchallenged, which today has led to a monopoly, but also people like Glenn Beck on Fox News, who have amplified the anger by ten. These early hate hucksters and their offspring led to the hunting of Pres. Bill Clinton and First Lady Hillary Clinton in the '90s, which ended up in an impeachment drive that the American people did not support. This was the launch to where we are today, with the rise of Fox News and the Roger Ailes candidate stream. It has brought MSNBC to the front with several hosts from the left, because Fox isn't going to tell the truth about the assault of a woman, or do documentaries on abortion doctors being murdered, rant about the union working man's plight, or even give hard interviews to Rand Paul, let alone call out Lou Dobbs, or offer special comments that channel how voters on the left are feeling like Glenn Beck does on the right. As Stewart showed, no doubt Keith Olbermann, as well as Ed Schultz, go way over the top sometimes, they both did on Hillary, but nothing compares to what happens on opinion Fox.

Even Stewart wondered aloud what his Rally to Restore Sanity was all about. In a nutshell, he represents the frustration people feel with all media that goes for ratings and rants over perspective, truth and objectivity. Partisanship and lack of transparency, lack of trust and skepticism rules today, with Stewart and Colbert getting laughs out of the circus.

Truth isn't subjective, however, which I'm reminded of every day. Sometimes one side is absolutely wrong, like when Sarah Palin talked about "death panels," or when Rand Paul talked about private business owners being exempt from the Civil Rights Act. That would have been worth Stewart or Colbert pointing out. Pres. Obama and the Democrats were wrong not to fight for the public option, but also a stronger finreg bill, should have stood strong for women instead of selling us out. But that's a hell of a lot different than Sharron Angle's charge that Second Amendment remedies should be used, which is not a way to solve differences. There is no one on the left suggesting such dangerous notions, which should have been said. No one on the left had a reporter handcuffed, like Joe Miller did in Alaska, or threatened to take a reporter out as Carl Paladino did in New York. These things matter, all of which Stewart and Colbert ignored for drawing false equivalents to the right and left.

Partisanship comes with philosophical ego, but it doesn't make you right or your point equal. It's a challenge to decipher one from the other amidst the noise.

"If we amplify everything, we hear nothing." - Jon Stewart

Stewart got that part right. Unfortunately, by amplifying left and right equally Stewart and Colbert did a disservice to the truth, which is not subjective.

If Jon Stewart truly believes that the left talking softly while the right wields a big rhetorical stick can get the job done he's not been paying attention to his own show this year and should review the tapes, starting with the ones featuring Fox.