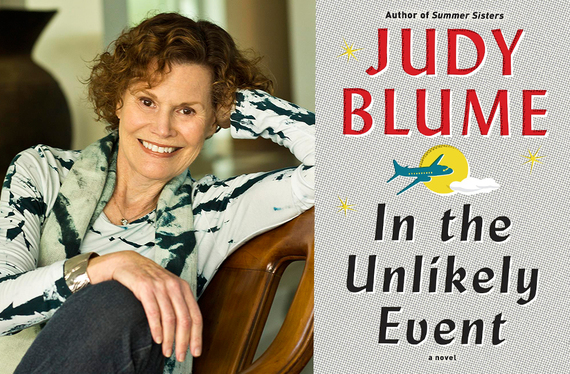 The right story can have a huge impact.

For me, one of those life-changing stories happened in 2003, after I left a campaign rally for democratic presidential hopeful Howard Dean at Town Hall Seattle. He mentioned something that sparked an idea that I couldn't let go of. When I got home that night I stayed up late and scribbled down notes that would later become a romantic comedy screenplay that would lead me from Seattle to Los Angeles. That story would eventually lead me to meet my husband, then bring me back again full circle to Town Hall Seattle to write about the woman who first inspired me to be a writer, Judy Blume.

Thanks to the Seattle Arts & Lectures series, I got a chance to learn about Judy's latest book (that sounds completely fascinating), In The Unlikely Event. I wrote about my evening with Judy Blume for Seattle Refined, but now I want to share some of the author's words of wisdom (and wit) about writing that she shared with us at Town Hall Seattle.

"I was sick all through my twenties until I started to write."

I'm a writer, photographer, and painter and when Judy made this statement, I could relate threefold. Hardly a day goes by when I don't do something creative - in fact, I can't even remember the last time I didn't at least snap a well-composed photo or two. If I go too long without doing something creative - and I'm talking about too long during a single day - I can feel it in my body and brain. Creative people have to create. Often times just picking up your pen or paintbrush and doing something, anything, is enough to break through those nasty creative blocks.

Don't think too much.

Have you ever had an idea for a story but gotten so bogged down in the research or the outcome or what so-and-so would think about it that you never even put one word of it down on paper? It's okay to think, but don't confuse thinking with writing. Start with the words in your head and figure out the rest later.

Believe it or not, even Judy Blume deals with the impostor syndrome. She learned the hard way that reading fiction while working on her own books isn't helpful for her.

When she was working on Smart Women she got so involved with the characters in Dad by William Wharton that she couldn't write for three months.

"I get my best ideas, always, by picking up a pencil."

Judy writes early drafts by hand. While I don't always go that far with my own work, I have about five million journals that I use for taking notes and fleshing out initial ideas. I keep lists of ideas written out in journals and use journaling as a method of dealing with confusion in life, as well as writing. Writing by hand is good for your brain.

If you want to publish a book, it's a good idea to start tweeting now. While Judy was already tweeting (and loving it) before writing or promoting her new book, she said that publishers really want their authors to be active on social media. They want you to have a presence.