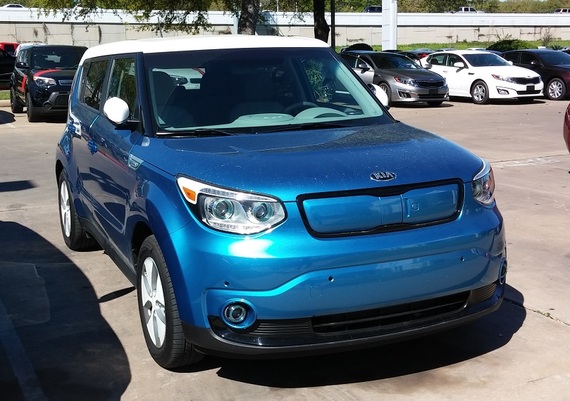 Hamster lovers far and wide were thrilled when Kia announced they were taking their hip, iconic Soul electric. Kia's EV offering is smart, sexy, fun and it stands up well to its main competitor the Nissan LEAF. Let's take a look at some of the things that Kia got right, and a few they could have gotten better, in the 2015 Soul EV.

The subtle styling differences between the gas-powered Soul and the Soul EV have largely been pulled off beautifully. Already a unique and well received design, the Soul in EV trim manages to take things up a notch. The two tone roof, reworked front and rear facias, aerodynamic wheels and visually upgraded interior let people know this is something different, something special. The EV-specific interior styling is a hit with its unique two tone leather with blue contrast welting and white "Apple-esque" plastic trim sprinkled about. The ventilated front seats and driver-only climate control settings are a dream.

However, Kia really missed an opportunity to knock it out of the park when they deleted some of the class leading options that can be found in the gas version of the Soul. Gone are the panoramic sunroof and optional 10-way power driver's seat. Kia would probably argue that they add weight and drag (sunroof), but that's understood by their buyers. EV owners are more knowledgeable about such things than the average driver. They know that highway driving with the sunroof gaping open will bring efficiency down. Sometimes however, they just don't care. Give them the option and let them decide. And since they are paying substantially more for the EV model, why drop semi-luxury items like a power seat? Then there's the case of the missing rear seat fold down armrest and cup holder. Again, EV drivers are paying a premium. Kia shouldn't take things away from them. Even with those misses however, the EV styling is a great overall visual upgrade that really sets it apart from its gasoline-drinking cousin.

Many of the biggest criticisms of the original Soul have largely been eliminated in the latest redesign and refined even further in the EV. Namely: the underpowered drivetrain, noisy cabin and rough ride. The smooth, quiet power delivery drivers get from an all-electric drivetrain is doubly appreciated in the Soul EV with its added noise reduction and lower center of gravity, thanks to the under-floor battery placement. Immediate torque takes care of the previous sluggishness. Anyone who enjoyed the previous versions of the Soul will love what the EV brings to the table. When talking about an EV, we can't overlook the all-important issue of range. Kia is right on the mark with the Soul EV. An EPA rating of 93 miles on a full charge makes it the current leader of all but the super-powered, and super expensive, Tesla Model S.

And yet, and this isn't so much a complaint as a wish-list item, Kia had the opportunity to truly thrill its customers with amazing acceleration. Instead, they provided average, middle of the pack performance. It's slightly faster from 0-60 than the Nissan LEAF, but slower than its gas counterparts and a bit of a dullard compared to BMW's i3, Chevy's Spark EV or even Honda's Fit EV. Regardless, anyone who has driven both the gas and electric Souls is bound to find that the EV offers a smoother, quieter and overall nicer driving experience.

All in all, we don't think Kia should have been surprised by the popularity of its well thought out and highly pleasing EV offering. It's a good looking, well put together package with right on the money pricing and class leading range. It sure looked like the Soul EV had the makings of a hit from the beginning.

Now if they were to add a premium package, with even slightly better acceleration, a panoramic sunroof, a power driver's seat and a fold down rear armrest, they might rightfully be surprised by how many buyers plop down the extra cash to have it all.

*Disclosure: The author is an EV enthusiast who has no commercial or professional interest or relationship with any of the automotive manufacturers listed in this article.