Let's be honest, we Gen Xers were skilled at playing sick, were we not? Our generation had to work hard for a sick day. Many of our parents worked and would have to take a sick day themselves, and let's not forget, our parents were raised by some hard-core parents (our grandparents), who sent them to school no matter what. Hello, their parents were the ones who walked five miles to get to school, uphill, in snow. So, a sniffle... or the plague wasn't gonna cut it.

That's what we had to contend with. Which is why we learned early on that we had to be Ferris Bueller convincing or we were going to school (heck, on occasion we weren't convincing enough, even when we actually were sick).

Nowadays it seems our kids are merely phoning it in: complaining about random aches (hello, do not tell me you have an achy elbow or crooked toe), not committing to their performance (refrain from stopping to chase the dog mid-whine), I'm ashamed of these kids! Which is why I give their generation this:

8 Tips To Properly Play Sick: How To Gain Your Parent's Sympathy And Maybe Even Regain Their Respect 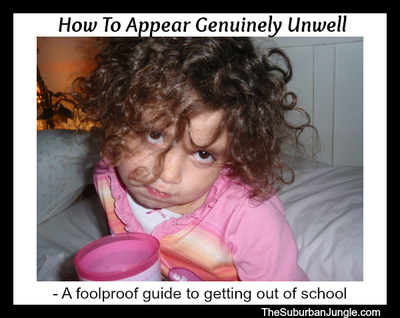 1. Complain about the appropriate body parts and stay focused. There is a general list of pains and woes we parents find acceptable to lend our sympathy to: stomachaches, headaches, sore throats, nausea. Pick one and don't stray. Don't lead in with a stomachache and think that adding a toothache, leg cramp, or shooting pain in the elbow is going to help your cause. That's an insult to our intelligence. Stay the course... a thousand points of light...

2. NEVER fake a cold. Moms can tell a real cough, stuffy nose or congested chest from a fake one. Oh, we're that good, which is why the dry Sahara Desert cough is a dead giveaway that you can and should be going to school. And never blow your nose unless there's something in there. The "faux nose blow" is a one-way ticket to the carpool lane. Remember this trusty phrase: "No phlegm or snot, home you will be not." (Say it like Yoda for your amusement.)

3. Avoid immediate trips to the doctor or the ER. A fake sick day is totally wasted if you don't get to enjoy it, duh! Here is a short list of complaints that will get you a trip to the doctor or ER without passing go (never say these things, unless they're true).

4. Avoid trips to a therapist's office. Getting too creative could send you straight to the shrink's cushy couch. Avoid fantastical verbiage like:

5. Don't oversell it. We don't have little gold statues to give out, though many a morning we wish we did. When you act so sick that you can't move, and then you fall to the floor from your bed as if you attempted to rise but just couldn't muster the energy, and then you lay on the floor like a sad sick seal moaning and only lifting your head, it takes everything in us not to fall to the ground laughing and later sign you up for Juilliard.

6. Understand the concept of temperature. Listen children, you cannot have a 107.2 body temperature and have a conversation -- or a pulse, for that matter. We get that figuring out a way to alter your thermometer is like the kid equivalent of MacGyver using a toothpick and a piece of gum to disarm a bomb, but understand the highest temperature does not win a prize -- just a funny Facebook status update.

7. Never talk about school. When trying to avoid the S-word, don't discuss it in any fashion. Don't tell us you wish you could go, but alas you're so sick. Don't mention that you have a test or unfinished homework. Don't talk about an annoying enemy at the playground or even a tutor that will have to be cancelled due to your unfortunate absence. We will put two and two together. Yep, we don't even need a tutor to do that.

8. Always remember, we're not as stupid as you think we are. Though it's hard to imagine, we were kids once too and we tried every trick in the book ... twice.

Follow these simple rules and you'll be wrongfully staying home from school in no time. That's right, you CAN fool us, or at the very least make us proud trying. (DON'T EVER ACTUALLY LET YOUR KIDS SEE THIS!)

P.S. Today, my son, J, complained of a stomachache... leg ache... elbow ache... and a nasty hangnail (which he could not find to show me, but assured me was painful, though not visible).

REALLY? He went with a hangnail/stomach/leg/elbow ache? I expected so much more.

Then Ry (my daughter), followed up with, "ditto," as if they were both afflicted by the same stomach/leg/elbow ailment. "Oh naive girl, when the ship is sinking don't hop onboard!"

They look really sick, right? DON'T JUDGE -- I thought they could use a "personal" day (I know most of you have had your share of personal days, but I'm in Florida) and I was super tired. Gen X-ers aren't stupid, but we're suckers. 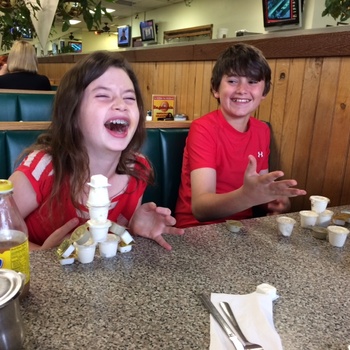 Related Story: 5 Things Gen Xers Did Growing Up That our Kids Will Never Understand

Show me the love, please come join the irony on Facebook!

More:
generation xparenting humorParenting Parentsschool closings
Newsletter Sign Up
Raise the kind of person you'd like to know
Subscribe to our parenting newsletter.
Successfully Subscribed!
Realness delivered to your inbox