It's always a good time to ask what kind of leadership we need because the world is constantly changing. But the world is not only changing. It's being dramatically reshaped, making us ask the question not just with more urgency but through a different lens.

I met with five students recently, who, not just in their ideas but in their convictions and actions, hold the answer to the question in business and in any other context. These students-together with countless others have participated in the annual Elie Wiesel Foundation Prize in Ethics essay competition for the past twenty-five years-exemplify the kind of leadership we desperately need today: ethical leadership. 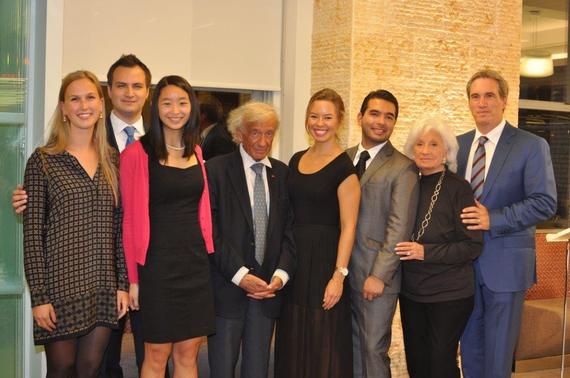 While some tend to believe that ethics or morality belongs to the "personal" sphere, cordoned off from the "professional" sphere (recalling The Godfather's famous line "it's not personal, it's just business"), the fact is that these two spheres can be no longer kept separate in a world that has gone from connected to interconnected to interdependent.

More than ever before, as we see every day, we rise and fall together. A vegetable vendor in Tunisia sparks a revolution. A banker singlehandedly loses two billion dollars, triggering a global financial meltdown. And Martha Payne, a nine-year-old in Scotland, posts about her school system's unhealthy food, endures attempts at censorship from education officials, and ultimately spawns a diet-reform movement throughout the U.K., even raising money for hungry children in Malawi. We receive daily examples of how intimately bound we are to each other: major brands changing their products due to blogger activism, workers using social media to mobilize and force companies to increase wages, and powerful leaders losing their jobs due to one tweet or leaked recording.

What these trends reveal is our new interdependency, a state in which the actions of so few are able to affect so many so far away in unprecedented ways. What happens in one "sphere" of our lives will inevitably impact the other "spheres," rendering the age-old separation of the "professional" and "personal" philosophically bankrupt and practically impossible. Everything is now personal, which is why interdependency is a moral reality.

The greatest consequence of this reality is that the only viable strategy--for individuals, teams, organizations and countries--so that we, in fact, rise together and achieve our most cherished goals, is to forge healthy interdependencies.

Healthy interdependencies, at their core, are not that complicated. They are about how we relate to each other. They're about behavior that's animated by values that sustain human relationships--sustainable values, in other words. These behaviors allow us to create value, deepen connections and build enduring relationships.

To scale these behaviors in our institutions and in society, we need leaders that not only exemplify them but can inspire them in others, and who can also effectively shape contexts and cultures that are full of these behaviors. This lies at the heart of ethical leadership.

Let me introduce you to the five students I mentioned earlier on. They are the winners of this year's Elie Wiesel Foundation Prize in Ethics essay competition. My company, LRN, shares its mission, which is why we have been the Prize's exclusive corporate sponsor and host for its prize ceremony for many years (its 25th anniversary was on September 18th this year). Through their profound words and principled deeds, these years' winners exemplify the essentials of ethical leadership:

1. Christiana Whitcomb, a student at Bowdoin College, writes about the agonizing ambivalence she feels as a volunteer on a Native American reservation. Although she is providing a helpful service, she feels that her white racial identity will likely further entrench the poor self-image that the children have of themselves, as they live in a community that suffers from high rates of depression and suicide. "I cannot quell the fear that my presence might hurt the very people I wish to help," she writes.

2. Jennifer Hu, a student at Swarthmore College, examines the question of whether deafness is more of a disability or a cultural stigma, whether cochlear implants represent a wholly laudable scientific invention or a potential threat to deaf communities and their signed languages, grounding this complex issue in the personal story of family and her sister, Sophia.

3. Alejandro Camacho, a student at the University of Texas at San Antonio, challenges his fellow students from Mexico who are studying abroad in America to make a "compromiso," a Spanish word that means an individually held obligation, with their homeland by returning, with hope, to invest in Mexico's institutions at the cost of leaving behind opportunities in America.

4. Jean-Claude Velasquez, a student at Stony Brook University, recounts what it meant to grow up an American with fluent English and deep loyalty to this country as an undocumented immigrant, providing a narrative that often - out of legal fears - goes unvoiced in this country's debates about immigration.

5. Katelyn Edwards, a student at the University of Tampa, explains how her ideas of who was normal and who was "other" were shattered after being dubbed a "white foreigner" when volunteering in Ghana, as well as provides insights about the relationship between identity and society that she learned abroad.

These students represent hundreds of students - thousands, if you count from the contest's inception - who have all exemplified three important components of ethical leadership.

The first is pausing. I do not mean just a momentary break from labor, but a deep pause, one in which we take time to reflect on the complex ramifications of our behaviors as well as determine the behaviors we need to thrive-individually and collectively-in our organizations. It is a pause that deepens our moral consciousness.

The second is moral reasoning. This is the process of thoughtfully grasping the nuances of a particular situation or issue and weighing the often-competing values at stake. It is a process that involves both head and heart, both fair-minded reason and empathetic imagination, and is best summed up by Nobel Peace Prize Winner and Professor Elie Wiesel's urge to "think higher and feel deeper."

The third is inspiration, as opposed to motivation and coercion. Ethical leaders rely less on external stimulants of behavior - carrots and sticks - and instead lead through connecting with what is deeply within people - beliefs, values, sense of purpose - and enlisting them in something larger than themselves. Instead of relying on formal authority to exert power over others, these students have used their words, weighted with moral authority, to inspire power through people.

These students, their essays, those who came before them, and all the people they will inspire are our living answer to the question with which we began. They will provide, through their example of ethical leadership, a model for their colleagues, their bosses and for the next generation of leaders to emulate.