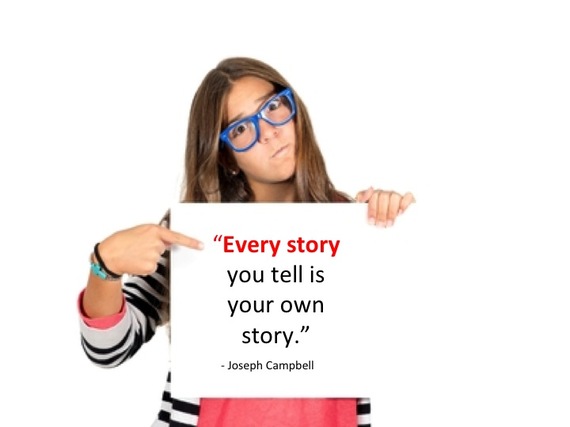 Here's a story you can probably relate to: You are walking down a street when a friend, coming the other way, stops, looks you in the eye, and asks "Whassup?" It's a question you've heard a thousand times before -- the default, open-ended salutation.

Your choices are many. You can answer any way you want, from the predictable "Fine, whassup with you?" to an elaborate monologue on any number of topics: the weather, your relationship, upcoming vacation plans, the economy, the latest terrorist attack, your aching back, and the high price of cappuccino. In that moment, there is no correct answer. You get to decide what story to tell. What you don't get to decide is the impact your story will have. That's up to the listener. But know this: your story will have impact. Everything we say and everything we do has impact, even a seemingly casual moment of passing someone on the street.

If you watch TV, you can see this phenomenon playing out daily. With an almost infinite number of topics to report on, the news that TV stations choose to communicate is mostly bad news: war, violence, political unrest, terrorism, famine, corruption, plane crashes, murder, scandal, disease, gossip, and unemployment, with an occasional human interest story thrown in for good measure so we don't all jump off the same bridge and screw up their ratings.

Sixty eight percent of Americans believe that TV news broadcasts focus way too much on bad news and yet we keep tuning in. The impact? Our state of well-being declines. We become sadder, more negative, more hopeless and depressed, exacerbating whatever personal worries and anxieties we already had before tuning in.

I'm not suggesting that news outlets airbrush the negative out of their reports. Nor am I suggesting they stop reporting on the bad stuff happening around the world. What I'm suggesting is they find more of a middle path and make more of a concerted effort to change the narrative to honor what's good and holy about being alive.

You and I are also news stations. You and I are also reporting on what's going on in the world. Like the TV executives behind the scenes, we also get to decide what stories to tell -- even on the street when a friend asks us "Whassup?" That is our moment of truth. That is our broadcast. Will our stories be local versions of the nightly news, skewed to what's bad and wrong, full of gossip and complaint, or will we choose to tell a new story, one infused with possibility, progress, insight, awareness, and hope?

What story will YOU tell today?

Mitch Ditkoff is the Co-Founder and President of Idea Champions, an innovation consulting and training company headquartered in Woodstock, NY. He is also the author of the newly published STORYTELLING AT WORK: How Moments of Truth on the Job Reveal the Real Business of Life -- from which the above article is excerpted.