You might not see it when driving past your local sports field, but trouble lurks beneath the dirt. Every year for the past 16, enrollment in Little League baseball has steadily dropped, according to reporting in the Wall Street Journal. One or two percentage points annually is the kind of slow but steady erosion that escapes notice until it's almost too late to do anything about it. Could the foundation of one of America's most treasured traditions be crumbling away, right below our feet? 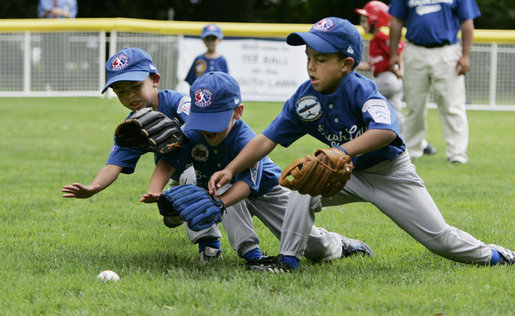 It's deja vu all over again, as Yogi Berra might have said. It's a lot like what has happened to jobs and skills -- all-American mainstays that also aren't what they used to be. Not too long ago, winning in the workplace was about being dependable, consistent, loyal, a good sport. Then suddenly, we turn around and the labor market looks like a whole new playing field, with different positions, unfamiliar rules, and a lot of people on the sidelines. What's going on?

Here are three clues to help us answer that question by better understanding the demand for skills in today's market and the gap between where we career-seekers are and where businesses wish we would be. The list was inspired by "Behind the Curve," a story about Little League Baseball that Marc Fisher wrote recently for The Washington Post.

1. Training happens on and off the field.
Training for baseball doesn't begin at a skills camp; it starts with the "fever" that many future fans and players catch as children when they open the gift of a glove or bat, watch their first game from the stands, or practice hitting the ball in the backyard. "The transmission of baseball fever relies heavily on the father-son dynamic," according to Fisher's sources in Major League Baseball, "whereas other sports are often taught in school or by peers." By the time the team brings home that first real trophy, many Little League players have spent many hours learning the game and polishing their skills informally in the backyard with family, at batting cages or the playground, with youth groups or church clubs, in the street with neighbors.

And so it is with the skills required for today's world of work. We don't begin learning when we start school -- and we don't stop when we graduate college, either. Talent is fueled by a natural curiosity and love of learning that is either encouraged -- or squelched -- at a very early age. By the time we reach peak earning years, we've spent thousands of hours mastering what we need to know from a wide range of experiences in classrooms, internships, workplaces, community service projects, peer groups, professional associations, libraries, mentoring relationships, and online.

Even as video games and computers draw some young people away from baseball, digital technology attracts them to new opportunities to master work-relevant skills "any time, any place, and at any pace." Today, "prior learning assessments" are gaining in popularity as a tool to assess the value of out-of-school learning, and an emergent ecosystem of digital badges, nano-degrees, and industry certifications are being used to validate learning and nudge the entire educational system towards more granular credentials that measure competencies rather than seat time.

2. To be a specialist or an all-round flexible player: there's the conundrum.
There is a noticeable trend toward specialization in youth sports, and Little League doesn't compete well when sides are being picked. After all, "by espousing the virtues of character, courage and loyalty," Little League aims "to develop superior citizens rather than stellar athletes," according to the association website. Many serious players are joining "travel teams and other selective, intensive programs" in other sports, according to David Odgen, a University of Nebraska at Omaha researcher quoted by Fisher. This trend not only diverts some from baseball, but favors youth who come from families and communities that can afford the cost of select sports.

The tension between narrow specialization and broad adaptability is very real in the workplace, as well, and it presents a conundrum for job-seekers and educators alike. On the one hand, as global competition gets sharper and innovation more essential, employers place high value on people who have deep knowledge in a specific area and know how to apply that knowledge creatively. But employers also list adaptability and flexibility among the most in-demand 21st Century competencies. According to a study cited by Fareed Zakaria, as many as 84 percent of employers say "they would rather hire smart, passionate people, even if they didn't have the exact skills their companies needed."

Conflicting pressures toward both specialized and broad skills have contributed to some interesting hybrids in the workplace and in higher education. McKinsey & Company reports that "about one-third of the new jobs created in the US over the past 25 years were types that did not exist, or barely existed, 25 years ago." The examples they provide include occupations that span diverse areas, such as computer systems analysts (business and technology) and fitness instructors (health and recreation).

College students are pursuing programs (some of their own creation) that give them credentials that are both specialized and cross-cutting. There is an increase in double majors at the undergraduate level (such as foreign languages and business, art and psychology) and dual degrees at the graduate level (such as JD and MSW or MD and MBA). And adults looking for new careers have driven up demand for stackable credentials that evidence a specialized set of skills on top of a more general background.

3. To win, we've got to be able to think ahead and respond to the present moment.
Fifteen-year-old Austin Albericci explained to Fisher why he left Little League: "Baseball players are thinking ahead all the time, always thinking of the possibilities -- 'If I can't get to second, do I throw to first?' Baseball is a bunch of thinking, and I live in a different lifestyle than baseball. In basketball and football, you live in the moment. You got to be quick. Everything I do, I do with urgency."

Thinking ahead or being in the moment may be an either/or situation in youth sports, but it's both/and at work. Employers say they want employees to be able to think on their feet and solve problems effectively as they arise, whether that means quickly replacing a machine part or soothing a disgruntled customer right on the sales floor. But employers also put "critical thinking" near the top of their list of key competencies.

It's not just a matter of immediate job security: being able to think critically and creatively is part of what separates humans from machines in today's increasingly automated world. Zakaria writes: "Critical thinking is, in the end, the only way to protect American jobs." He cites a 2013 study on employment by two scholars at Oxford who found that "for workers to avoid the computerization of their jobs, 'they will have to acquire creative and social skills.'" Sports players may be able to choose between games that require them to think ahead and others that are more in-the-now, but we career-seekers are in a new normal where being able to stay attentive to today, anticipate tomorrow, and creatively bridge the gap are all work requirements.

So, with all this kind coming at us, who's concerned about their bench strength? According to Fisher's reporting, both Little League and Major League Baseball are. According to the Society for Human Resources Management, employers are, as well. Many of the challenges they face are quite different, but there is something to be learned in the similarities. Perhaps strategy ideas could be shared in the parents' bleachers at an upcoming Little League game -- batter's eye view.