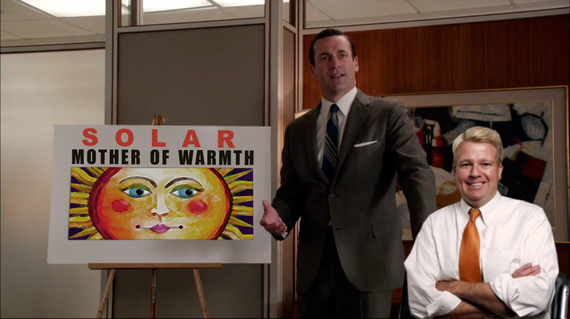 I mentioned to a reporter the other day that I suspect the so-called "Climate Deniers" are not so much denying the science of climate change, but rather they are rejecting the message we've framed for them. Think about it -- when someone tells you "the sky is falling," your first reaction is denial. It's just human nature. We hear a bad health diagnosis, our first response is denial and we go get a second opinion. We rear end the car in front of us -- our automatic response -- "I didn't do it!" Denial is in our DNA.

So I suggest, what we need is to change our messaging. And if you follow the ground breaking communications platform "Renewable Now" (and I hope you do!) then you may have seen my column suggesting we all take a lesson from Mad Men's Don Draper. I'm not suggesting we need to drink as heavily or smoke as much as the fictional AMC television character. But as an industry, let's start telling our stories better. Let's equate the very real challenges of climate change to the very real life challenges -- and opportunities -- that each of us face every day.

At SmartPower we like to say "Let's be energySmart!" But maybe we just need to be Don Draper smart!

If you've watched the AMC-TV drama Mad Men, the great 60s advertising agency show featuring Don Draper, the silver tongued creative genius from Cooper Sterling, then you know how important good story telling is to selling products. Draper has his clients eating out of his hand when he serves up his creative direction. Whether he's selling Hershey Bars or hamburgers, there's none better than Don Draper in painting the scene that is designed to move a consumer to action.

What Don is doing is reminding us that when we talk to consumers, we have to bring our message into their world, not ours. So his stories don't talk about how hamburger is made, rather he tells a story of how hamburgers make us feel.

And this is an important reminder to those of us in the Renewable Energy communications business. We can't spur people on to action by defining Global Warming as the end of the world, or about CO2 emissions and the plight of the polar bear to get our audience's attention. Believe me, environmental groups have been trying for decades to move the needle on environmental issues by focusing on these concerns. And the polling shows very little has changed in the American mindset.

I know there are still Climate Deniers out there. But honestly, I think most of them are simply denying the way we are positioning the message. To be sure, you don't have to be a Climate Denier to have a hard time believing that the end is nigh just because we've had a lot of extreme weather this winter. It's really hard for someone who's not "in the business" to understand why a lot of snow would "obviously" mean the world is in peril and connect it to Global Warming.

To back up this point, research poll after poll shows us that the climate message is alienating and confusing to regular Americans. Case in point:

A recent (March 2014) Gallup poll shows that only 24% of Americans care a great deal about climate change. That finding more or less is on par with an older (2012) Pew Research Center poll, where Americans listed Global Warming as last on their long list of presidential and congressional priorities.

But here's what people do care about: They care about themselves. And I don't mean that in a pejorative way. It's just a fact that we all each care first and foremost for ourselves, our families; our own concerns. When we understand that distinction, we can see that, in fact, environmental concerns do matter to the American people. We simply have to frame it that way.

Thus, the top three environmental concerns Americans list they do care about are all about water, whether it be pollution in drinking water, reservoirs or lakes and streams. We all drink water, we swim in those lakes and streams, our children are bathing in it. This is an area the American people can connect to because it concerns them directly.

And while Climate Change doesn't rank high on their issues, in the 2012 Pew Research Center study, Democrats, Republicans and independents all report that "energy" is a concern. That shouldn't surprise us, because energy is something every American uses all the time.

We saw this play out in our own SmartPower research on residential solar which showed that the most compelling reason for people to sign up for solar on their homes isn't the environment. Rather, it's the lowering of their monthly energy bills. That, combined with the increasing "affordability" of solar, is making it an attractive option for many Americans. Indeed, as I've written recently, solar energy has had one of its biggest years ever. And notice that Climate Change had little to do with their purchasing decision. In other words, it was their own personal financial interests that got them to pull the trigger. As we say in marketing, it's all about "What's In It For Me."

So the next time we're talking about clean energy issues, let's remember to speak to consumers in the language they care about and frame our arguments in terms they can relate to.

That's what Don Draper would do.

Brian Keane is the president of SmartPower, a non-profit marketing organization funded by private foundations to help build the clean energy marketplace by helping the American public become smarter about their energy use.