"What made Donald Trump mean?"

The question caught me WAY off guard. My son, Riley, is eight -- we were at a play date with friends, and he overheard the adults talking about politics. His question, however innocent, held a deep and powerful inquiry. I wasn't sure how to answer.

"Let's talk about it when we're alone, okay buddy? I want to give you a real answer, and that's going to be hard at a play place."

Honestly... I hoped he would forget. But, like the Little Prince, Riley never forgets a question once it's asked. That evening, during bath time, there it was again.

"What made Donald Trump mean?"

The conversation that ensued was a tough one for me. During these types of interactions, I have several #parentinggoals:

Thus, I focused the conversation on a few main points:

Ask as many questions as possible. If your aim is to build critical thinkers, not mindless followers, start now. In this case, I started by asking Riley what he thought OUR family's values are. "What do we teach you is most important?" He named the usual stuff (being kind, listening for the voice that's not being included, hope, helping others), and was engaged in thoughtful conversation from the beginning. In this way, we were able to avoid a "parent preaching" dynamic, and stay in a "two people in conversation" dynamic.
Describe the situation (in this case Donald Trump) with as little commentary as possible. I focused on the facts: Donald Trump was probably raised to care more about money than people. In our family, we do things a little differently. "How do you think you might turn out if you were taught that money is the most important thing?" Ask open questions that encourage your little one to have empathy for what led someone to a specific decision or mindset.
Use examples from their own life. We went down the Trump Rabbit Hole for a while, and ended up talking about race and racism. As many white people are wont to do, Riley insisted that racism wasn't in his school. So I asked him, with no emotion at all, who the girl in his class was that all the boys "liked." He told me her name, and I asked what color she was. "White," he said. "And who's the boy in your class who gets in the most trouble?" And he told me. I asked what color that boy was. "Black," he said slowly, coming to understand what I meant. I went on to ask him if he could think of a time when he had done the same naughty thing as a black kid, but had gotten in less trouble. He had.
Gently refocus. At times, I can see Riley getting overwhelmed by the awareness of racism and whiteness. He will occasionally veer off into his OWN marginalized identities, asking about gay families and how we are sometimes treated differently, as a way to soothe his tiny white guilt tendencies. I work hard to stay gentle, though sometimes it's hard because I've seen SO MANY other white people do this same dance of avoidance. "Yes, that's true. But there are always some things that will be easier for us because we're white." And then I get us back on track by asking a nice, open-ended question that keeps us on topic.
Get real, and then end empowered. At the end of all of these conversations, I wrap up by reminding Riley that it's awesome to be white. It's awesome to be WHATEVER color you are. And in our particular case, it's great to be white because it means that we have the power to point out injustices when we see them, and if we work really hard and get really good at talking to people about them, we can start to make the world a better place. "It's silly," I tell him, "But sometimes it's easier for people to understand what you're saying if you look like them." I want him to know that racism is real, and to understand that it's not helpful to get stuck wallowing in how shitty it is. Even at age 8, he should feel proud of who he is, and aware of the power that comes with our privilege.
Be open to learning. At one point in this conversation, Riley told me that if Donald Trump's family taught him to value money over anything else, then maybe it wasn't his fault that he was this way. He later asked what I would think about Trump if he changed his mind, and decided to be kinder to people of color and women. Rather than get defensive, I allowed his precious inquiry to sink in. How much fault CAN be placed on people who grow up in capitalism and wealth? When ARE they expected to wake up and see the rest of the world? What IF Trump changed his mind and had a reckoning? Is redemption possible? We cannot have conversations with our kids and expect them to do all the learning. We must challenge ourselves to be changed by them, as we hope they will be changed by us.

To sum things up, here are the main points to keep in mind next time you have a sociopolitical "tough" conversation with your kids: 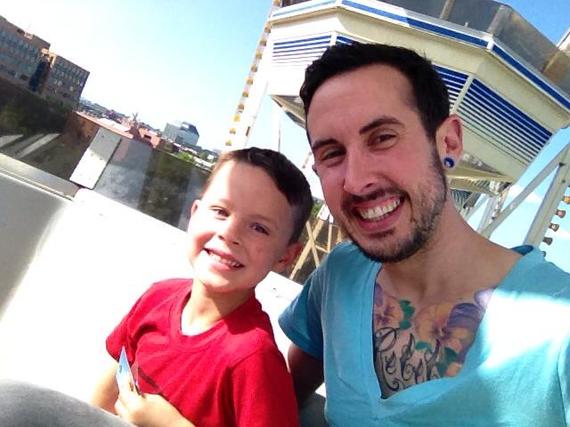 And let me know in the comments how YOU keep your cool and grow awareness in your kid(s)! I'll keep writing and posting about these types of subjects over on my site, Biff and I, or you can follow along on our Facebook page.

More:
racial justiceEducationParenting ParentsDonald Trump
Newsletter Sign Up
Raise the kind of person you'd like to know
Subscribe to our parenting newsletter.
Successfully Subscribed!
Realness delivered to your inbox