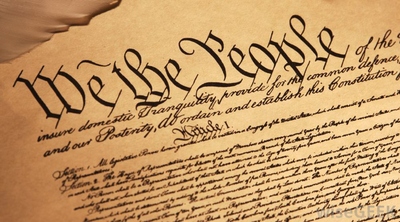 When I listened to President Obama's final State of the Union, I was struck by these two particular but related themes. First, for our Democracy to work, we need people to work together to solve problems and address social issues. We can't all be shouting at each other, calling each other names and refusing to cooperate with those with whom we have disagreements. The President observed that he was disappointed that in seven years in office, he could not bring civility to political discourse. Second, the President spoke to the need to improve voting, both by increasing the number of people who vote and insuring that gerrymandering and money do not diminish these votes. Voting hurdles for vulnerable populations are, sadly, real.

In short, the President was speaking about how we can animate the first three words of our Constitution: We the People...

The following day, by total coincidence, I landed at the newly opened and remarkable Edward M. Kennedy Institute in Boston, located next door to the famed John F. Kennedy Library and Museum. To be candid, until recently, I did not even know it existed. The Institute is the brainchild of now deceased Senator Ted Kennedy and is designed to foster an understanding of our Democracy (particularly through how the Senate functions) and the potential for and importance of engagement in the political process by all people.

A key word for the Institute is "participatory" democracy; it is even in their Mission Statement. And, the same can be said for the President's observations that democracy does not just happen; it requires people to participate by speaking up and out, by engaging in discourse with others, in voting, among other avenues.

The Institute does not just talk the talk in terms of the concept of "participation." It walks the walk. The one story building has an authentic replica of the Senate Chamber, gallery and all. The model Senate is majestic and just being in the room helps remove some of the current cynicism from which many of us suffer based on how the "real" Senate is working. Visitors can participate in simulations there where they hear about legislation and then debate it and actually vote on hand-held devices.

And, when you walk around the building, the walls are interactive, begging for visitors to engage. The various speaker series are all designed to foster engagement too - speakers with different viewpoints are paired together. Complex simulations of legislative process are offered to high school and college students on relevant historical and contemporary issues. Students hear arguments, they read proposed legislation, they caucus, they debate, they compromise, they vote.

Recognizing the many issues surrounding access to voting for vulnerable populations and the importance of the youth vote, the Institute will soon enable those Massachusetts high school students who participate in a program onsite to sign up to be notified of their right to right when they turn 18. Under the able leadership of Jean MacCormack, the Institute is putting meat on the bones of Democracy.

Although certainly not by design as the timing is inverted, the Institute is literally demonstrating the two above noted themes within President Obama's 2016 State of the Union. But here is my takeaway - and it is relevant for both politics and campuses. We need to engage with each other, we need listen to each other, and we need to be able to compromise. The Institute has an upcoming presentation about a new book coauthored by Trent Lott and Tom Daschle (both have been on the Institute's Board) about the breakdown in American politics. It almost strains the imagination to realize that representatives from different sides of the aisle are working together on a book about the need for civil debate and then compromise. That is how Senator Ted Kennedy viewed the political process too, as Trent reminded me recently: we need to work together and have the capacity to compromise. The responses to SOTU suggest we are not operating in that "compromise" space now.

The word "compromise" needs to be unwrapped a bit more fully. We all have values that we hold dear in our personal lives. They guide how we engage with others and how we spend our time and our money. The work-family balance is all about our deeply held values. These values direct, too, how we engage with our communities and reflect oft-times our religions, our ethnicities, and our races. I am not talking about compromising these personal values.

The political compromises suggested by the President and reflected at the Institute and by Trent Lott and Tom Daschle have to do with pragmatism and making Democracy work for all. In that context, we may be and should be willing to bend at the perimeters and perhaps even deeper to enable passage of legislation. Consider this example: we may believe strenuously in the right to bear arms but we can appreciate that guns can get in the wrong hands; so we need to pass laws that circumscribe who can get weapons, what type of weapons and under what circumstances. There has to be a way for compromise on the topic of gun violence.

So, how do we demonstrate the importance of participation -- conversation and compromise -- to Americans, particularly young people who literally hold the future of Democracy in their hands? One way is by modeling the desired behavior in our classrooms, in our homes, in our political debates, in our rhetoric, in our writing, in our use of social media.

On this latter point, we live in a new world where if you shout, the shouting is not just heard by a small audience and then reported upon in a lone newspaper or two. Voices are literally seen and heard and written about in long and short form across the globe. And rest assured, if one misspeaks or speaks offensively, it is not a one-time gaff or indiscretion. It is repeated and repeated, again and again.

In a recent and very good piece, Peter Salovey, the President of Yale, spoke forcefully about how campuses can be places where democratic principles can be fostered; campuses can model civil discourse across controversial topics. He's right and the classroom is one such place within a campus. That is why - howsoever one spins it - the absence of Nicholas and Erika Christakis from the classroom at this moment in time is troubling; it sends the completely wrong message. By not teaching, they lose the opportunity to role model quality engagement for students.

Role modeling civil discourse can and should, but often does not, occur within families. Sadly, I know that all too well from personal experience. The Hallmark family is just that: present on paper and in words but not in reality. More broadly, when I used to teach financial empowerment education, I would ask participants how they talked about money in their family because that is often where we learn our first money lessons. A standard response was: my father yelled and my mother spent. I would chime in: that is not talking about money, that is yelling and acting out about money, and there's a huge difference. And, we could help families improve how they communicate with each other more effectively.

The President is right to ask us to animate our democratic principles by changing how we engage with each other. The Kennedy Institute is, for those who visit and engage, setting an example for how we engage more civilly and how, in so doing, we accomplish more together than we could standing separately.

Now, if only the rest of us could just "get with the program," so to speak. With the election season before us, one surefire way to get some traction here would be for all of us to speak up and out and against about candidates who are not engaging civilly, calling them out for their incivility and praising those candidates, whether or not we agree wit their substantive views, who role model the best parts of our Democracy - civil discourse on difficult issues.

That doesn't seem like too much to ask - participate and message the importance of civil discourse and compromise.