On Wednesday, I sat on the A train on my way from Queens to Manhattan. Across from me sat a young mother with her baby boy. Both of them were laughing and clapping along with a Muslim Uzbek woman who had arrived late the night before, setting foot in the West for the very first time.

They spoke not a word in common -- this young American Black mother and her son, and this 60-something Uzbek lady -- but their connection was instantaneous. The boy, Levi, one day shy of his first birthday, smiled broadly at the Uzbek woman when we first sat down. And within less than a minute, she had crossed over to sit next to him.

Later, on the same long train to Manhattan, this Uzbek woman struck up a language-less conversation with another woman. This time the subject was a tiny dog that the woman had inside a mesh carrying bag. The dog wore a rhinestone collar. It was produced from the bag and proudly shown. Smiles were exchanged.

This trend would continue throughout a thoroughly tourist day in New York: Uzbek woman meets stranger, and laughter, photos and smiles ensue. Heads are shaken in happy disbelief that strangers could become friends so quickly.

But I'm getting ahead of myself.

I needed ... to see this place and these people with fresh eyes. I needed this woman to fly across the world and look at my home and tell me what she saw.

In the year 2000, I joined the United States Peace Corps and was sent to serve in the former Soviet Republic of Uzbekistan. Picture a map of the world in your mind; the part you have a hard time filling in is likely Central Asia, where Uzbekistan sits, surrounded by 'stans. I was sent to a small town in the far east of the country, to teach English in a primary school. I was assigned a family to live with. And there, in that home on the other side of the world, I met my second mother.

Mahsuma opa, I was supposed to call her, out of respect, but within a month I was calling her "Mam," just like her Russian-speaking children. She bulldozed me through Uzbekistan, introducing me to anyone and everyone, shoving interesting food and drinks in front of me, pinching my bottom as I walked by and making me dance in the courtyard of our home whenever mail arrived from the USA.

Once, inexplicably, she removed me from teaching in the middle of the day and drove me to a farm out in the country. There we met the farmer, and watched him artificially inseminate a cow. "This is interesting," I ventured in the mix of Russian and Uzbek I was learning. "But why are we here?" She told me -- solemnly, but unable to completely hide the glint in her eye -- that the sperm had come from an American bull. So, obviously, I needed to see it.

"If only you had been my daughter that I gave birth to!" she would sometimes exclaim out of nowhere. "Then I would have given you my breast and fed you my milk." Then peals of cackling laughter and gestures one would not have expected from an Uzbek woman. Then a smack across the upper arm and a shout of "I will kill you! I will eat you! I love you so much!"

And then 9/11 happened. The in-country Peace Corps officer called the house and told me I had 48 hours to be in the capital, from whence we would be evacuated. But Mam was out of town, and we would not get to say goodbye. My heart shattered. We were sent back to America and summarily dismissed.

A year later I was back -- a whole month's visit funded by Spartan living conditions on my non-profit salary back in America. And then, gone again.

Fourteen years passed. Years peppered with phone calls when I could get through, with poorly written letters in my ever-declining Ruzbek mix. Once, I almost made it back, but was denied a visa to go back and visit. More tears.

And then, suddenly, she decides it is time to come and see her long-lost daughter. A visa is procured, ticket purchased, and I fly to JFK to meet her in the middle of the night. We sleep in a crappy airport hotel and in the morning, we take that A train from Queens to Manhattan, to spend the day in a city she had seen in countless films, heard about in countless pop songs. We ride an open-top tourist bus. We eat pizza. We shop. We walk the High Line. And everywhere: smiles, laughter, high fives, photos, Mam shouting the dozen or so English words she knows: "Friend!" "Very good!" "Beautiful!"

At the day's end, hot, tired and happy, I ask Mam to tell me the best part of the day. She'd seen the Statue of Liberty, been up to the 31st floor of the Viacom building in Times Square to see the panorama of the city. So many sights and sounds and smells and experiences in one day.

The best part? she says. That's easy. The people. That baby on the train. When your metro card wouldn't work on the subway, that stranger swiped his to let you in. That Uber driver, Sasha -- who knew we would get an Uber driver born in Uzbekistan? The lady who was letting strangers pet her tiny dog. The Korean War veterans in Battery Park. The hotel shuttle driver who let me take a picture with him. Your cousin. Your mom. The people here are so open. They talk to each other. If you ask them to help you, they help. If you smile at them, they smile back.

I drink in her vision of America like cold, clear water on a hot day. ... We are what makes America great. Not again, but still.

"You know, Mam," I say, "Some people think New Yorkers are rude."

"Not possible!" she shouts, and smacks me across the upper arm. "These people are so kind! And it's amazing: they're all different. So many colors, so many languages! But I have two ears and one nose -- see? And so do they. It turns out there is no difference at all. Americans are wonderful."

Hear this with me. Hear it on this week, at this time, with this fearmongering and name-calling and dog whistling, with these attacks and deaths and grievances and inequities, with fear stalking the land and a major party presidential candidate making a mockery of community, of unity, of the melting pot and the lifted lamp for huddled masses yearning to breathe free.

I needed to hear this, to see this place and these people with fresh eyes. I needed this woman to fly across the world and look at my home and tell me what she saw.

I drink in her vision of America like cold, clear water on a hot day. It rings inside me like a bell, like muscle memory. This is who we are. This -- with all of our faults -- is who we've always been when we're at our best. We are the woman on the A train, handing her baby to a loud and completely foreign stranger. We are the strangers who shout "Welcome! Welcome!" when they are told that today is this lady's first day in America.

We are the stranger's swipe of the metro card, accompanied by a silent smile. We are connection, laughter. We are two ears and one nose each. We are messy joy and love and openness and kindness to a stranger in our strange land. We are what makes America great. Not again, but still. 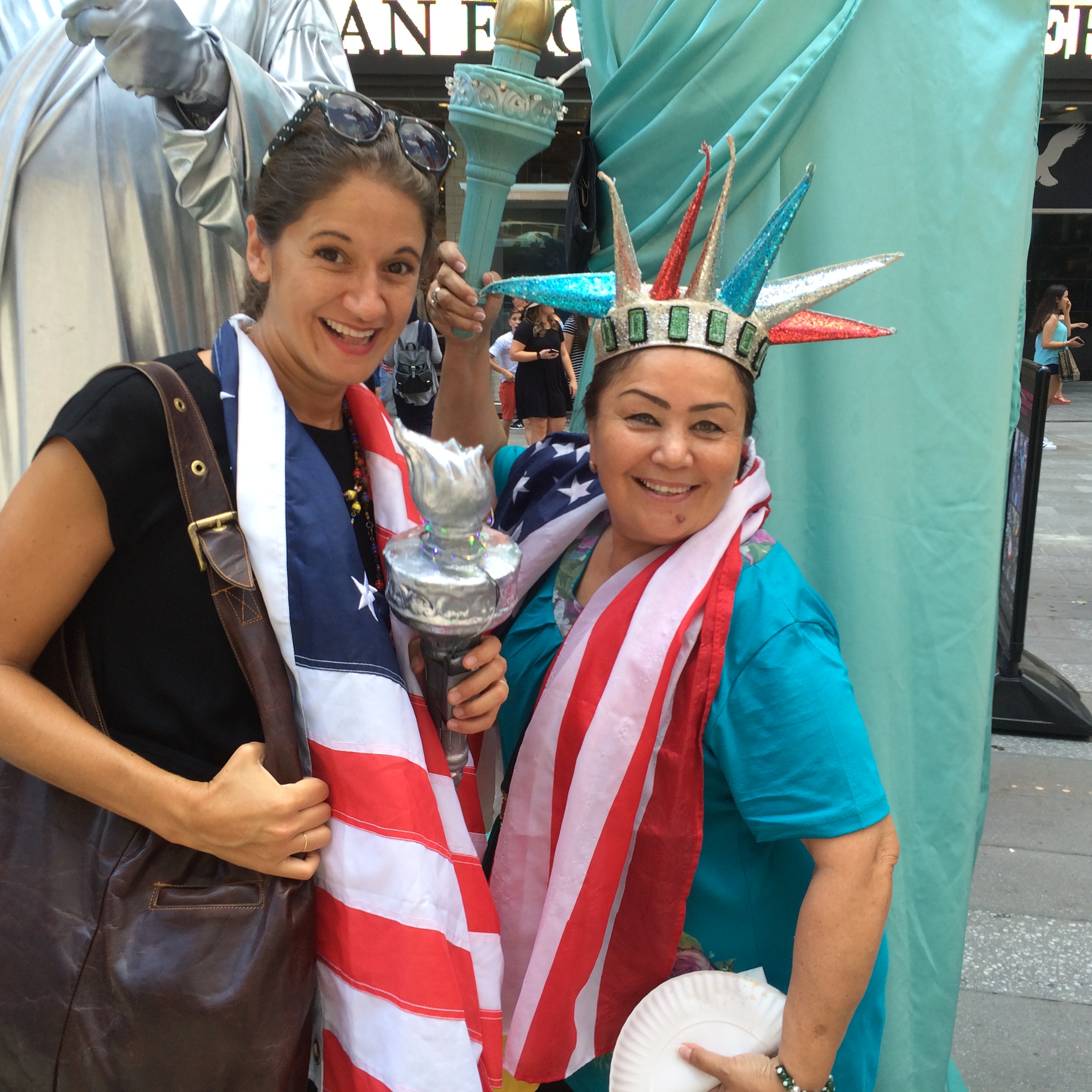