Although our bodies have specific sensory receptors for color and flavor, we have none for texture. It is our teeth and jaw muscles that tell us about texture, via the type and extent of effort they must exert. Presented with something sticky, our teeth and jaws tell us that this substance is highly concentrated, extremely dense: thus either delicious or nutritious or both. 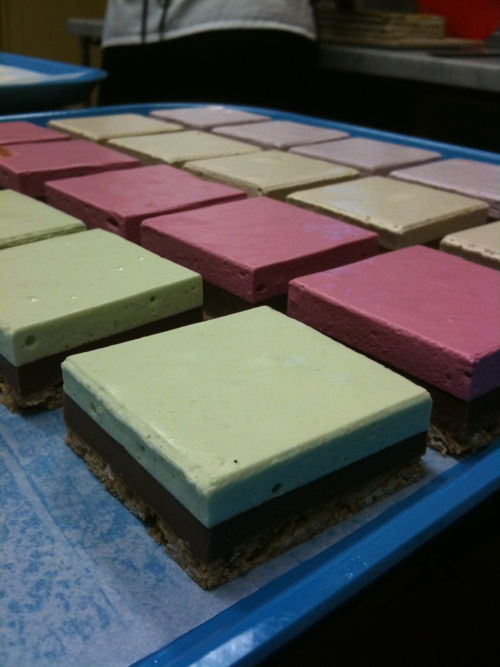 Depicted above (albeit before their final coup-de-grace torching) are basil-, beet-, porcini- and rooibos-flavored s'mores -- those ingredients go right into the marshmallow -- created by award-winning pastry chef Bill Corbett of San Francisco's Absinthe Brasserie & Bar. An alumnus of New York City's Dona and Anthos and San Francisco's Coi and Michael Mina, Corbett loves the stickiness of s'mores and wanted to give his adult customers another chance to savor this campfire classic.

Sampling a wide range of ice creams recently, I liked Fiorello's and McConnell's best -- expressly because both brands are exquisitely sticky. Containers of McConnell's peppermint-stick flavor -- available at the historic company's Southern California stores and nationwide via mail-order -- temptingly proclaim it "the schtickiest."

"Schtickiness should invade the mouth so that you taste the flavor all across your palate, like with wine," Palmer explained. "The flavor itself should be sticky: There's an attack, then you get the mid-palate, and then there's a finish.

While most commercial ice creams are about 30 percent air, the French pot method allows Palmer to add absolutely no air and impressively large quantities of butterfat: over 18 percent in some flavors. 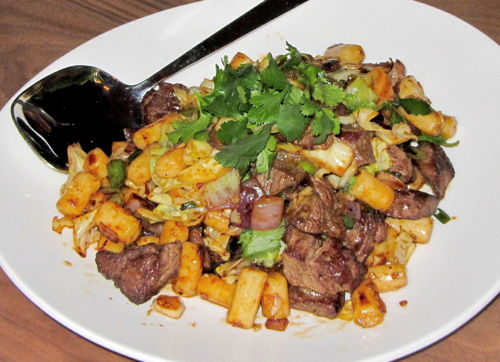 Depicted above are the topokki I was served last night at E&O Asian Kitchen in San Francisco. Topokki -- aka dduk, tteok and ddeokbokki -- are sticky white earplug-shaped Korean pasta made from glutinous rice. They require an immense amount of chewing -- which, as is true for all delicious sticky things, expands the length of time in which you get to relish each mouthful.

Sticky foods are arguably better-loved in Asia than the West. Topokki -- which also comes in other shapes -- are hugely popular, as is Japanese natto. Recent studies suggest that natto can stave off osteoporosis, but that's not why these overpoweringly sticky, slimy, stringy, foul-smelling fermented soybeans have been a wildly popular Japanese staple for thousands of years. It's their stickiness -- which (via teeth and jaws) convey their high-protein, fermented intensity. Japanese mochi are another prime example: These glorious rice cakes take forever to make and (thankfully) almost forever to eat.

Stickiness and rice are so intertwined in Japanese culture and psychology that the Japanese character (kanji) meaning "sticky" includes an essential set of strokes (aka a radical) meaning "rice."

Eve Kushner, who celebrates the Japanese language at Joy O' Kanji, told me that the the kanji meaning "sticky" intriguingly "lends its stickiness to all kinds of inedible items" -- that is, it's part of the Japanese words for clay, papier-maché, mucous membrane and adhesive tape. The "rice" radical is embedded in the written Japanese words for all of these.

"It's interesting that all the stickiness stems from a grain," Kushner said.