We see article after article about what women want in a relationship. What about what men want?

It's as if we have been catalogued and written off as a basic 8th grade science project, given a footnote reading: Driven by sex, motivated by sex, works for sex and spends most of its time thinking about sex -- nothing else notable observed. Then we are relegated to an old, dusty shelf in a basement next to a book about amoeba. Yes, the footnote reads true, we like sex, but there is a little more to us...

Women make the same mistakes in relationships with men over and over again because they have not properly studied us, which is just bloody lazy if you think about it. I have spent my entire life studying women and trying to understand them, as have many men. I find them wonderfully fascinating. So why don't women endeavor to use their "emotional intelligence" to understand the deeper meaning of male behavior? Yes, men are emotional creatures as well; do we not warrant some clever thought from our female counterparts?

There are a few exceptions; some women have mastered what men really want and for the most part are happily married, on their way to being or nicely in control of their relationships. To that, I say, "Great, you're more in tune than 99 percent of your gender."

Men are not overly complicated -- certainly we are simpler than our fairer sex, but we do warrant some conscious thought, ladies. Instead of writing men off as assholes, bastards, and douchebags at the first sign of untoward behavior, you should perhaps work harder at understanding us.

Failing to do so leads women to end up alone and bitter or unhappily not alone and it can be ruinous to men.

Often what women fall in love with in men becomes the very thing they fear and wish to tame. I have seen it happen; it's a sad sight watching a friend crumble like Humpty Dumpty. A woman falls in love with a confident man, then becomes threatened by that very same confidence. She feels flung out on stormy seas, so she begins to slowly and methodically cut him down to a manageable size in order to gain control and find her way back to a "safe" port. Bright, funny, successful, socially competent men become meek, apologetic, ruined boys, shells of their former selves. They become doormats. Of course, once he has become a manageable doormat, the woman will no doubt leave him for another man -- the type of man he used to be. No woman wants a weak man for any period of time. Or a happier ending: He escapes the witch and finds a woman who makes him feel good. Either way, it's a lose-lose scenario.

Don't get me wrong -- taking men down a peg or two is necessary on occasion; my wife has needed to do just that over the years, and she does it very well. But remember the stop button, ladies -- cutting us off at the knees is not helpful to you. You don't want to break us; if we are broken, we don't work.

You must empower us to fully devote to you and here's how you do it.

One word: HERO. It's that simple. Men want to be heroes. Men project that need and desire onto women in order for them to live out their hero fantasies. Certainly, as men, we all go about it in different ways -- we are all very different people -- but we share this one unquenchable desire. Let your man be a hero every now and then, even if he is not feeling that heroic, even if you have to act. Remember, it's that fleeting expression, that look of trust and admiration, that passing gesture, those few words that make us feel like your heroes.

So much is satisfied in men if you empower them to feel like heroes. You will reap the benefits.

Take the marriage proposal, for example; do women know what it means to men? If women actually knew what excited men about a marriage proposal, they would not so readily pressure men into proposing. Pressure backfires. Be clever, ladies. As silly or chauvinistic as it may sound to you, it's our chance to be a hero. To sweep in on our white steed, fight off and slay the fire-breathing dragons and save you. It may seem silly and childish, but all men have a little Peter Pan in us, or maybe better put, a little Don Quixote -- so why not let us enjoy it? Once a man feels pressure to propose, he is no longer a hero, he is an anti-hero. He does not act on his own valiant free will to save the damsel in distress, he is the stable hand ordered to build a stable from straw. We dream about being your heroes, so let us.

I acknowledge we can be a little dim and do need subtle cues to let us know the timing is right, but does it really hurt to let us believe it was our idea?

Men want to be heroes -- that is the fundamental, overarching premise to remember. If you keep that in mind, you are halfway to being in a successful relationship. Romance begins when two fairy tales collide when we surrender to the fantasy our partner has of us and it matches our idealized version of ourselves.

Do men really believe that clever Cinderella "accidentally" left her glass slipper on the night of the ball? Oh please... it was strategically left as a calling card for the prince. Was Sleeping Beauty really asleep? Hell no, that wench was pretending! But they both won their princes. Why? Because they made them feel like heroes. We don't burst your bubble, so don't burst ours. 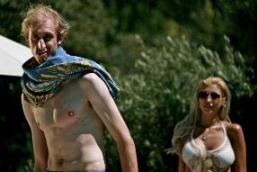