Picture this. You're pregnant and excited to give birth to your first child after suffering from two miscarriages. You can't wait to hold your baby in your arms and get to know this new little person. Your job doesn't provide paid maternity leave so you've stocked up on vacation days and managed to accrue three weeks. You can only really afford an additional three weeks of unpaid time off so you hope that six weeks will be enough time to heal, bond with your baby and establish new routines.

Six weeks arrives much faster than you expected. You're not ready to go back; you're scared to leave your little boy. You spend days crying and agonizing over what to do and finally decide to take another two weeks off unpaid even though you can't afford it. You miss a mortgage payment. Then you head back to work after eight weeks, emotionally torn because you still want more time at home.

Flash forward two years. You find yourself wishing for a second child because it's your dream to have two children. You want your son to have a sibling. But you can't afford to take unpaid time off and saving money for maternity leave has been too difficult because times are tough. You mentally debate all the time about whether you should just go for it or not have another child because you can't afford unpaid maternity leave. You decide to throw caution to the wind because you don't want to let finances have the final say in adding another child to your family. And you're not getting any younger.

You get pregnant for the second time. Two weeks before you give birth the doctor says you need to be on bed rest for high blood pressure so your unpaid maternity leave starts sooner than you anticipated and now you only have six weeks with your new baby instead of the eight weeks you anticipated. What do you do? Take an additional two weeks of unpaid time and suffer financially, or go back to work even though you aren't emotionally ready?

This is the true story of a woman named Keri from Connecticut. Keri's story is shared by far too many new mothers who end up going back to work without enough time to recover from birth and bond with their beautiful new baby. Many women are delaying getting pregnant, sometimes for years, because they just can't afford to take unpaid maternity leave. Additionally, there are far too many women who aren't even eligible for unpaid time off and lose their jobs or go back to work within a very short period of time.

As Mother's Day approaches this weekend, let's keep women like Keri in mind. New moms deeply cherish the time they have with their newborns and should not have to worry about paying their bills while out on leave. They should not be forced back to work too soon. They should not have to delay pregnancy for years or make the difficult decision to not have children because they can't afford time away from their jobs. As a country that purports to care about family values, shouldn't providing paid maternity leave be a no-brainer?

Fortunately for Keri there are efforts underway in her state of Connecticut to enact a system of paid family and medical leave so that no new mother has to face the difficult decisions she did. The best thing we can do for moms is to support family-friendly policies and ensure that they have an adequate amount of paid time off after giving birth or adopting a child. So forget about that bouquet of flowers that only lasts a week. Let's give moms something that sets their family up for long-term success -- access to paid maternity leave.

Michelle Noehren is the Events and Special Projects Director at the Connecticut Permanent Commission on the Status of Women. For more information about paid family leave efforts in her state visit PaidFamilyLeaveCT.org. 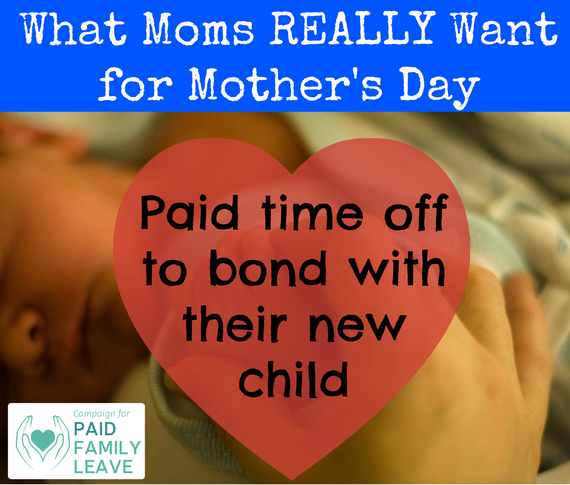