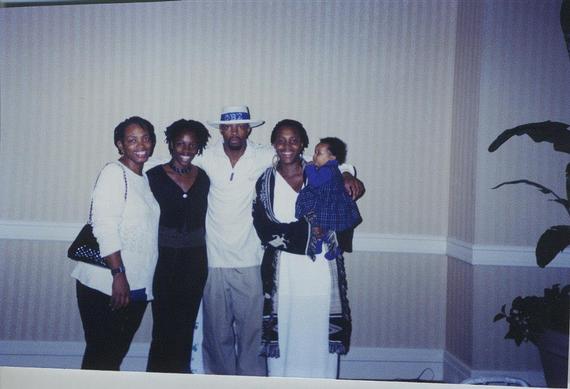 I have three siblings, all female, all of whom are my dearest friends. We are relatively close in age with eight years separating the oldest sibling from the youngest. Through them, I learned the importance of cooperation, compromise and unity. But I also learned about masculinity and manhood. In appreciation of three women who have touched my life in immeasurable ways, here are nine ways my sisters taught me the true meaning of masculinity.

"Never give somebody a fake rose! Just don't be fake, period!" My sister left me with this feedback after coming home from a date in which the guy did not impress. To be clear, her major beef was not merely about the lack of living flowers; it was the lack of sincerity her date exhibited throughout their evening. Apparently he had watched too many movies from the 1950s and decided to manifest his learning during their evening. Her advice simultaneously stressed the importance of authenticity while challenging representations found in Hollywood's male-dominated, misogynistic bastardization of love.

I neglected to tell her that I had already bought into cinematic portrayals of dating and delivered a plastic plant (the first and last time I would do so).

Growing up, we all had the same chores, so on the odd occasion when we were prescribed responsibilities consistent with traditional gender roles, we often shot each other looks of confusion. It was not hard to intellectually figure out that tasks were being assigned based on gender, but there was this mutual sense of its ridiculousness. Acknowledging to each other that such a distinction made no sense was our way of confronting gender stereotypes.

I am a Kanye West fan -- I love the way he integrates everyday issues with systemic dynamics. He also takes chances and expresses viewpoints often frowned upon in mainstream music. Nowhere is this more apparent than his now 13-year-old song "Jesus Walks," which starts: "We at war with terrorism, racism, and most of all, we at war with ourselves." In voicing her ambivalence for the hit song, I recall my sister saying: "It's OK, but how come he didn't mention sexism in his intro?" My sister was not merely confronting Kanye or hip-hop music; she was calling out my sexism. How could I so readily embrace a song without offering the same critique?

Such confrontations were another sibling gift -- informing me that I too had bought in to traditional masculinity, and reminding me to check my privilege at the door. Patriarchal terrorism has infested the black community and when coupled with the pervasiveness of racism, black women are dealt the worst consequences of American life.

Well before I read books on black feminist thought, I learned about sexism from the stories and experiences of my sisters. I recall listening to their stories of unfair treatment, and harassment based strictly on gender or a combination of gender and race. Also, because we were close enough in age to, at times, attend the same schools, I was a witness to the onslaught of misogyny inflicted upon them and no doubt other females every day. I understand now that we grew up in different worlds even while being raised in the same house. My sisters grew up in a world that devalues, marginalizes and subjugates their gender.

Outside the house, I often felt the restrictiveness of mainstream masculinity directing my interactions and activities. My worth was never determined by my level of aggression, athletic skill, or monetary success. As a child, it did not matter if I played with dolls, participated in sibling-only singing or dancing contests, my masculinity was never on trial with my sisters.

In a previous article, I talked about promoting a progressive masculine agenda through reclamation of the term "sensitive." Through embracing being a sensitive black man as a core part of any masculine identity, traditional images of the emotionally stoic, controlling, narcissistic one-dimensional male identity is obsolete. This agenda is similar to Mark Anthony Neal's conceptualization of being a New Black Man, which he describes as "resisting being inscribed by a wide range of forces and finding a comfort with a complex and progressive existence as a black man in America."

My sisters often made me the recipient of their wisecracks. I'll spare you examples of the practical jokes we played on each other. There were, of course, times when feelings were hurt and apologies were in order. But still, I learned not to take myself too seriously and how humor can build connection.

I am the only male of four siblings and second in the birth order. Not being the oldest meant leadership often fell to my older sister. However, her style of leading was not domineering or autocratic. She led by cooperation more than delegation. When it came to making a decision that would impact the rest of us, she was democratic in her decision-making. Even as an adult I can see this style of leadership in my own methods. Needless to say, this approach is in direct contradiction to the hierarchical, controlling style preached by patriarchal socialization.

I Am Because We Are

Even at the height of our worst disputes, should any sibling encounter adversity, the others would tenaciously surround the individual in an ironclad wall of protection and support. An important part of my identity is the promotion of collectivism: I am because we are, because we are I am. I exist to promote the general welfare of the family, and in doing so, I too am uplifted.

Don't get it twisted, as children we ticked each other off, yelled, made fun, and at times stayed the hell away from each other. But these moods were never long lasting, as warmth and understanding soon filled the space. I admit I was the slowest to convey love to my siblings after perceived wrongs. Despite my stubbornness, they never wavered in their willingness to forgive me. I have no doubt that my willingness to be compassionate, and convey warmth and tenderness is in large part because of my sisters. I believe that empathy and forgiveness are among the most important human displays of compassion often missing from mainstream definitions of manhood.

From my sisters, I have learned lessons in the importance of standing up for myself and others, in sharing and cooperation, in being humble and never being afraid to apologize or admit when I am wrong. They have taught me to be fearless in taking risks and rising each time I fall. My sisters have instilled confidence, creativity, insight and boldness in me by manifesting such behaviors within themselves. They are the first to unapologetically inspire me to be better and equally as expeditious in accepting my individuality.

To my sisters, I love you all. No gift you have given me will ever be forgotten.

This originally appeared on Rolereboot.org. Republished here with permission.