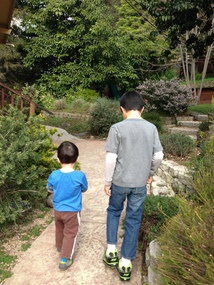 When I was pregnant with my third child I asked my two older kids if they were hoping for a little brother or a little sister. At that time, my son was six and my daughter was three. They turned to each other to confer for a moment and then burst out giggling. "We want a transgender baby!" I was surprised for a moment, then laughed. "Oh really?" I asked, "Why is that?" Grinning, my son said, "Well, we already have a boy and a girl, now we need a transgender baby so we can have each kind." I can honestly say that I didn't see this coming. But I should have. My children had an awareness and acknowledgment of the gender spectrum at their very young ages that many adults don't have. Their dad was in the midst of medically transitioning, they had transgender stuffed animals, and my daughter's best friend at preschool was gender variant.

Many years ago, as a women's studies undergraduate, I took classes that looked at feminism, but never one that directly looked at the gender spectrum. I remember a professor passionately stating, "Biology is not destiny!" I understood that to mean that women could be anything they wanted. That gender is a social construct that we are spoon fed until we think it's our own identity. I took away the idea that a baby is born a blank slate, and that left to its own devices, away from the influence of socialization, it would become some kind of androgynous equal opportunity self-assured peace loving co-creator of the universe.

When I became pregnant with my first child, I had those ideals in mind when I bought gender-neutral clothing and toys in preparation for my baby's arrival. When I learned I was having a boy, I decided the blank slate idea applied to boys as well as girls. I would raise my son to know that he could be anything he wanted to be, or more truthfully, that I wanted. I wanted to raise a son that eschewed toy guns, rough play, or anything that smacked of patriarchy. It's kind of sweet how naïve I was. His favorite onesie as a baby had a big dump truck on it. By eight months old, he was obsessed with trucks and would crawl from anywhere in the house at full speed to see the garbage truck pick up our trash cans each week. By preschool he could turn a stick or Legos into a gun, and my pacifist heart gasped. I wondered how this could have happened when I'd been so careful to shield him from violence, or even the word "gun." I wondered how a kid so little could have such a clear affinity for things so traditionally "masculine."

By the time my daughter was born, I'd decided that perhaps some gender traits do come with biological sex. I released myself from the gender-neutral rules and bought her some cute girl things, letting myself reminisce about my own girlhood, imaging she might like the same things I did. Again, I was wrong. She was disinterested in dresses, wouldn't let me put her hair in ponytails, and liked nothing better than her brother's toys. She loved wearing his hand-me-downs, and I wondered where her gender would take her. I was surprised when she eventually started asking for cheetah print tutu skirts with sparkly pink waistbands and hula hoops. And I am now grateful when she says, "Mama, you know, I don't really like princesses. They don't really do anything."

So when this third baby, born in the year of the dragon, came along, I knew that gender expression was not something I could predict. The twenty-week ultrasound said male, but I decided to just follow his lead. He was sweet and cuddly from the moment of his birth. As he grew, he liked pink, and anything that belonged to his sister. For many months he insisted on wearing a hand-me-down Halloween-themed Dora the Explorer shirt. He didn't want his hair cut ever. He wanted it long, like his sister's. So he had long hair, wore girls' shirts and Hello Kitty socks. But he also was a little bruiser. He's willing to stand up to any of us, and his fighting spirit delights me.

But in the back of my mind, I never forgot his siblings wish that he be transgender. What if he is transgender, I'd think to myself. What if I call him my boy, but inside that feels vaguely wrong to him? Just in case, I avoided too many overt masculinizing terms. I wondered if I was being overly cautious, but my goal was simply to not make assumptions anymore. With my oldest, I assumed if I kept him in a gender-sterile environment that he'd turn into some egalitarian utopian version of a man. But he can be a good man and express his masculinity however he likes. With my daughter I assumed I could indulge my love of all things girlie. I was wrong. She creates her own version of womanhood every day. With my third I wanted to be quiet. I wanted to listen to him and see what he could teach me.

I had my youngest with me at the supermarket a few weeks ago. He's two and a half now. His hair had grown shoulder-length and framed his cherubic cheeks and big brown eyes. He's let go of the Dora the Explorer shirt and moved on to his new love: a Paw Patrol t-shirt. This day, like most days, he chose to wear the Paw Patrol shirt and some "big kid" jeans. As we made our way through the store three different people referred to him as my daughter. They were momentary interactions with strangers. Each time, I didn't correct them, but instead I looked at him, his eyes, to see. How did he react to being referred to as a girl?

What I saw, for the first time, was an expression of discontent. And I wondered if I was failing him. Perhaps I should have corrected the strangers. After we went home, and I put away the groceries, I asked him, "Hey, do you want a haircut?" and he said yes. I asked him did he want a long hair cut like his sister's or a short haircut like his brothers. He said he wanted it short like his brother's. After the haircut, he looked like such a big boy, no longer my little cherubic baby.

The other night he pulled his arms through the neck hole of his Paw Patrol shirt and pushed the neck hole down around his waist. "Look Mama!" he said. "Paw Patrol skirt!" He laughed. I laughed too. I'm pretty sure he's a boy, but he's a boy not afraid to wear a skirt. And I'm going to keep on letting him choose, because he knows himself best.