Many times, I've been asked why bad things happen to good people. 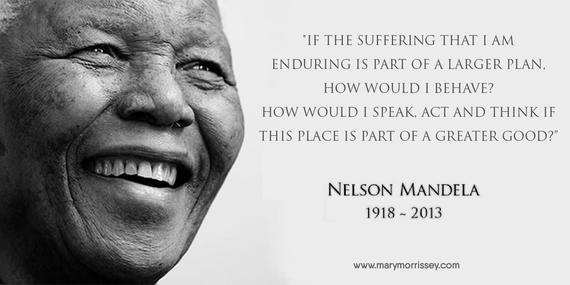 What purpose does pain and suffering serve... and does it come into our lives because we deserve it on some level?

Whatever form the question takes, the answer is nearly always the same:

Not one of us deserves to suffer, but suffering can be a doorway that allows us to step into a fuller, freer, more expansive version of ourselves.

Keep reading to discover how an extraordinary man overcame incredible odds, and changed not only his own life, but that of an entire nation -- and how you can apply his transformational principles to start finding purpose and create a life you truly love living.

After several decades of helping others as a life coach, speaker, and author -- and after even being blessed to co-convene three week-long meetings with His Holiness the Dalai Lama -- I had the opportunity to fulfill one of my greatest life goals... to meet with the legendary South African president, Nelson Mandela. I'd been dreaming about this for years...

Nelson Rolihlahla Mandela was born in South Africa in 1918, and was instrumental in the fight to dismantle the country's discriminatory apartheid policies.

Because of his vocal protests for justice and equality in the face of an apartheid-led government, he was imprisoned for 27 years, from 1962 until 1990, for what his government deemed to be crimes against his country -- a country he would later lead, as president, from 1994 to 1999.

After his term as president, Mr. Mandela continued to work as an activist and philanthropist until his death in December of 2013.

He's widely recognized as one of the greatest change agents of our time.

Out of all the people in the world that I wanted to sit down and talk with, he was the one with whom I MOST wanted to have a conversation, and I was overjoyed to have the chance to finally meet him face-to-face.

In 2001, I was invited to travel to South Africa as part of a small group to meet with Mr. Mandela

It was a fascinating experience! We were asked not to use any kind of flash photography to capture the moment, because Mr. Mandela's eyes were so damaged from his years of working in the blinding sun, that he couldn't tolerate even the brief flare of the camera's bulb.

We were, however, allowed to ask him questions. I had just one thing I wanted to know:

"How is it that you were imprisoned for almost three decades, and sentenced to hard labor, and there's not a shred of anger or resentment in you for all of that time you lost, all of those years that you could have been with your family, that were stolen from you? And then you went on to not just forgive your captors, but to go on to lead your country in the fight against apartheid? How did you do it? How did you find it in your heart to forgive?"

In response to my question, Mr. Mandela gave me a simple answer: "The man who went to prison never could have become president."

At first, I was a bit confused by his answer... But he went on to explain that, in his younger years, he was violent, angry, and unable to make sense of his circumstances and conditions.

He protested and fought against apartheid, and was arrested for it, and sentenced to life in prison.

He told me that, at first, sitting in prison, he thought over and over again, "All is lost.

But then one day, a new thought began to seep into his consciousness, like a drop of water on parched earth: "Maybe all is NOT lost."

He had no reason to hope that life would get better. He was in prison with no hope of release in his lifetime. And yet, that tiny bit of hope remained, and he told me that he hung onto it, "like a desperate person hanging onto a branch before he plummets off a cliff to his death."

For many years, nothing happened to justify this hope. But one day, Mr. Mandela had a new thought...

"Maybe my being here is part of the beginning of the end of apartheid." Mr. Mandela slowly began to realize that there might be a larger purpose to his imprisonment.

As he started to think about this, he began to wonder: "If my imprisonment was part of the end of apartheid, how will I 'be' while I am in this prison?"

He chose to start becoming the person who could fulfill his vision to end apartheid, a strong and compassionate leader, and this is what led him to begin writing letters that would go on to change the world.

He was allowed to send one letter per week from prison, and he used this method of communication to garner support for the end of apartheid.

Each and every week, Mandela wrote faithfully, forgetting his own pain in the light of his growing role as a symbol of hope and freedom for his people.

The rest is history.

This meeting with Mandela changed my life I'd received far more than the joy and happiness of realizing a life-long dream... I'd also discovered the power of the question that Nelson Mandela had asked himself:

"If the suffering that I am enduring is part of a larger plan, how would I behave? How would I speak, act and think if this place is part of a greater good?" Every one of us is called to greatness, and every experience that we have is a part of the process of bringing us into the full expression of that greatness. In every circumstance, we can choose to either shrink down in despair, or to use what resources and opportunities we have -- no matter how small they seem -- to hold true to our values, move toward our dreams, and to act and think like the kind of person we choose and desire to be.

This is Mandela's legacy, and he will always be remembered and cherished for it.

For more proven secrets and step-by-step strategies on how to overcome fear, procrastination and limitations in order to create a life you truly love living, click here to download a FREE copy of my "Stronger Than Circumstances" ebook