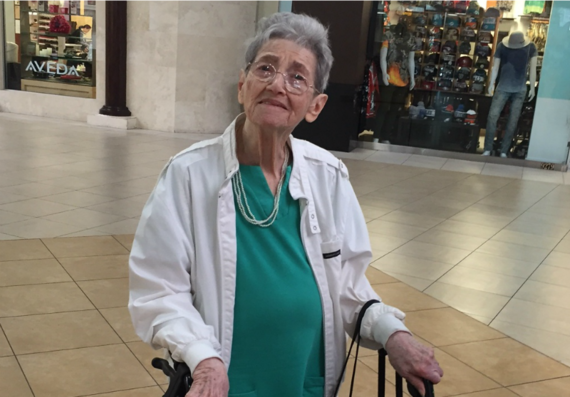 On the last night I ever spent with her, my grandmother showed me her "brag book."

It was a thick photo album, overflowing with cards and letters she had collected over 24 years as an office and archives manager. She had saved everything, from menus for office parties she had planned to notes from supervisors -- including Col. Pomrenze, one of the "Monuments Men" -- praising her accomplishments. As I sat next to her in the kitchen of her Florida apartment, where she still lived alone at age 96, she beamed with pride as she walked me through her career achievements, archived with the same care with which she had organized documents decades ago.

"It's important you have a career you love," my grandmother always told me, her eyes glazing over with fond remembrance.

The years my grandmother had spent working had been a special time in her life. And in some ways, they were rather remarkable.

She had gone to work, rising to manager, before mothers did those things -- before feminism, before the endless blog posts about work/life balance, before anyone encouraged her to "lean in." And she had done this while raising three kids. I often wonder what it was like to be a working mom in the early 1960s. Did guilt mingle with achievement as it does today? Did judgment offset the thrill of forging her own path? Or, in that era before helicopter parenting, when residents of her working-class Bronx neighborhood still remembered the sting of the Depression, and older children walked home from school without anyone calling CPS, did her working merely fall under the umbrella of a "family doing what it had to do"?

Either way, it couldn't have been easy. And yet, my grandmother never talked to me about that. She never discussed the struggle to get dinner on the table after a day's work, or her feelings about hours spent away from home. Instead, she told me stories about coworkers, about office politics, and, mostly, about the high esteem in which she was held. Clearly, in their eyes -- and, more importantly, in hers -- she had been someone. She had forged a separate identity for herself, and that identity empowered her until the end.

I suppose what strikes me most about the way she recalled her work life was that she was utterly unapologetic. When I talk to women today who work outside the home, even the ones who fiercely love their careers, there's often a wistful aside about what they're missing at home. I know I frequently feel guilty when I have to send a work email while my kids are home, or defensive when telling people that my toddler goes to daycare in the mornings. My grandmother, at least in her storytelling, never felt the need to justify or minimize the passion she felt for her job, or the fulfillment she derived from it. She was proud of her success. She was fueled by it. She was all in.

My grandmother died recently and, now that she's gone, I'm inspired by the lessons she unknowingly passed down to me. She taught me it's okay to love what I do, to identify as a writer as well as a mother and wife. She taught me that I can make room for myself and the things that make me happy, and my family won't fall apart at the seams. She taught me to stop apologizing.

That last night we spent together, reminiscing over her various glories, my grandmother told me a story about her retirement. Her successor had informed her supervisor that she expected to "get the same salary and benefits as Mrs. Pearlman." "Do you really think you're the same as Mrs. Pearlman?" the supervisor had asked. The answer was obvious. There was only one Mrs. Pearlman.

I like to think she's looking down at all of us from heaven, archiving her many achievements.