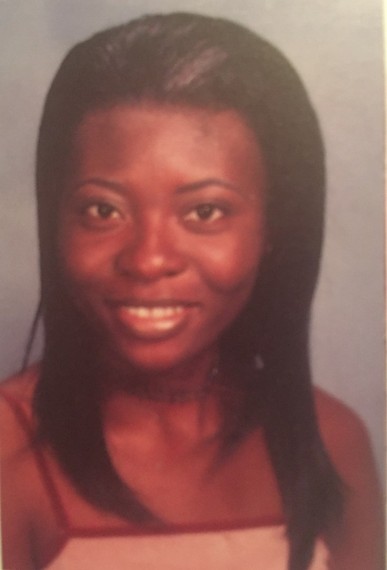 A couple of months ago I met a woman in Manhattan who I photographed for our ongoing Real Beauty Moment photo series. She expressed that one of the things she struggled with as a light-skinned black woman growing up in the South was not being able to have positive interactions or friendships with dark-skinned black women because of the plague of colorism. I was moved by her testimony and inspired to write about my experience as a dark-skinned black woman who once grappled with the issue and its negative impact on my relationship with someone I once called "best friend" during my teenage years. This is my story.

I will never forget the day I received my first copy of Seventeen Magazine, featuring Brandy on the cover. My best friend Candice* and I walked to my house after school like we did everyday. When we stepped onto the porch of my parents' small Miami bungalow, I opened the mailbox, and there she was-my idol, a black girl I adored, on the cover of a major teen publication. By that time my obsession with Brandy was in its beginning stages, so when I saw the magazine, I dropped my tote bag full of books, and screamed.

"What happened'" Candice said startled by my reaction. "Look who's on the cover," I said in disbelief.

"Ugh, are you gay or somethin'?" she asked through a typical Miami drawl. "Why are you acting like that over another girl? Why do you like Brandy anyway?"

By that time we were in 10th grade and had years of friendship under our belt, but I was beginning to form an identity beyond being her best friend. So I ignored what she said and reveled in how important I felt that moment was.

In the mid 90s, mainstream media did very little to promote young black female celebrities (times clearly haven't changed). Brandy was arguably the first to defy those odds with her hit TV show, movie roles, major beauty and fashion endorsements, and multi-platinum albums. Despite her crazy work ethic, her beauty was often questioned. To me she was perfect.

I kept my thoughts about that to myself since Candice couldn't understand why such a presence in the industry was so important to me--a dark skinned girl with a "weird Nigerian name" and foreign parents. I wasn't the typical Miami beauty. Candice on the other hand, fit right into the mold. She was half white and revered by the guys. Her friendly demeanor made her a hit among the girls so she always had friends around her. I was drawn to her because of her personality, but still in the midst of her kindness was an air of privilege. As a friend, I wanted her to reaffirm my beauty. At the very least, I wanted her to understand my pain.

That pain stemmed from issues brought on by colorism and at the time I felt like Miami, my hometown (or the south in general) was the worst place to grow up as a dark skinned girl. Granted everyone has different experiences, but I'm of the belief that being called "black" as a term of endearment by catcallers does something to the average teenage girl's psyche, whether they are aware of it or not. (In fairness being called "red" as a light skinned girl could be equally damaging).

Candice knew she was the object of beauty and she never hesitated to make it known. Her mom was just as eager-like the time she took us to the local Dairy Queen and she noticed the cashier staring at her daughter. "If you think she's pretty, you should see her sister--she has green eyes," her mother said as she pulled out her eldest daughter's senior school photo.

I first met Candice the first day of 5th grade. As we sat in our school's registration office, she smiled and said hello. I was new to the neighborhood and school so it was nice to be acknowledged, especially by someone so sweet and polite. When her mom walked into the office and sat next to her, Candice's long curly hair suddenly made sense to me.

We didn't become close until 6th grade. I'm not sure how it happened, but before I knew it we were spending nights at each other's houses, taking trips to Busch Gardens in Tampa, going roller-skating, and doing all the other things teenagers do. Her mother was always up for an adventure, so she took us everywhere.

But then things changed briefly. In 1993 my parents sent my sister and I to live in Nigeria to attend school there. To this day I have so much appreciation for that time because my self-esteem improved a bit. In Nigeria, my beauty didn't go unnoticed. I was American, and I was interesting. But I also fit in. I didn't have to explain my name to anyone. I was a Nigerian American.

By the time I returned to Miami in 8th grade after just one year in Nigeria, I heard Candice had changed. So when she pulled up to my house with long bedazzled acrylic nails and a fiery red weave stacked on top of her slick brown hair, I was only mildly shocked. It was then I learned that her parents got a divorce. She told me as if it was no big deal, so I never asked how she was coping.

We resumed our usual adventures, but things had changed a bit. At times I felt like a fish out of water. She was allowed to have boyfriends come around. She also had new female friends on heavy rotation. One day she told me she wanted to have a baby soon. She eventually did. At age 15 our conversations went from discussing our identical back-to-school clothes to swollen feet and baby shower plans.

As time went on we began drifting. I found a flock of friends who I could relate to and she transferred to a new school. Years after we graduated from high school, I moved to New York City. We somehow got in touch and spoke over the phone not long after I relocated. "I want to move out of Miami. If you can do it, I should be able to do it," she said with her usual air of privilege.

More years passed and we got in touch again on Facebook. "You finally got a boyfriend," she said laughing as she scrolled through my vacation photos with Kunle, who is now my husband. For a moment I reverted back to that little dark-skinned girl from Miami who didn't know her worth, until I snapped out of it. I realized then that I was still allowing myself to be oppressed by her and the sick notion that dark skin is somehow a curse. It wasn't her responsibility to boost my self-esteem. That was my job. I had to face the realities of colorism in our society and let go of the pain it brought me. I had to figure out how to find beauty in all that I am regardless of the beauty standards that society continues to push.

As I move further into my 30s more comfortable in my skin, I continue to work on shifting my perception of the things that once held my spirit hostage. This growth allowed me to open my mind to the fact that Candice also showed signs of a teenage girl in pain. When she became a mother I never asked her how she was coping. I also never asked about how her parents' divorce affected her. I never understood her pain, just as she never understood mine. We merely existed in each other's worlds once upon a time. Sometimes I wonder if our bond would have lasted if we both made an attempt to empathize with our individual stories. It's the kind of bond that colorism, low self-esteem, and a heightened sense of privilege don't allow. But through our conscious minds, we can break those chains to create real friendships as we move forward.