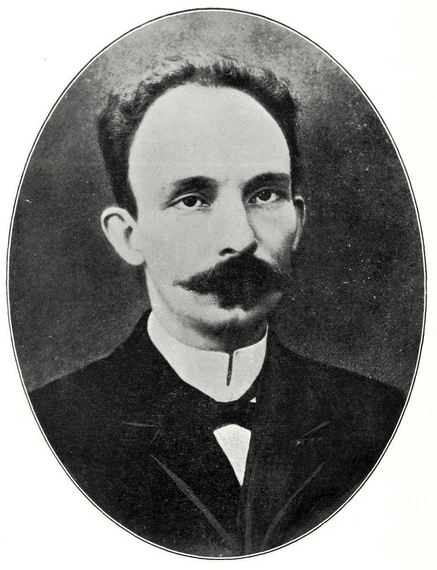 For Cubans and Cuban-Americans, this past summer has been, shall we say, eventful. (Whether you see these events as cause for celebration, condemnation, or deep ambivalence is another matter.) For me, however, the highlight of Summer 2015 was the six weeks I spent in Miami, teaching a course on José Martí at Florida International University. Here at last was the opportunity to bring Martí to the readership I'd envisioned for my recent Marti biography: Third-generation English-dominant Cuban-Americans and other Latina/os and Anglophone Caribbeans, who might have heard of Martí from relatives and word-of-mouth--or politicians--but had not read him.

I expected that the course's focus on Martí's writings on the U.S. and evolving relationship with his adopted country in the late 19th century, and the prominence of U.S.-Cuba relations in the news, would capture my students' interest. But I was more than surprised at the level of engagement and enthusiasm they brought to class from the very first day.

Partly due to the brevity of that summer course, and all the material we covered--Martí's love of North American writers such as Emerson, Whitman, and Helen Hunt Jackson (whose novel Ramona he translated into Spanish), his brilliant Gilded Age journalism, his complex relation with U.S. politics and culture--we never talked about Martí's relationship to them, 20-something men and women in the 21st century. This blog post is my way of trying to compensate for that absence, to share what I never got around to saying in the classroom.

My FIU students--and you millennials reading this--may know what makes Martí intellectually important, academically relevant, and so on. But what you maybe don't quite grasp--what I didn't have time or maybe the skill to give my summer students--is what José Julian Martí y Pérez, a 19th-century writer and revolutionary, might mean to you in 2015. You know, better than your professors do, that it's often the intangible, non-academic stuff that so often "hooks" us on a particular writer--their personal quirks, life experiences, not only the material conditions that produced them and their work but the way that time and place translate into a reader's here and now.

So here's a preliminary and very personal list of what I think you can learn from your old Tío Pepe. In compiling this list, I've stuck to personal qualities and choices that Martí made that seem to translate well into the 21st century. Here goes:

1) It doesn't matter where you come from.
Martí was born into a working-class Cuban household, the son of a Spanish soldier. His mother also hailed from a military family loyal to the Spanish government then colonizing the island. A combination of bad financial decisions, his father's ailing health, and Cuba's own political instability and economic decline plunged the Martís into poverty shortly after his birth in 1853. The family had no history of academic achievement, or of the kind of political activism and organizing that defined their son's life. The odds against someone of Martí's origins and background rising to the forefront of a political movement, or becoming one of the greatest writers and thinkers of his time, were staggering.

No matter what you perceive as your outward limitations--lack of money or opportunity, a difficult family life, geographical remoteness, lack of access to like-minded people or culture--I promise you don't have a bigger hole to climb out of than Martí did. But climb he did. And so can you.

2) Once you find your purpose in life, stick to it.
His obvious intellectual abilities aside--and his brilliance is pretty well undeniable--Martí's greatest asset was arguably his persistence and utter single-mindedness in pursuit of the things that mattered to him. He persevered in the face of obstacles that would destroy most of us: Sentenced to prison and hard labor at 16, he was twice deported from Cuba, the first time before turning 18. Martí spent the next decade as a virtual nomad, living in four different countries on two continents and being expelled or forced out of three of them. He finally settled in New York City in 1881, spending his last 15 years as an exile, in his words "without a country, but without a master." It was from New York, separated from his family and loved ones, that Martí built the revolution that eventually liberated his people from centuries of economic, cultural, and spiritual slavery. He survived years of persecution both political and literal--the reports of Spanish spies and Pinkerton agents assigned to follow his every move fill volumes--and at least one assassination attempt. The decades of stress and adversity wore down what was already a less-than-robust constitution; well before his death at 42, Martí was a physical wreck suffering from a constellation of ailments large and small. None of it stopped him.

More importantly for you, as a young man Martí overcame what was in many ways the most difficult obstacle of all: the disapproval and at times vehement opposition of his family. His loyalist Spanish father was outraged by the teenage Pepe's nascent political activism for a free Cuba. His mother lived in mortal fear (correctly so) that her son's activities would lead him to great suffering. Even the mentor who first inspired and encouraged young Pepe begged him to relent. His work for Cuba later cost him his marriage and relationship with his only son, when his wife, tired of the toils and burdens of the revolutionary life, left New York for good and took their child with her. Through it all, Martí stuck with his inner voice, the political and philosophical compass from which he almost never veered.

Sometimes the people who love you the most and want the best for you--your parents and mentors, your significant other, your best friend--are just wrong. Once you know what's best for you, once you grasp indisputably your path in life and where it may lead, let no one lead you from it.

3) Read. A lot.
Really, this comes down to intellectual curiosity. It's not just about reading books, though Martí did plenty of that--from Shakespeare and Hugo in his youth to Emerson and Whitman, Longfellow and Alcott later on--but about engaging everything, from art to science to sports and everything in between. As the Table of Contents of Martí's Selected Writings amply demonstrates, the sheer breadth of Martí's journalism was staggering; from children's games to amusement parks ("Coney Island"), from political trials and boxing matches to modern art and the Brooklyn Bridge, and the plight of the poor, and high-society balls. He was interested in, and wrote about, just about everything that crossed his path. If Martí were alive today, you better believe he'd be blogging and tweeting and Instagramming, writing about Obama and Raúl Castro but also about Miley Cyrus and A-Rod and Caitlyn Jenner and Super Smash Bros.

Beyond his (not entirely undeserved) image as a dour, somewhat morbid and single-minded person, Martí was a man who loved life, and who embraced the world in all its wonders and horrors. Nothing went over his head, but nothing was beneath his attention either. You should be that way too.

4) Invite others--even your enemies--to share your vision, so it can be their vision too.
In Martí's early years, his single-mindedness got him into a fair amount of trouble (see #2 above). Despite his unswerving dedication to Cuba's liberation, by the time he was a little more than 30 Martí had alienated almost everyone who could help him achieve it. But he soon transformed himself into a master coalition-builder, creating a political and fundraising juggernaut out of what had for decades been a fractious exile community long hindered by backbiting and ideological bickering. He achieved this not by deriding or humiliating his enemies but by using their common goal--the liberation of Cuba--as the ground for a democratic organization in which everyone had a stake and a voice. By the end of his life, Martí had turned lifelong enemies into some of his most loyal and ardent supporters. His genius in articulating a vision of freedom and democracy for Cuba would have come to nothing without his ability to also allow others to see themselves in it and make it their own. As Martí once wrote about the Brooklyn Bridge: "Better to bring cities together than to cleave human chests."

Nothing on this little list is explicitly or narrowly political. Part of that is because the politics and ideological battles of Martí's day were quite different from today's (although the stakes may strike some as being quite similar). But really it's because I believe that Martí is larger and greater than the various ideological boxes into which readers have been trying to stuff him for over a century now, and into which your elders have been trying to get you to stuff him. No matter our individual political leanings, we can all learn from Martí's example, how he lived and what he lived for. We may not all be poets or revolutionaries, but we can all resolve to lead more fulfilling, authentic lives. For the 30 or so students I had the pleasure of teaching this summer, I am hopeful that their time spent with José Martí will help on that journey.

Professor of English and Comparative Literature at Purdue University