During stressful times in my marriage, I have fleeting thoughts about life on the other side. I'm not alone. I see it in my wife's eyes, as well. We will be heading out on a weekend morning, late for one thing or another, a morning that began at 3 a.m. with a kid covered in their own pee, another one cranky from being woken up too early in their shared room, and leaving behind a hot apartment that looks as if it was ransacked by a pack of monkeys. My son will most likely be hanging by one arm as I drag him away from the sink that occupies him for hours, pressing his hand against the faucet and spraying water all over the bathroom. My daughter will be crying because we didn't let her wear a wool long-sleeved dress in the 90 degree heat. And we will look over at our neighbor, Sean, sitting at a table in the sun on the lawn of his apartment building, reading the newspaper, and sipping a hot latte. And Carrie and I will look at each other and think, "That could have been us." We love each other, sure -- but what's love when you're too tired to benefit from it? I tell Carrie, "Even if we're better off divorced, I'm staying in this thing because it's too hard to do it on my own." She nods in agreement.

Last week I sent Carrie packing. I go out of town sans kids every once in awhile, but she never does. It's not like I don't make the offer to watch the kids so she can get a break -- but she has a harder time leaving them than I do. I love those little bastards more than anything else in the world, and yet, offer me a five-day trip to Burning Man, a weekend in New York City, or a day in traffic court without my family, and I'll choose the time off. Carrie finally took me up on my offer, and soon I was left staring at two kids who knew someone else was in charge -- them. I'm kidding, mostly. This isn't a sitcom -- it's real life. And in real life, dads are quite capable of solo parenting without the house burning down. Did they eat as well as when mommy is there? Maybe the meals weren't quite as nutritious, but they thought chocolate cereal was pretty damn awesome for breakfast. And lunch. Did they bathe every day? Who are you, the bathing police?

When things get really hectic, I imagine myself in the middle of a war, fantasizing about a helicopter blazing towards me, a rope ladder dropped just over my head. I grab on with one arm and leave it all behind me. I look back to see my kids wrestling in the stagnant mud pile they found in the park, and I smile because kids and mud are cute when you're not responsible for breaking up the fights or cleaning them up afterwards. 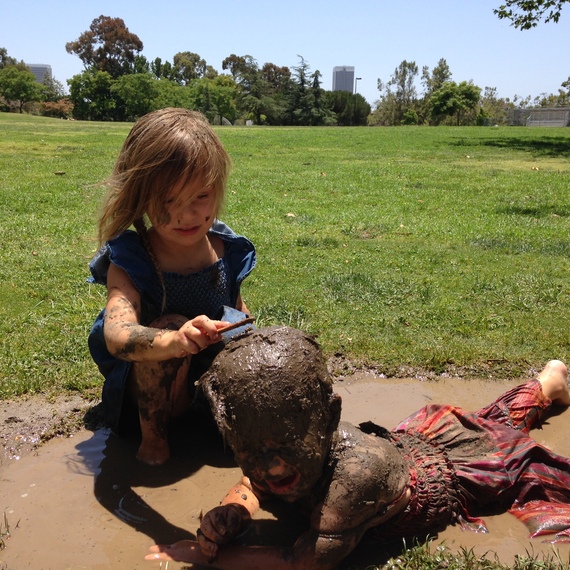 But there's no savior heading my way. I'm on my own. And the chaos hits its crescendo before both fall asleep in the stroller after circling the block ten times. After pulling the heavy beast up two flights of stairs, I enjoy the silence. When they wake up, I'm ready to enjoy them, too. They're calmer, and they're cuddlier, and I realize that I'm having a great time. I made these children that I'm taking turns tossing into the air and catching as they giggle and scream, "Again, daddy! Again!" They're both mine, and not mine. I made them but I watch their happy faces staring down at me and I know that one day it will be time for them to leave -- to college, to travel, to figure out who they are, and to discover their places in the world. And suddenly I miss them. I feel a loss for something that hasn't happened. And even though my arms are getting tired, I keep throwing them in the air and catching them again and again and again.

When Carrie comes back home, rested after a weekend by the pool at a Four Seasons Hotel, she grabs the kids excitedly, and thanks me for giving her the weekend off. "How bad was it?" she asks. "It was great," I say. "Pretty damn great."