A furious panda is a thing to behold.

Ordinarily, a panda seems to be superlatively peaceful, diffidently munching bamboo. But when it gets angry, it betrays its true nature -- it's fundamentally a carnivore trying to play itself off as a herbivore. And failing.

Last week, in Slate, I argued that NASA, like a panda, is maladapted and flirting with extinction as a result. (Panda bashing happens to be a proud Slate tradition.) The argument triggered outrage. Within hours, fueled by social media, the defense of NASA echoed around the nation, even reaching the White House. It was the anger of a panda -- and contrary to what NASA aficionados believe, their response confirms just how screwed-up the agency really is.

The fundamental problem isn't terribly hard to understand. The lion's share of NASA's budget -- and reputation -- is for launching people into space. This was sustainable when we were in a no-holds-barred race with the Soviets, but the moment Neil Armstrong took his first steps on the Moon, that race was over. Any human spaceflight beyond that (including the remaining Apollo missions, which started being scuttled one by one less than a year after the Eagle touched down) is anticlimax. So it will remain until a manned Mars mission becomes technologically and budgetarily feasible.

This left NASA with a dilemma. What NASA does really well -- remote missions -- at best attract some passing attention from the public (and from Congress) and quickly fade from public consciousness, even though they've resulted in fundamental advances in planetary science, astronomy, cosmology, physics, and Earth science. NASA's glory and continued success, on the other hand, comes almost entirely from the hurling-people-in-tin-cans-into-the-void trick, which hasn't had any real purpose since the early 1970s.

In other words, there's a gap between perception and reality, between what NASA does that's really worthwhile and what NASA perceives it must do to maintain its reputation and its budget. The last four decades of NASA's history are an attempt to bridge that gap with sleight of hand, to draw our attention away from that internal contradiction.

It does so by pretending that its astronauts are doing crucial scientific experiments while puttering around in low-Earth orbit. Despite NASA's incessant cooing over its "world-class" scientific work in space, the research on board the shuttle and the International Space Station has almost uniformly been of minimal importance. Science-wise, human spaceflight compares incredibly unfavorably on a dollar-for-dollar basis with even a fiscally bloated and physically crippled unmanned craft. Even a single lean, mean, successful project like Mars Pathfinder, which cost about $200 million (maybe $300 to $350 million in today's dollars), arguably yielded more for science than the entire multi-hundred-billion-dollar post-Apollo human spaceflight program. (Making matters worse, astronaut-run research has not just come at extraordinary fiscal expense but at grave human expense as well. As I point out in the Slate article, NASA has killed roughly 4 percent of the people it has sent into space -- yes, killed, through negligence and mismanagement.)

NASA also has had a few embarrassing episodes where it hyped bad terrestrial science as, well, ham-handed attempts to fill the gap by inflating the importance of a new field: astrobiology. (The term "astrobiology" is telling. "Astro" and "biology" are, at the moment, mutually exclusive; where you have one, you simply don't have the other. Hopefully, that will someday change and give the field a reason for its name.)

This sleight of hand is the core of the problem. Hype doesn't fill the gap between perception and reality, though, and the mismatch is growing bigger each year as remote technology improves, and as budgets tighten. Unless the agency can either find a human spaceflight mission that's worth the effort, expense, and danger or, better yet, realign its priorities so that it no longer has to dissemble about the value of more than half of the work that it does, then NASA is in danger. In short, NASA must figure out what it's really for.

This argument paints an unflattering picture of NASA, to be sure, and the reaction from NASA fans was as quick and fierce as a mother panda defending her cubs. Within a few hours, a NASA love-fest developed on Twitter, using the hashtag #WhatisNASAfor, to try to answer the question -- or at least prove that it's silly and presumptuous to ask it. Space fans, both civilian and insiders, joined in, and soon so did the government, including NASA itself.

So what does NASA think it's for? In 140 characters, how does America's space agency justify its existence? Here it is, straight from the panda's mouth:

#WhatIsNASAFor? Space technologies help you in more ways than you may know. Track space back to you: http://t.co/AHcB6UngRt

Any time you give a group of smart people lots of money to work together on technological problems, you're going to get unexpected discoveries and side benefits. Whether you're working on military systems, high-energy physics, digital imaging, or any other big high-tech problems, there will be spinoffs. But in all the world, it seems that only NASA thinks that spinoffs are a raison d'être rather than a natural consequence of doing something else well. Spinoffs (and new technology), especially medical spinoffs, figure prominently in the #WhatisNASAfor thread. Of course, if developing new medical technology is what NASA is for, that's a valid argument, but we should probably incorporate the agency into the Department of Health and Human Services.

Perhaps someone even higher up in government had a better idea. Luckily, the White House's Office of Science and Technology Policy joined in too:

Part of #WhatIsNASAFor: The President visited a class that had "a lesson plan...around the Curiosity rover on Mars." http://t.co/5Hb1lkTgCg

It's a nice story, and the general theme of inspiring students and creating future STEM majors was also a salient theme in the #WhatisNASAfor thread. On the other hand, it's pretty clear that in no way do the educational benefits justify the $2.5-billion expense of the Curiosity mission. Don't misunderstand: Curiosity was well worth the money, not because it makes a great story for kids but because it's producing interesting planetary science. The educational value is a side benefit. In other words, NASA's educational value is fundamentally another kind of spinoff that follows directly from doing interesting things in space. And the vast majority of interesting things in space are done by robots, not humans. The infinite variations of water floating in space are cute, but it's a Mars panorama or a view of Saturn or even of the Sun that will trigger real awe -- and inspiration.

Largely missing was NASA's elephant in the room: its $100 to $200 billion-plus flagship, the International Space Station. As far as I can tell, there were only two governmental or official contributions that even mentioned the ISS. The first was CASIS, the organization that manages the International Space Station's laboratory facilities. It came out swinging, offering perhaps the only official tweet that attempted directly to refute the argument made in Slate.

The other was ISS Research, NASA's mouthpiece for scientific research aboard the station. How is it contributing to NASA's purpose?

The civilian contributions to #WhatisNASAfor tended to hit on similar themes. (The word cloud below represents relative frequencies of certain words in the part of the thread I captured, after meaningless phrases had been removed.) 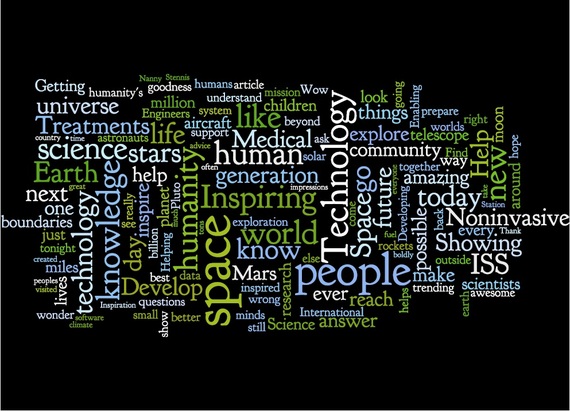 Inspiration, education, tech spinoffs, and the sheer coolness of some of NASA's missions? Wonderful, but not ends in themselves. The need to escape the confines of the Earth, and the manifest destiny of colonizing space? After Apollo, this became unattainable in any meaningful way for quite a while to come.

What's left is science -- and science is where NASA's greatest achievements lie. NASA spacecraft are helping us answer some of the biggest questions in the universe. (Heck, I wrote an entire book describing a revolution in cosmology sparked, in part, by NASA programs like Hubble, WMAP, and COBE.) But that drive is fundamentally incompatible with the agency's perceived need to hype bad science and trying to convince the world that its astronautic boondoggles are producing world-class scientific achievements.

That's NASA's dilemma in a nutshell: despite all the agency has done, despite all it has to offer, so long as human spaceflight is at the core of NASA's existence, it will never evolve beyond a faint echo of its prior self.