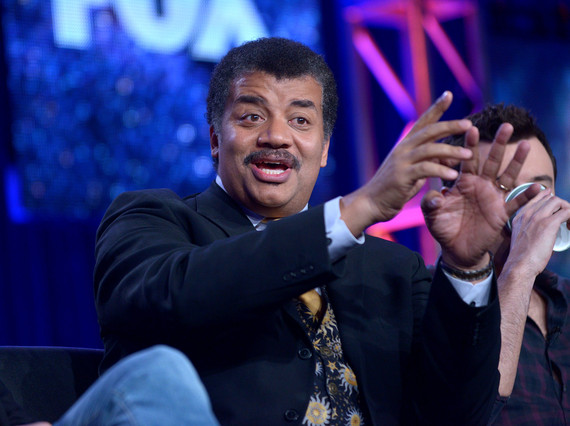 As a mental health professional, I can't help but think about how my favorite TV shows, books and music apply to healthy mental living. For instance, I am a big fan of Cosmos: A Spacetime Odyssey. The images are striking. The writing, brilliant. It taps my imagination, and reinforces my thoughts and beliefs via scientific research and theory.

In a recent episode called "Unafraid of the Dark," I was struck by a discussion about how the factors that influenced the advancement of science and humanity parallel the tenets of a healthy philosophy for daily living.

Here is the excerpt:

It was the work of generations of searchers who took five simple rules to heart:

You can use deGrasse Tyson's five simple rules to encompass a broader view of personal growth, too. Taking them to heart can help us be more scientific in our thinking, which can lead to a more empathic understanding of ourselves and others in our daily lives.

For instance, I connected deGrasse Tyson's first three points to the biases we hold in our daily lives. As briefly discussed in my last blog, cognitive distortions (or biases, a slightly less judgmental word) are always in play. It is not a question of if we are biased in our thinking, but rather a question of if we are aware of such a bias influencing our thinking, e.g. personalization, emotional reasoning, etc.

A tool for all of us to better examine our thinking, and how our thinking influences our moods and behaviors, is Cognitive Behavioral Therapy (CBT). From its inception, CBT has become the most widely researched and evidence-based form of psychotherapy. In some cases, research has demonstrated its being as effective as psychotropic medication.

As Tyson talked about his fourth and fifth points, the frame of CBT was screaming through my mind. Some of the ways CBT provides a more structured and scientific approach to our thoughts, feelings and actions includes identification and evaluation of feelings, "automatic thoughts," intermediate beliefs and core beliefs, role playing, behavioral experimentation, examining the evidence, and many, many other mechanisms.

The most important portion of Tyson's commentary is the fifth point. Tyson talks about how "even the best scientists were wrong about some things," and it's similar to how we can and should move forward once we accept the inevitability of our own errors.

We do not achieve growth in our lives without missteps along the way. Ideally, acknowledging this will help soften our own tender approach and playful response to adversity in our lives when it comes. If we can't acknowledge our missteps, a real danger emerges in which we believe ourselves to be unequivocally right. In doing so, we often lose empathy towards ourselves or others.

Research demonstrates what happens when we lose empathy in our relationships, and communicate with vehicles such as criticism, contempt, defensiveness and stonewalling. The effects can be devastating on marriages, leading to a host of negative effects like lack of communication, emotional flooding, withdrawing from the relationship, even leading to affairs (1).

By better examining our thinking through a more scientific process and softening our internal and external response to failure, we are better able to continue our journeys in personal growth in order to advance ourselves, those around us and, hopefully and ideally, mankind.

More:
Biashealthy livingHealth cbtcosmos
Newsletter Sign Up
The essential guide to taking care of your mind and body
Subscribe to HuffPost’s wellness email
Successfully Subscribed!
Wellness delivered to your inbox