The Azores is a group of nine islands off the coast of Portugal. Their remote Atlantic location serves as an important stop for over 20 species of whales and dolphins to migrate, including: sperm whales, sei whales, fin whales, humpback whales, blue whales, pilot whales, beaked whales, orca whales, false killer whales, striped dolphins, common dolphins, bottlenose dolphins. Bottlenose dolphins are spotted dolphins that pass through the Azores from mid-April to mid-October. 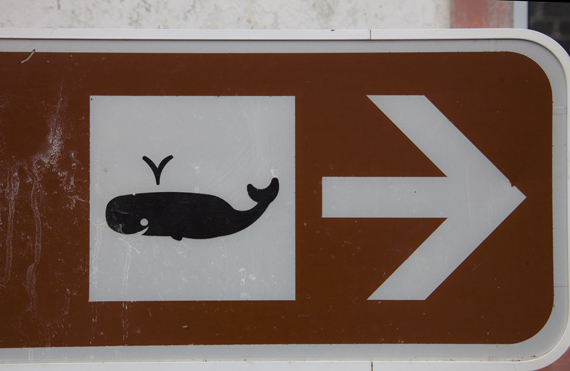 Whaling was introduced by 19th Century New England whalers. The Azorean whaling boat was adapted from the American canoes into a style unique to the world. The antiquated 'Moby Dick era' harpoon whaling techniques was used in the Azores until 1987 whaling stopped altogether.

In 1982, the International Whaling Commission (IWC) created an anti-whaling moratorium on commercial whaling, which the EU formally adopted. After joining the EU in 1986, Portugal outlawed whaling to abide by the EU regulations. 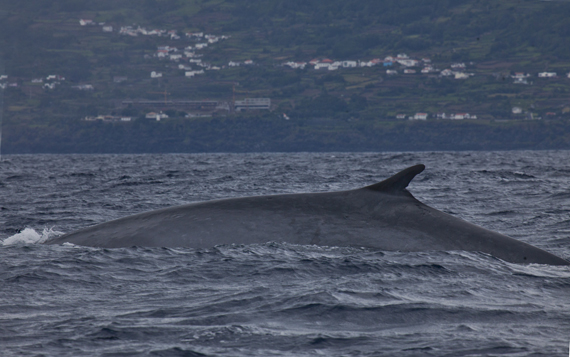 The Azores are an important location for marine science research; this is a yet unnamed fin-blue hybrid whale. Blue whales are the largest animal ever known to live on Earth and fin whales are the second largest mammal.

Today the Azorean economy, once dependent on whaling, has transitioned into an agricultural and tourism based economy -- where whales play a large role. Whale-watching tours have become a popular activity for visiting tourists. Iceland, and Denmark are EU members who rely heavily on tourism and who all continue whaling in spite of the EU ban. 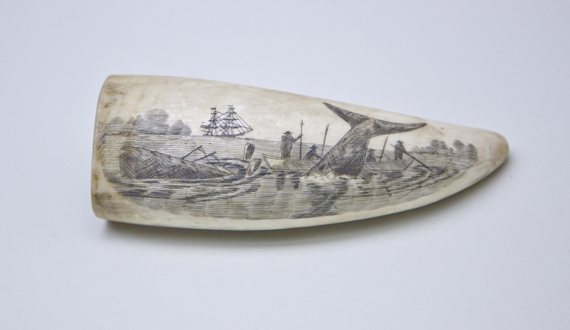 Scrimshaw carving depicting an Azorean whale hunt carved on a whale's tooth as seen on display at the Museu Dos Baleeiros.

Norway objected to the IWC's whaling moratorium in 1993, and continues commercial fishing of minke whales, resuming export of blubber and meat in 2011. A distinct difference between Azorean whaling and the whaling that still takes place in Norway, Iceland, and Denmark's Faro Islands, is that Azorean whalers hunted sperm whales for their oil and amber, not meat. 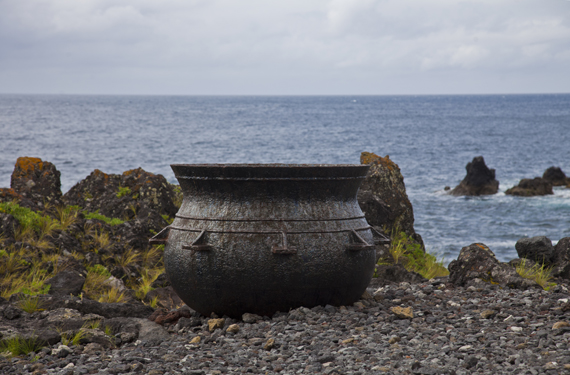 This cauldron was used during whaling to boil whale meat to extract oil.

Though tastes are changing, according to the Whale and Dolphin Conservation (WDC) "the Fisheries Research Institute of Norway commissioned a focus group on the perceptions of whale meat as a food product in Norway. The study found that whale meat had an old-time image and was considered to be an exclusive product rather than a commonly-eaten food stuff. Focus group participants in large part said that they did not eat whale meat on a regular basis, and that whale meat was seen as more expensive than other meats, and that it was considered to be a political food due to the whaling issue." In 2002, the decline in demand, cost the Norwegian government 4 million NOK or 4.5 USD, to destroy 700 tons of blubber lying in freezer storage. The WDC states "much of the blubber had been used for pet food." 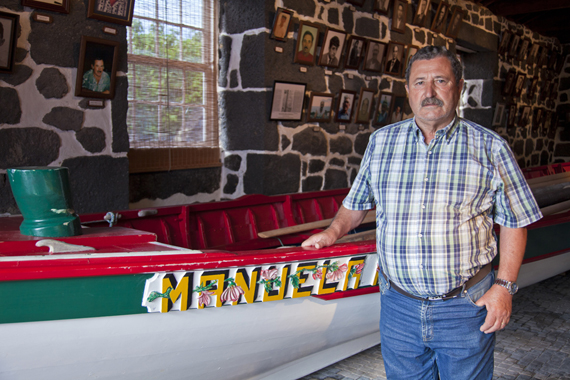 Former whaler Manuel Silva stands in front of the boat his family owned and used for whaling at the Casa dos Boates de Calheta de Nesquim on Pico Island.

Over 1,014,058 people have signed a petition on AVAAZ.org to end whaling in Iceland, where last year's kill quota was 154 fin whales and 229 minke whales. In Iceland 25% of tourists go on whale-watching tours in the hopes to spot 23 whale species, many of which migrate up from The Azores. 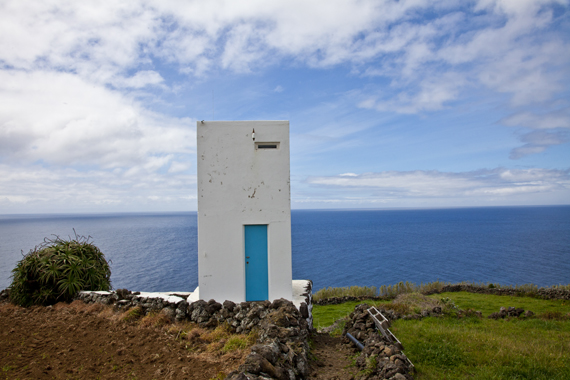 These small whaling-watch towers called Vigias, are now used by whaling companies to spot whales and notify whale watching guides. A perfect example of how elements of the whaling industry are being repurposed.

Whaling was considered an important part of The Azorean culture and now a critical part of their heritage, yet the islands have been able to adapt without it. In fact tourism is more profitable than whaling. Whale tourism earns more money than commercial whaling, as reported by The International Fund for Animal Welfare (IFAW), "In 2008, more than 13 million tourists in 119 countries took sea trips to watch whales and, in so doing, earned the organizers of such trips 1.5 billion euros."

With over 18 whale-watching tour companies in The Azores, some guaranteeing money back if no cetaceans are spotted, at least two whaling museums, and the repurposing of the whaling vessels for annual regattas -- The Azores have become a model for conservation and its economic benefits. While its unlikely Norway, Iceland, or Denmark will end commercial whaling unless tighter EU and UN regulations are made, perhaps they could learn from the example of The Azores.