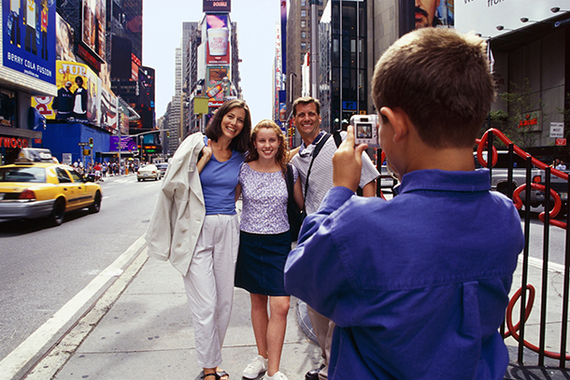 New Yorkers aren't exactly famous for being polite to tourists, but that's just because most tourists don't know how to act in the Big Apple. The good news: It's not so hard. Just follow these simple rules of conduct -- from how to behave on the subway to when it's actually okay to ask for help -- and you'll blend right in on your next trip! Here's the inside scoop on what you shouldn't do in New York City.

Stop in the Middle of the Sidewalk

The majority of city residents don't drive, so the sidewalks are like streets, with the same type of "traffic" laws. Respect them and don't stop dead in the middle of the street to take a picture or to consult your map. Instead, "pull over" to the side so that pedestrian traffic won't run into you.

Get On an Empty Subway Car

It's rush hour on a hot summer day, and a subway train pulls up to the station with every car packed, except for a single empty one. Score, right? Wrong -- odds are, that train car is empty for a reason, be it broken air-conditioning or a spilled bodily fluid. Never go in the empty subway car … trust us on this one.

New York City subways can get crowded! Respect the other travelers and move into the center of a subway car when you board a train. Don't cluster near the doors for 10 stops, making it hard for other people to get on and off the train. We promise that people will move and let you off when it's your stop.

Walk in a Group That Takes Up the Whole Sidewalk

New Yorkers are speed-walking pros -- they have places to be, and walking is the best way to get there fast. It's understandable that tourists want to walk slowly and take in the scenery, but please don't block the entire sidewalk doing it. Walk on the right side in small groups -- and don't hold hands doing so. You'll take up the entire sidewalk and slow everyone down behind you.

Pay for a Statue of Liberty Cruise

Don't waste your money on an expensive boat cruise that goes past the Statue of Liberty. Instead, take the Staten Island ferry, which is totally free and goes past most of the same sights. The ride takes about 50 minutes round-trip, and you can even purchase food and beverages onboard. Snag a seat outside, buy a cheap beer, and get amazing city views!

Sure, Manhattan is what most people think when they think of New York City, but it would be a shame to miss out on the other boroughs when you visit. The four other boroughs (Brooklyn, Queens, Staten Island, and the Bronx) have their own unique charms and are definitely worth a visit. Plus, they're all easily accessible on the subway (or aforementioned Staten Island ferry). Bonus: Restaurants and shopping are usually cheaper in the outer boroughs than in Manhattan!

Eat at a Chain Restaurant

Most New Yorkers go out of their way to avoid Times Square -- it's hectic, full of tourists, and teeming with chain restaurants. If you came to experience the city, why would you eat at the same Red Lobster that you can eat at back home? Live a little and patronize local restaurants instead of chains.

Be Afraid to Ask for Help

New Yorkers may be rude to you if you get in their way, but they'll be nice if you politely ask them for help. Most locals pride themselves on their direction-giving skills (it's a sign that they really know the city), so don't be afraid to stop and ask them which direction is Fifth Avenue or how to get downtown. They really are friendly!

Real estate is pricey in New York City, and that goes for parking spaces as well. New York City has an amazing 24/7 public transportation system, so use it! Don't waste your time fighting traffic or searching for parking spaces. Take the bus or subway, or hail a taxi instead. You'll save time and money and prevent aggravation -- plus you'll get a better feel for the city once you experience getting around like a local.

Skip a Museum Because You Can't Afford It

It's not always advertised, but the admission price at many museums in New York City (even the big ones) is actually just a suggestion -- meaning that you pay what you can afford, even if it's only a dollar. If your budget is tight, consult this list of New York museums where you can pay what you wish before deciding to skip a museum for money reasons.

Read the original story: What Not to Do in New York City by Caroline Morse, who is a regular contributor to SmarterTravel.